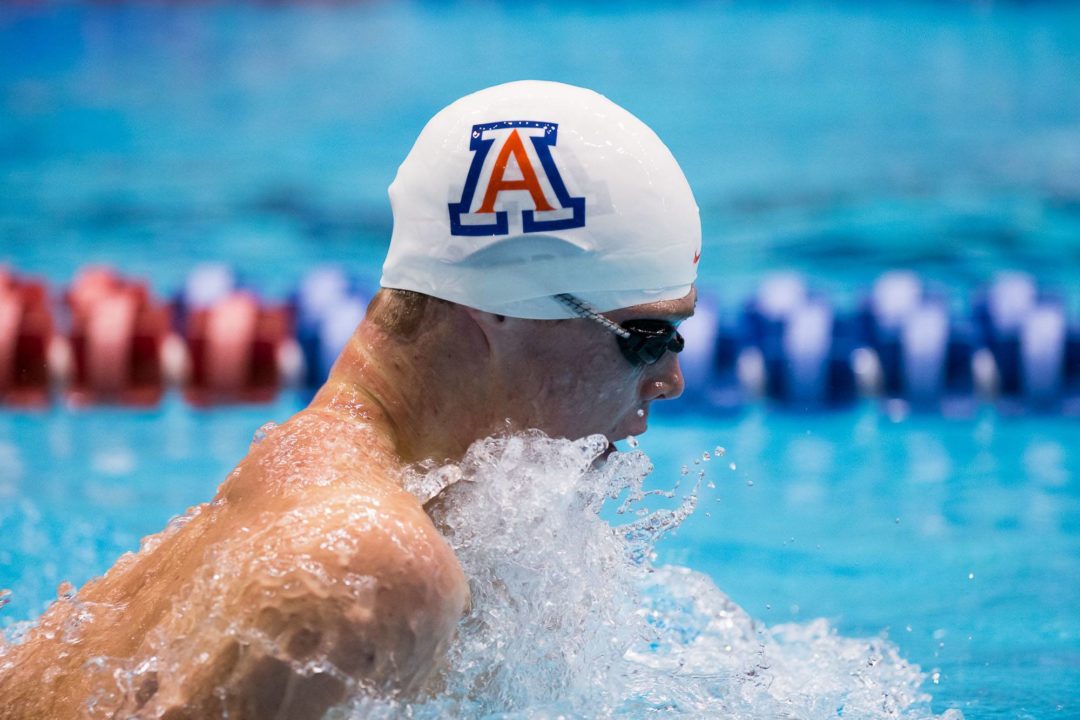 At the time, no man had been under 1:50 in the 200 breast. Only one had ever broken 1:51. To go 1:49 was considered nearly impossible. 1:48 shocked the world. Archive photo via Tim Binning/TheSwimPictures.com

Cordes was a rising phenom, the 2012 NCAA 100 breast champion as a freshman and for many, the future of American breaststroking. In December of 2012, Cordes punctuated his sophomore mid-season rest meet with a stellar 1:50.73 – a time that was eye-popping and barrier-shattering at the moment. At the time, the NCAA record stood at 1:51.4, and Cordes had only been 1:51.97 the year before at NCAAs.

Discussion was quickly started: how long would it take Cordes to break the 1:50 barrier. For many, it seemed impossible, still another huge leap from where Cordes was at. For others, it seemed inevitable.

What no one was thinking about was the 1:49-barrier.

I was on deck at 2013 NCAAs when Cordes stepped to the blocks for his 200 breast. In fact, I had just officially finished my college career with a lifetime-best out of the early heats of the 200 breast, and Cordes made my first race as an official college spectator one to remember.

It was prelims, and Cordes had no reason to expend too much effort. In those days, it took about 1:54-high to make the top 8 out of prelims. Cordes could go 1:53s in his sleep. And because of his signature style – long, efficient strokes, low tempo and low stroke count – it didn’t look like he was trying very hard when he blasted a 1:49.79 out of prelims.

1:49! Cordes had broken the barrier and made it look easy. But in finals that night, he proved his morning swim was truly just a warm-up effort, blasting a 1:48.68 to obliterate all of history in the event.

I still remember the disbelief in the crowd. We had wondered if 1:49 was possible. Seeing 1:48 on the scoreboard seemed a complete shock. Matching that kind of absurd time with the distinct lack of urgency in Cordes’ stroke rate was incomprehensible.

This race still stands up as the high point of the low-stroke 200 breast. Cordes maximized his efficiency and basically threw stroke tempo out the window, providing a blueprint for maintaining speed through a 200 yard breaststroke. At the time of his swim, he was the fastest in history by nearly two-and-a-half seconds.

In the seven years since that swim, seven more men have broken 1:50. In fact, 2018 is the only year where the NCAA didn’t break 1:50, and it was a 1:50.1 that took the crown. There have been 20 all-time swims below the 1:50 barrier, a quarter of them from Cordes. Though his record would eventually fall to Will Licon, Licon is the only man who has surpassed Cordes’s time in the seven years since.

You can relive Cordes’s swim below, noting his incredibly powerful kick and his impossibly-low stroke count – now the standard for top 200 breaststrokers:

Look at the incredible difference in stroke rate and count, even compared to the same event one year earlier, won by Carlos Almeida in 1:51.88.

Stroke counts from the three races are below:

Disgusting. Absolutely disgusting. Man takes 3 strokes and goes out in 12 something meanwhile I struggle to get 3 strokes on a long glide drill

I don’t even go out that fast in a 200 free sometimes. Jeezus christ

I remember taking part in the out loud stroke count everyone was doing during that final. What a race to watch live.