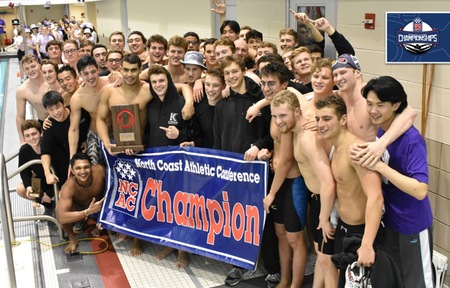 GRANVILLE, OH — The Denison women topped the team standings for the 10th time, first since 2017, as competition wrapped up on Saturday night at the 2020 NCAC Swimming & Diving Championships at the Trumbull Aquatics Center on the campus of Denison University.

Kenyon junior Crile Hart (Pepper Pike, OH/Hawken School) was named the NCAC Women’s Swimmer of the Year after winning three individual event titles and swimming on four runner-up relays. Hart and her teammates started out the meet on Wednesday with a second-place showing in the 800 free relay with an NCAA “B” cut time of 7:23.43. On Thursday, the Ladies captured second in the 200 free relay in 1:31.21 for a “B” cut. The sophomore went on to reclaim the NCAC crown in the 200 IM in record-setting fashion as she posted a time of 1:58.04, which not only surpassed the NCAC record but also earned her an NCAA “A” cut and the top time in the NCAA. The Ladies took runner-up honors in the 400 medley relay in a “B” cut time of 3:42.57. On Friday in the prelims of the 100 butterfly, Hart broke the NCAC record (54.35) before resetting the conference record and claiming a “B” cut with a finals finish of 53.59 to take the event title. On the final day, Hart posted an NCAC record and “B” cut time of 1:56.85 to win the 200 back, before the Ladies finished the meet with a second-place showing in the 400 free relay with a 3:22.33 “B” cut.

In the diving well, Denison senior Naomi Clayton (Lexington, KY/Sayre) claimed the NCAC Women’s Diver of the Year award after winning the one-meter event at the 2020 NCAC Championships with a regional-qualifying score of 426.05. On Saturday night, she posted a second-place finish in the three-meter competition with another regional-qualifying score, as she totaled 446 points.

In addition, Kenyon freshman Olivia Smith (Spanish Fort, AL/Daphne) earned the 2020 NCAC Women’s Newcomer of the Year honors after claiming first-, second- and fourth-place showings in her first NCAC Championship. On Friday, Smith took fourth in the 100 fly, touching the wall in a “B” cut time of 55.30. She then earned the NCAC title in the 100 back in 55.46 for another “B” cut. The next day she closed out her first NCAC championship experience with a second-place finish in the 200 back with a “B” cut time of 2:01.75.

GRANVILLE, OH — The Kenyon men won their first league title since 2008 and their league-leading 24th overall crown, as competition wrapped up on Saturday night at the 2020 NCAC Swimming & Diving Championships at the Trumbull Aquatics Center on the campus of Denison University.

The Lords, who captured the team title with 1,913 points, logged 30 All-NCAC finishes in the 21 events contested and collected 11 NCAC titles over the four-day meet. The Denison men finished second overall with 1,765 points after winning nine events and posting 23 All-NCAC performances, while Wabash checked in at third with 1,264 points and one event win. DePauw finished fourth overall with 1,022 points, followed by Wooster (900), Allegheny (768.5), Ohio Wesleyan (670.5), Oberlin (494), Wittenberg (412) and Hiram (8).

In the diving well, Kenyon freshman Drew Albrecht (Aurora, OH/Aurora) claimed the NCAC Men’s Diver of the Year award after sweeping both boards at the conference meet. Albrecht posted regional qualifying scores in both events, scoring 458.90 points on the one-meter board and 500.05 in the three-meter competition.

Good for Kenyon. Unfortunately Denison is the better built NCAA team, with more depth and top-end talent than the Lords. Denison didn’t score their top swimmer at Conference, and still almost won. I’m projecting a +100 point win by the Big Red at NCAAs.

I wouldn’t say they almost won considering the Lords won by 148 points. And I’m not sure about more top-end talent since the Lords also won more events than Denison. NCAAs will certainly be a different meet and an exciting one to watch.