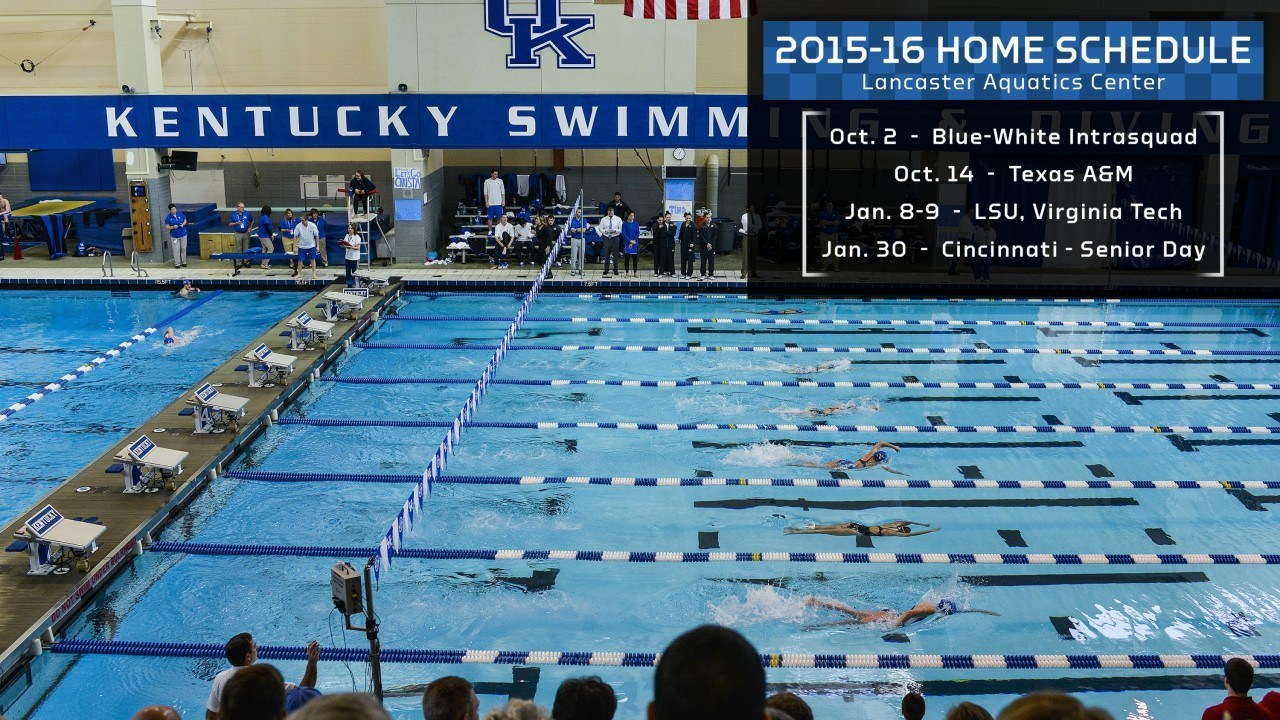 After a record-breaking 2014-15 season, the Kentucky swimming and diving team will look to back it up against some of the nation’s most elite competition. Current photo via Kentucky Swimming & Diving

LEXINGTON, Ky. – After a record-breaking 2014-15 season, the Kentucky swimming and diving team will look to back it up against some of the nation’s most elite competition. As the 2015-16 schedule is unveiled, it once again features a grueling test to get the Wildcats prepared for the postseason.

“We once again face a challenging schedule, but it’s an exciting challenge that will really help us towards the end of the season,” Jorgensen said. “We’ll face some of best teams in the country, which is great preparation for the NCAA championships. As we continue to get better as a program, we want to schedule tough teams that will make us better. It’s a challenge we are excited for.”

The rise of the program in Jorgensen’s short tenure has been hard to miss. Last year, the UK women turned in one of the best seasons in program history. The Wildcats placed 16th at the NCAA Championships, the fourth-best finish in team history and the best since 2007. UK earned a total of 17 All-America accolades, highlighted by Christina Bechtel’s silver-medal finish in the 200 butterfly, the best individual NCAA swimming finish in UK history, men or women.

Add to that a pair of SEC titles from Bechtel and Danielle Galyer, the first swimming conference titles since 1999, and a seventh-place team finish, the women’s best since 2011, and the Wildcats have plenty of momentum heading into the 2015-16 season.

The 2015-16 schedule features 11 regular-season meets in addition to the Southeastern Conference (SEC) and NCAA Championships and the USA National Championships. UK will host three home contests, beginning with Texas A&M’s first visit to Lexington as a member of the SEC on Oct. 14. Last year, the A&M women finished fourth overall at the NCAA Championships.

The Wildcats also welcome LSU and Virginia Tech to the Lancaster Aquatics Center for a two-day event on Jan. 8-9. Senior Day sees UK square off against Cincinnati on Jan. 30. Kentucky will also host its annual Blue/White Intrasquad event on Oct. 2.

“We are excited to compete at home four times,” Jorgensen added. “In the fall, we host Texas A&M for the first time, and that will be a great early test for us. In January, we’ll have an exciting two-day meet against LSU and Virginia Tech. Of course, it will be great to celebrate Senior Day against Cincinnati. We love feeding off of the energy of the Big Blue Nation at home, and we look forward to doing that again this year against some great competition.”

As the Wildcats build towards the postseason, their schedule is full of competition that placed among the nation’s best at last year’s NCAA Championships. In the SEC alone, seven women’s teams, including UK, and seven men’s teams placed in the top 20 nationally in 2015. Kentucky faces all of them at the SEC Championships, Feb. 16-20 in Columbia, Mo.

In the regular season, UK will face several perennial powerhouses on the road, in addition to hosting Texas A&M in the home opener. On Oct. 30, the Wildcats face Tennessee, Indiana and North Carolina, who all finished in the top 19 at both the men’s and women’s NCAA Championships in 2015.

The following weekend, another quad meet sees Kentucky go up against Missouri, Northwestern and SIU after Mizzou finished in the top 15 in both men’s and women’s NCAA competition and NU placed 29th at the men’s national championships. On Jan. 23, UK travels to Louisville for an in-state clash against a men’s team that finished 15th and a women’s squad that placed 6th in the country in 2015.

Select individuals will also compete at the USA Swimming and Diving National Championships. The swimming event will be held Dec. 205 in Federal Way, Wash., while the diving competition will be Dec. 15-20 in Indianapolis, Ind.

Postseason competition kicks off at the SEC Championships, hosted by Missouri Feb. 16-20. The NCAA Women’s Championships will be held March 17-19, while the men’s event is the following weekend, March 24-26. Both national champions will be crowned in Atlanta.