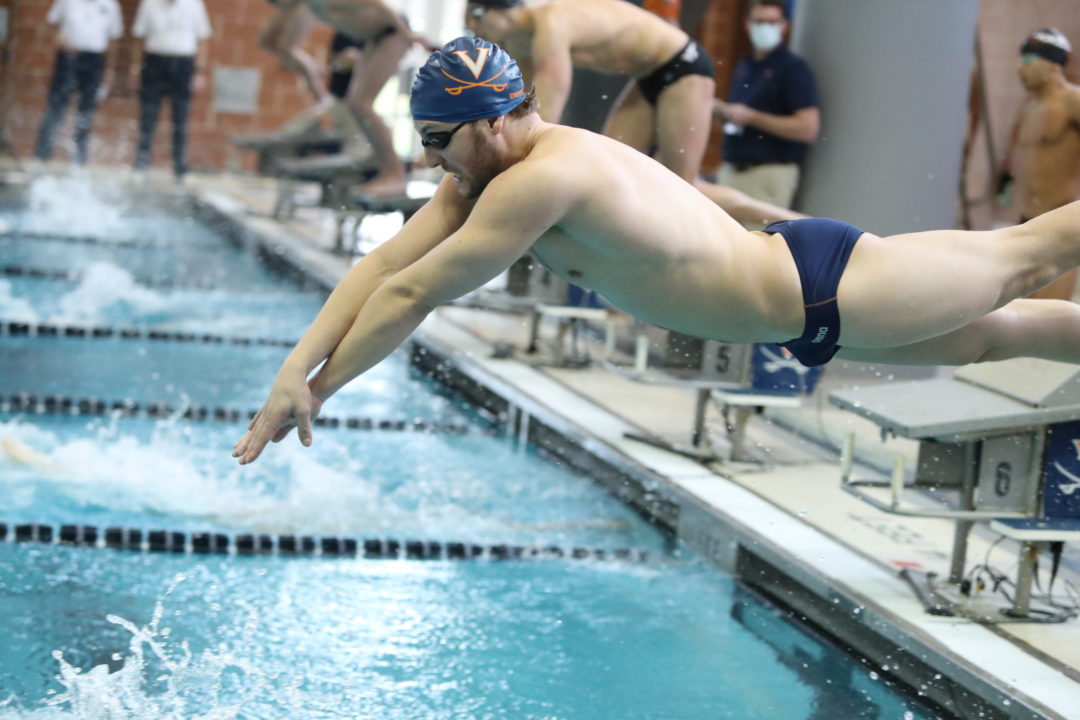 Senior Keefer Barnum holds came within a whisker of his own 100 breast school record, punching a 52.40 that moves him up to #11 in the nation

It’s been a good day for the UVA breaststroke group. This morning, Kate Douglass went 2:03.93 in a 200 breast time trial, making her the 5th-fastest woman ever in the event. Tonight was the men’s turn, and while they didn’t do anything quite as historic, a trio of Cavalier swimmers either clipped, or just missed, lifetime bests in the 100 breast.

Senior Keefer Barnum holds the Cavaliers’ records in both the 100 breast (52.38) and the 200 breast (1:52.91), and tonight he came within a whisker of the former mark, punching a 52.40 that moves him up to #11 in the nation, pending other results from this weekend. Barnum may have been gunning for the pool record, a 52.12 that former UVA swimmer and US Olympic Ed Moses swam in 2002 after he forwent his final two years of NCAA eligibility in order to turn professional.

Barnum was flanked during his swim by a pair of teammates who both set lifetime bests. Freshman Noah Nichols went under 53 for the first time, touching in a 52.90 that would’ve been fast enough to make the A-final at last year’s ACC Championships.  Senior Matthew Otto, who took 18th at ACCs last year, knocked 0.41s off his lifetime best tonight, touching just a stroke behind Nichols at 53.26. The 100 breast is shaping up to be a bit of a bloodbath in two and a half weeks: only three then-seniors scored last year, and none in the A-final.

Paige Madden dropped a 1:51 in the 200 back, breaking pool record held by Beata Nelson

Beefer is also a very talented musician-check out his song “Her Name is Midnight”!

Been watching Beef since he was winning every 10&U event at KY States.