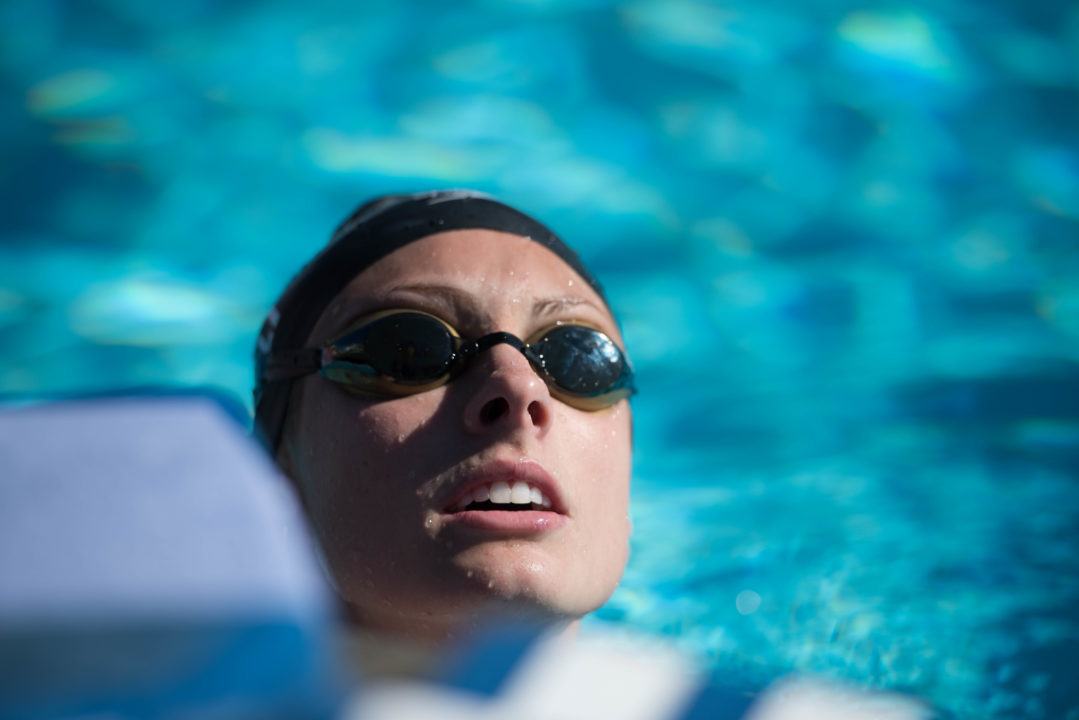 Katie Meili has broken the American Record in the 100 short course meters breaststroke, even though she’s not the fastest American ever in the event.

Meili’s swim, while an American Record, is not the fastest 100 SCM breaststroke by an American woman.

Any time anything happens in 2009, red flags go up everywhere because it was in the midst of the infamous polyurethane suit era that saw almost every World Record broken multiple times. Because Soni’s swim was done at the end of 2009, she fell into a gray area. FINA was still allowing those polyurethane suits to be used, so her swim was eligible for the World Record, but USA Swimming had already outlawed them, so American Records could not be broken while wearing them.

That’s how one arrives at Meili’s swim being an American Record, but not the fastest done by an American in legal competition.

The 5 fastest performers in history:

Meili won a bronze medal in the long course version of this event at the Olympic Games less than a month ago.

The suits were fair game everyone used them, so saying it gave an unfair advantage is silly and as we’ve seen especially on the woman’s side all these records are beatable

Ive never facepalmed so hard in my life

I agree with your last statement except the women’s 200 fly which is impossible to beat. But saying the suits were fair game cmon.. Back in the day definitely since everyone used them. But after the ban of course not. Im of the opinion that every suit world record should have been banned. For example, the 100, 200 free, 200 fly, 200 back.. even the 100 fly are just insane records extremely hard not to say impossible to beat..

I know exactly. Everyone was using them basically so everyone was on same playing field for most part. Phelps couldn’t wear it cause of his contract with speedo do he wasn’t on the even playing field but most part good majority of swimmers had them

He did wear a suit that is banned though so he also got an “edge” so should we say Phelps doesn’t have any world records?

Look at Phelps’s 2007 results. He put up some pretty insane times wearing a textile suit.

Polyurethane suits didn’t give everyone a fair advantage and that’s why they were banned.

The strongest argument against the use of suits relates to alterations in body angles. Basically, if a swimmer has poor technique (specifically poor body position) then the floating effect of the suit would flatten that swimmer out and reduce form drag significantly. Swimmers that were already able to swim with flat body angles without a suit were not afforded this advantage when they put on a suit since their body angles are already closer to this ideal angle and there is less potential improvement to be made. Thus, suits were found to give swimmers with bad technique a greater advantage than those with good technique.… Read more »

By fat you mean muscular? I dont recall any elite fat swimmers back in the day.. except Ian Thorpe.. lol

Really? I can recall a number of them…not naming any names though!! 😛

@SPRINTDUDE9000: There is also some other point with high-tech suit effect that needs to be studied and is not covered with your explanation.
Only four swimmers have broken 2008-2009 records: Ryan Lochte, Akihiro Yamaguchi, Adam Peaty and Ryan Murphy. There is only 5 of 20 not suit records.
On the women side the situation is quite opposite: only 6 of 20 suit records left. And three of them under real threat: 4×200, 50 and 200 free. It can be simply because there is the Golden Age in women swimming with such titans as Katie Ledecky, Cate Campbell, Sarah Sjostrom, Katinka Hosszu and bright stars like Meilutyte and Franklin. Or high-tech suits are not that helpful to ladies.
… Read more »

It’s because compared to men, the current suit-cut for the ladies still covered most of the body surface area. Remember the compression.

Yeah but now people aren’t using them so it’s unfair to compare someone now to someone back in 09 who had the suit.

The asterisk belongs on Soni’s time, not Meili’s. Will be great to see Meili or King take down the rubber time.

A lot of tech suit records may have broken since that infamous 2009 world championship, but one can only wonder how long the ridiculous 2:01 women’s 200 fly will last

A very motivated flyer to do what KL did to distance freestyle and to the range of events. Hard to come by but what a treat for spectators when she shows up.

only a man will break that record

Something was going on in 2009 with her and the suit just helped cover it up. A crazy WR in a year of crazy WR’s. Not as noticeable at the time but within 2-3 years, it became obvious. Look at where the record was set.

As crazy as it sounds, I would say it’s in range by 2024 is a great swimmer comes along.

Of course, Adam Peaty is the most dominant swimmer in one event in the world (except for maybe Sarah Sjostrom’s 50 fly WR, which is maybe the most ridiculous swim I can think of), and it’s somewhat unreasonable to expect that… Read more »

The suits may consider to be a fair game. But as SPRINTDUDE9000 explained even that is questionable.
The world records achieved with the help of high-tech suits are not fair. That is no different than swimming with fins. It is completely different type of competition that has to keep its own records separately.

Swimming in high-tech suit or with fins both can be considered assisted swimming. That is the reason fins competition was mentioned.

I think the point UBERFAN is making is based on your comment “That is no different than swimming with fins.”.

Yes you are correct they are both assisted swimming, but they are by no means on the same level. The impact of fins is much greater than the impact of the high tech-suits. I’ve seen average swimmers absolutely shatter world records with fins on.

It was taken out of context. Keeping suit times as world records for traditional swimming competition is of the same level of ridiculousness as doing that with fins records. It is no different in terms of ridiculousness. But thank you for getting my point anyway.

Amazing job! Meili has been phenomenal this year.

I want to see Morozov do that !!