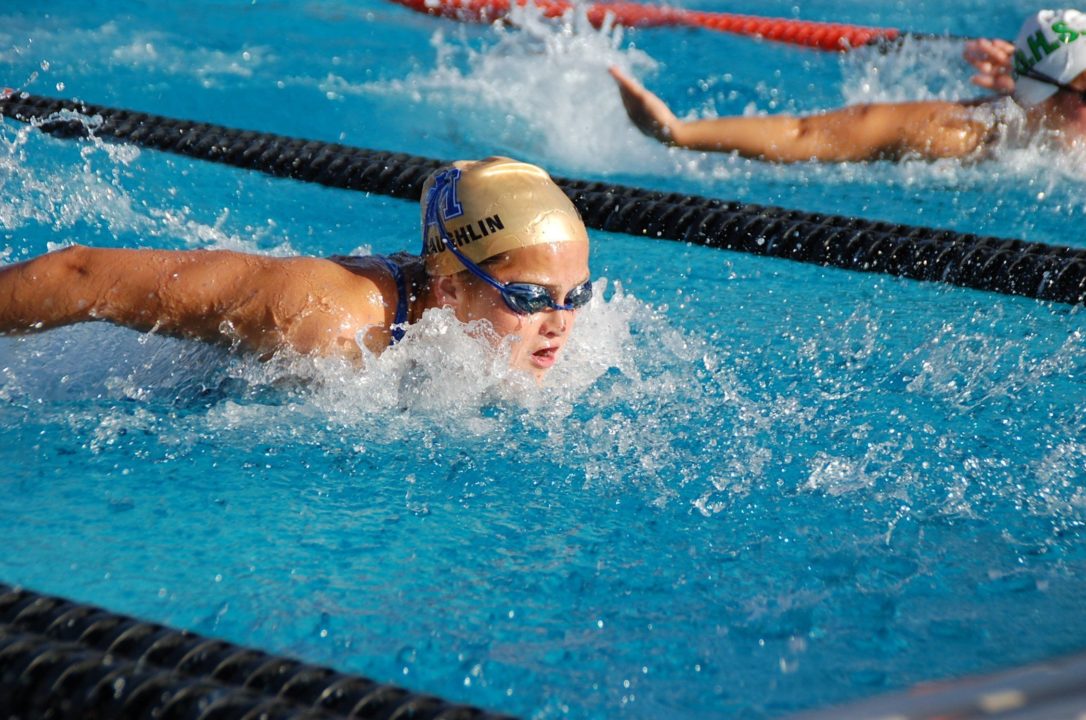 It hasn’t exactly been the smoothest of junior seasons for Katie McLaughlin in California’s Southern Section. Mid-year, she transferred out of... Current photo via Anne Lepesant

It hasn’t exactly been the smoothest of junior seasons for Katie McLaughlin in California’s Southern Section. Mid-year, she transferred out of JSerra High School, where she’d had so much success with her mother as coach, to Santa Margarita Catholic High School.

That didn’t stop her from having a fantastic season competitively, however. In the California Southern Section’s biggest division, Division I, she swam a 51.78 in the girls’ 100 fly. That gave her a two second win (ahead of Tamara Santoyo – in an also-fast 53.75), and also broke the girls’ National Independent High School Record in the event.

The swim took down a 52.44 done by future Olympian Kathleen Hersey of the Marist School in Atlanta in 2008.

This swim also bettered the overall National High School Record, which was a 51.92 set by Jasmine Tosky of Palo Alto High School on the other end of the state of California in 2011 (though NISCA never formally recognized this record on their record list, for reasons unknown).

McLaughlin in the process broke her own Division I meet record, which she also did in the 200 free earlier with a 1:44.66. Though she’s still a part of two free relay Division records under the JSerra banner, this broke both of her individual marks from her former team.

She did break the overall 100 fly record, but the public record belongs to Jasmine Tosky 51.9 from a few years ago

Thanks Coach – for whatever reason, NISCA never recognized Tosky’s record. We’ll note above.

Tosky’s national Public record came in the CCS prelims that year. Maybe that’s why it was overlooked.

Again, this is short course yard time…. have yet to see what she does LCM