Katie Ledecky: Train the Way You Want to Win 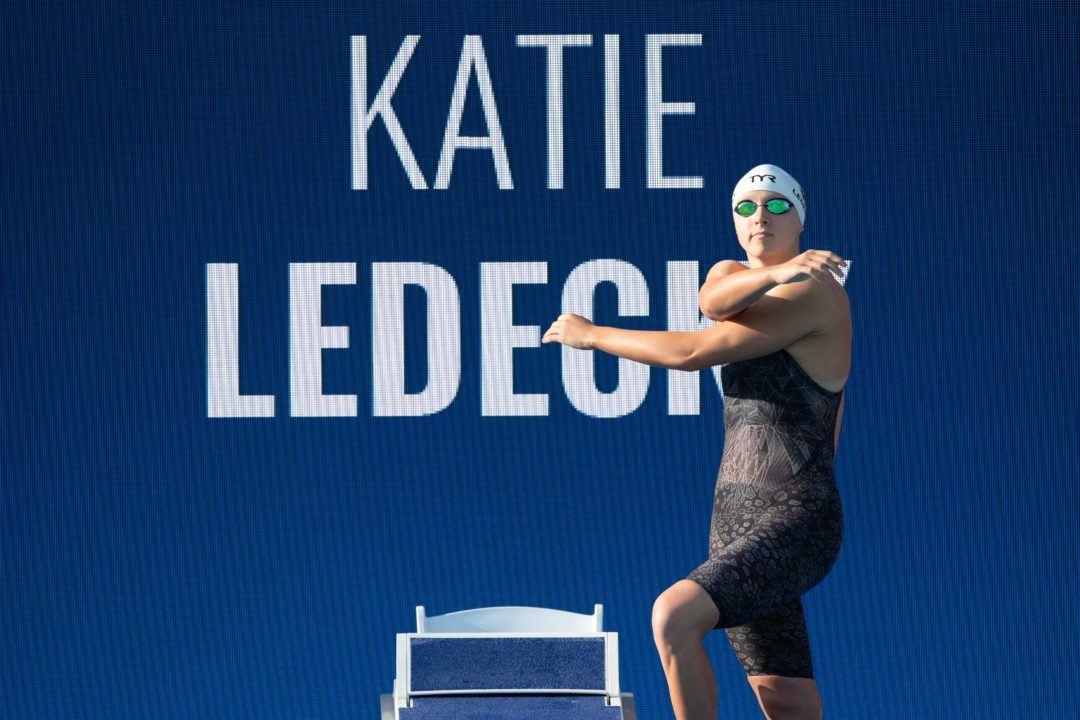 How you practice is how you race. Here's a powerful lesson from Katie Ledecky on how training habits become racing habits. Current photo via Mike Lewis/Ola Vista Photography

On August 9, 2016, the finalists for the 200m freestyle got up onto the blocks at the Rio Olympics. In lane five, American Katie Ledecky. She is about to face the toughest and hardest race of her schedule.

Ledecky would be facing off against Sarah Sjostrom of Sweden in four, world record holder Federica Pellegrini of Italy in three and Emma McKeon of Australia in lane seven.

Five of the fastest ten performers of all time in the event were on the blocks.

Although Ledecky was the world record holder in the 400 and 800m freestyles, the 200 was basically her “off” event.

There was no guarantee of gold.

Sjostrom was in top form, already having won gold and setting a new world record in the 100m butterfly. There was also Pellegrini, whose best time of 1:52.98 was the fastest in history.

There was nothing certain about the outcome. But there was one thing for sure—Ledecky had rehearsed the gold medal finish she would need in practice a million times.

In the fall of 2013, Katie Ledecky and her coach at Nation’s Capital, Bruce Gemmell, sat down and hashed out some goals for the Rio Olympics, three years on.

Things had gone well—real well—at Worlds the previous summer in Barcelona. Ledecky had posted the second fastest time ever in the 400 free and broke world records in the 800 and 1500m freestyles—the latter by over six seconds—on her way to winning four gold medals.

Although the world and American records understandably got all the attention, Ledecky’s lead-off swim on the 4x200m freestyle relay had been a personal best time of 1:56.32—and good enough for 7th fastest in the world that year.

Which got the coach and swimmer thinking: Could they take a shot at the 200-400-800 freestyle sweep in Rio?

Ledecky and Gemmell hammered out some goal times. The plan was to beat the world record in the 400m freestyle and swimming a casual 8:05 in the 800m freestyle—a time that was eight seconds faster than her swim in Barcelona.

And yup—gold in the 200m freestyle.

But if there was anybody who was more than happy to take a rip at it, it was Katie Ledecky and her legendary work ethic.

Building the race you want starts in practice

As Rio neared, Ledecky continued to slash and cut at her world records.

The 200 freestyle was coming along nicely, too—by the time Worlds came around in 2015, Ledecky found herself at the top of the podium in the event, out-touching Italy’s Pellegrini by 0.16 for the gold.

Ledecky was putting plenty of distance between herself and the competition in the longer races, but she knew that the 200 in Rio would be close. Gold would come down to who got their finger tips to the wall first.

And so, Ledecky worked on getting her fingers to the wall in practice.

During sets she would finish reps the same way she planned to close out the final 15m of the 200 freestyle: her feet picking up to a thunderous churn, her stroke tempo picking up, putting her head down and sprinting for the wall.

Gemmell would watch from the pool deck as she conditioned herself to finish in a flurry. Over and over she would charge at the wall, building up an inventory of “perfect” finishes.

Ledecky was building the finish she wanted.

Willing herself through the pain so that when it came down to it, when her legs are gassed and her lungs are on fire, she would be able to rely on the finish she’d practice a million and a half times.

“She’s going to get her hand to the wall first.”

Ledecky took it out quick in the final. She’s got one gear—go—and the plan was to take it out fast and bring it back faster.

On the third 50 she had the lead, with Sarah Sjostrom on her shoulder. At 175m, it looks like Sjostrom just might reel in Ledecky.

Ledecky did the exact same thing she’d done in training.

“When Sarah pulled up even, I thought, I’ve seen Katie finish that race more than a thousand times,” said Gemmell. “She’s going to get her hand to the wall first.”

Ledecky’s arms kept rolling, her kick kept spitting up white water, and she barreled into the wall to win gold in a time of 1:53.73, Sjostrom second in 1:54.08.

How you train is how you race

Watching the performances of elite swimmers it’s easy to think that it’s all talent, or that’s it all easy. Those championship performances are built by hand in practice. Daily. Over and over again.

By finishing at a full clip over and over in practice Ledecky didn’t need to think about what to do, or how she was feeling in the water, or what the competition was doing. She simply relied on what she had done in practice.

The benefits of being able to auto-pilot better competition habits in practice are obvious: less overthinking, less second-guessing, and the confidence to know that your best performance will show up for you on race day.

“No wonder she can do that in the pressure cooker at Rio,” says Gemmell. “She knew exactly what she was doing in practice, over and over again.”

When you head to the pool today, make the decision to train the way you want to compete.

The way you finish each lap on a full, lunging stroke with your head down. Attack the walls. Swim with race pace technique. Be competitive with yourself and your teammates. Increase the pressure.

Each day you go to the pool, you are carving out a performance. Make sure it’s the same one you want to show up on race day with.

Thank you for the article about this race. It deserves this. But as in the case with Ervin’s relay story the final race of W200FR was more complicated than just swimming like a robot last 15 meters. Katie did make a mistake in this race that happened to be costly. She almost missed the second turn starting it too far from the wall and that significantly decreased the advantage she built up at fast second fifty. I think it was the plan against Sjostrom to focus on the second fifty. It worked in Austin in January same year. But because of this weak turn she found herself almost even with Sarah starting last fifty. It looked like Sjostrom almost caught… Read more »