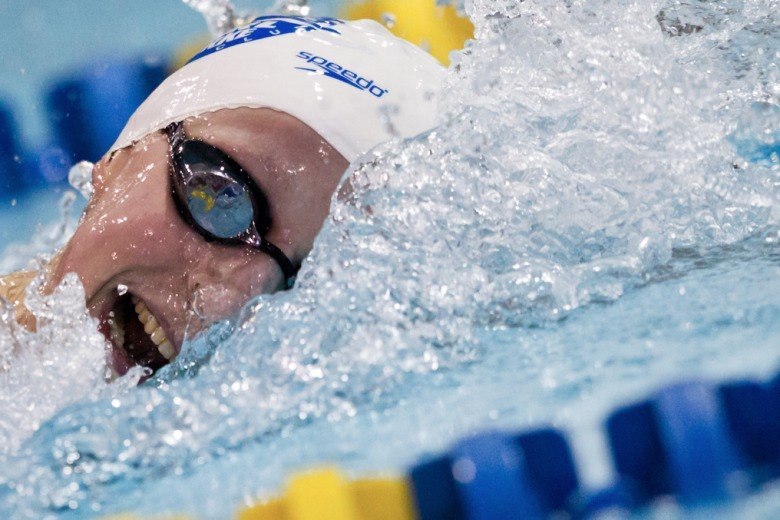 Nobody even came close to Katie Ledecky, who put up the world's second-fastest 400 free this year despite the mid-season meet. (File photo: Tim Binning/TheSwimPictures.com)

The first night of the first ever Mesa Grand Prix, hosted by the Mesa Aquatics Club, put fans and swimmers outside under the lights under the setting Arizona sun. With a giant video board rented for the event, and athletes making themselves quite accessible in the open layout of the complex, this meet has on the first day already established itself as one of the fan favorites.

The fast times provided on the first day of action helped add to that electric atmosphere, though, especially in the freestyle races.

In the final of this women’s 100 free, just as expected, American high school swimmer Missy Franklin dropped way down from her prelims swim to go a 54.27 and take the event victory. She’s raced as many Grand Prix meets over the last few years as anyone has, and she’s really managed to perfect the pacing between prelims and finals. This is a skill that can become increasingly valuable for her, given that she takes on such typically-big event schedules.

That’s more unprecedented speed for Hosszu: a two-tenths drop from prelims. She’d never been better than 55 seconds coming into this meet.

Katie Ledecky won the B-Final in a lifetime best of 56.00.With her eyes on a spot on the 800 free relay in Barcelona, that’s a great improvement of speed and puts her in good position to get to the 1:57 she’ll need to make that a reality.

In the morning heats, Cal Aquatics swimmer Nathan Adrian was the only swimmer under 50 seconds, and was well ahead of the field.

Three guys besides him broke that barrier in finals, but Adrian cranked his sprinting up another notch by being the only guy under 49 seconds in finals. There, he won in 48.42, about half-a-body-length ahead of anyone else in the field.

Adrian’s splits were 23.10-25.32, which says that he’s already right on his timing, even with two months to go before Worlds Trials.

Ricky Berens was 2nd in 49.06, followed by South African swimmer Darian Townsend in 49.73 and SMU/Lithuanian swimmer Mindaugas Sadauskas in 49.78.

Cal’s Caitlin Leverenz and Texas A&M’s Breeja Larson hit the final turn of this 200 breaststroke final about even, with Leverenz holding a slight lead. With a great closing 50 meters, though, perhaps urged-on by the fervor of a hometown crowd, Larson ripped through the last length. She split 37.53 on that closing distance to win in 2:28.03 as Leverenz faded to 2nd in 2:29.13.

After a lackluster prelims, the men’s 200 breaststrokers significantly turned up the heat in the evening session. That began with U.S. Olympian Scott Weltz winning the B-Final in 2:16.45.

Those two were well ahead of the field at the final touch, but it wasn’t that way the whole race. Clark Burckle went out hard in this race, turning in 1:04.35, and being dead-even with Alexandrov and Johnson at the 150. He paid for his swift opening on the final 50, though, and ended up fading all the way back to 2:15.91: almost a second-and-a-half behind the winner.

16-year old Venezuelan Carlos Claverie was 4th in 2:16.94; that’s about a second slower than his top-seeded prelims swim.

Katie Ledecky didn’t get to swim this 400 free at London, where she lit the world on fire with her amazing 800 gold medal victory. The first-half split of that 800, however, became one of the fastest 400 freestyles in the world last year, so there was a lot of anticipation about this Grand Prix meet and her first major long course swim of the 400 free since the Olympic Trials.

Ledecky certainly didn’t disappoint either the fans in Mesa, or those watching at home, as she won in 4:05.21. As she likes to do, Ledecky pushed the pace early in this swim (2:00 halfway) to put everyone away early. That time would have placed her 6th in the B-Final in the men’s race.

With Katinka Hosszu well back in 4:11.72 for 2nd, and Chloe Sutton behind her in 3rd in 4:12.00, Ledecky’s swim is by far the focus of the final. Her swim passes Spaniard Mireia Belmonte as the second-fastest in the world this year; behind only Camille Muffat’s 4:06-low in France.

This was another lackluster prelims swim, but just like the 200 breaststroke, things came alive in finals of this race. Matt McLean took the race out to a big lead, and though the 800/1500 specialist Michael Klueh made up some ground in the last 200 meters, McLean had just enough left at the end to win in 3:51.95. That’s about the same time he went on this same weekend last year.

Kelsi Worrell’s 2-month-long ride of momentum hit a little hiccup in the 100 fly A-final. She was the first to stop the clock, in 59.48, but was DQ’ed for a 15-meter violation. Still, she comes away with the two fastest swims of the day in a field that included better than half-a-dozen Olympians.

The disqualification left Claire Donahue, one of those Olympians, with the win in 59.58. She went out really hard in the race (27.33 at the turn) as she likes to do. Her Olympic counterpart Dana Vollmer, who also pushes the front-half of her race, was about half-a-second slower at the turn and wound up 3rd in 59.99.

In between the two was Katinka Hosszu in 59.80. That’s her third runner-up finish in as many events on the day.

Cal senior-to-be, and Polish international, Marcin Tarczynski was a 52.83 to win the men’s 100 fly final: the last individual race of the night. That is less than three-tenths away from his lifetime best, and leaves him in the world’s top 10.

He beat his teammate Tom Shields, who was 2nd in 52.99. Shields was almost an identical time at his first meet post-NCAA’s last year.

Stanford post-grad Eugene Godsoe was 3rd in 53.28, followed by his training partner Bobby Bollier in 53.82.

Nathan’s swim was probably the most impressive, with Katie’s a close second. The venue is wonderful. Fans are right on top of the action. I’m guessing tomorrow night will be packed. Best feature is the “shark tank”, where kids stand together and the top 3 swimmers in the event throw signed toy sharks into the crowd of kids.

Correct and it was great to see her correct Rowdy in her interview. Katie is clearly dialed in and realizes where she and her main competition stand. Team USA is fortunate to have such a young and astute athlete in their squad.

totally agree. katie is the REAL deal…and in many ways is just as impressive as missy.

i LOVE that she knows exactly what Muffat went last week. such a sign of great things to come!

I just watched that. It’s funny because most swimmers say they don’t focus on what other people are doing and you know that’s a lie.

Most swimmers do.. it is just guys like Rowdy who do not.. watching him during 2008 summer was even funny when he said he was “surprised” that a lot of guys who were the fastest qualifiers actually won..

Haha.. totally agree.
Rowdy needs to educate himself and read information before he does his job as commentator for world championships.

I noticed that as well and found myself thinking that such things are a lot more relevant in her life than they were this time last year. The baby of the 2012 team is growing up fast.

I’d go with Ledecky as best swim of the night, but it’s also great to see Adrian so consistent.