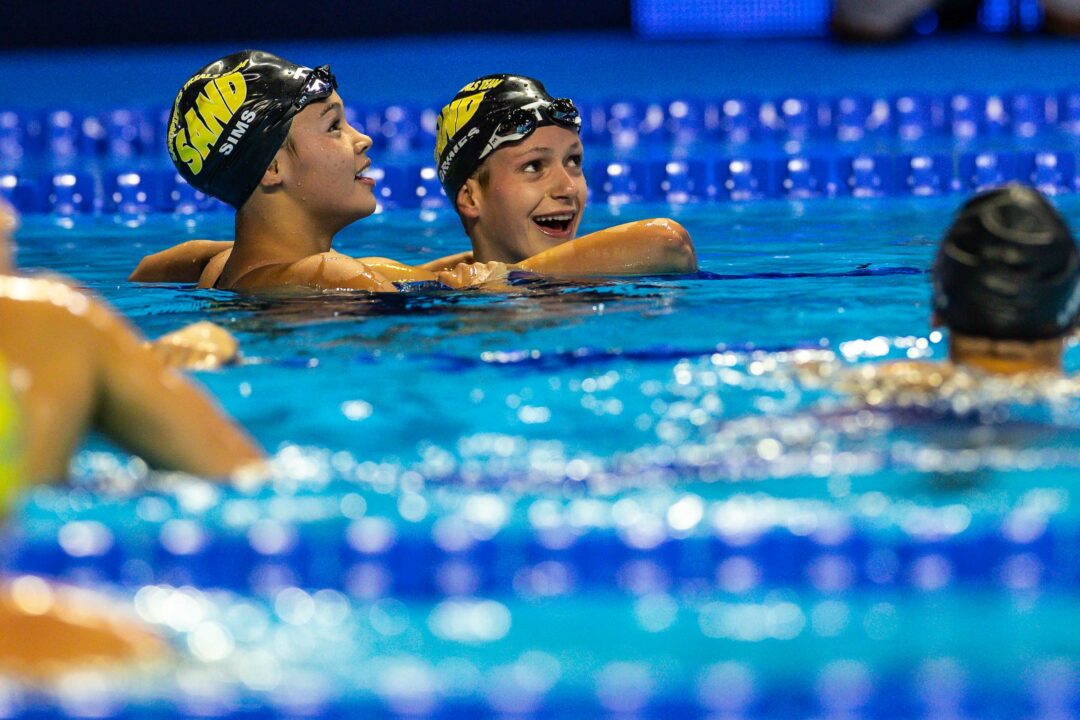 Among the teams in attendance were the Sandpipers of Nevada, who sent a handful of swimmers to the Tokyo 2020 Olympic Games. They used this meet as a replacement for the canceled USA Swimming Knoxville Pro Swim Series event.

To kick off the meet, 14-year-old Claire Weinstein (Sandpipers of Nevada-SAND) dropped 8.93 seconds earning a best time and first place finish in the 800 meter freestyle with a time of 8:32.51. Weinstein out-touched SAND’s Bella Sims who swam to a time of 8:32.67. Sims was a member of the 2020 US Olympic Team swimming on the 800 freestyle relay.

The meet included several showdowns between Olympians Bella Sims and Katie Grimes. They shared four of the same events. Sims came out on top in the prelims SCY 400 IM swimming a time of 4:07.08. Grimes won the LCM 400 IM at finals swimming to a time of 4:41.37. Sims finished in second place swimming a time of 4:46.37. The two also battled it out in the 200 freestyle. Sims swam a time of 1:46.12 SCY earning her first place headed into the final. In the LCM final, Sims (1:59.27) out touched Grimes (1:59.42) to earn third and fourth place finishes respectively.

Cal commit Kathryn Hazle (North Coast Aquatics-NCA) swam to a huge lifetime best in the LCM 200 breaststroke in finals. She won the event in a time of 2:33.51. Her previous best time was 2:37.14 which she set at the 2021 Summer Championships West.

Anders Aistars (Unattached), who recently flipped his commitment from USC to Harvard, was just off of his 50 freestyle best time of 20.71 SCY in prelims as he swam a time of 20.87 SCY to be the top seed headed into finals. Aistars earned the victory in finals as he swam to a long course best time of 24.11 in finals.

Grimes’ 1:53.3 200 back is pretty dang elite for a teenage distance specialist too

Wow Claire Weinstein’s 1:58.5 she could be the missing link for the 800 free relay next summer if McLaughlin and madden are still at thier prime

I think Madden will be on, McLaughlin is a little more inconsistent so one or 2 of the teens could take that spot.

So if Weinstein was first in 1:58.5 and Sims was third in 1:59.2, who was second? That seems like a significant time to report.