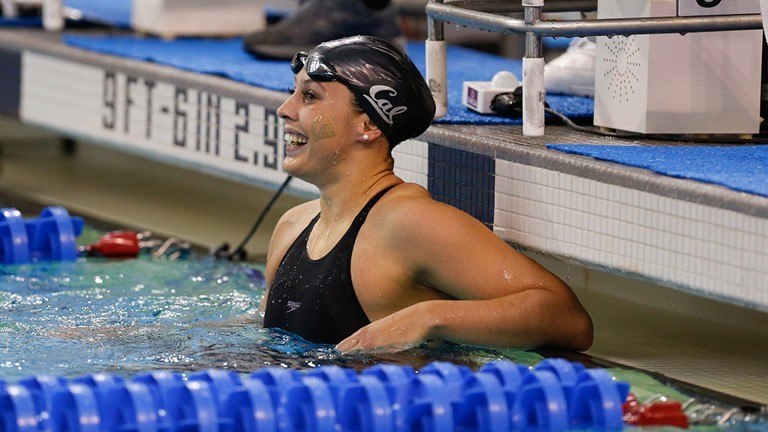 Junior Kathleen Baker, who set an American record while defending her NCAA title in the 200-yard backstroke last month, was named Cal's MVP for the second year in a row at the women's swimming & diving team's annual banquet Sunday afternoon. Current photo via Tim Binning/TheSwimPictures.com

BERKELEY – Junior Kathleen Baker, who set an American record while defending her NCAA title in the 200-yard backstroke last month, was named Cal’s MVP for the second year in a row at the women’s swimming & diving team’s annual banquet Sunday afternoon.

Other awards at the banquet went to:

Bilquist, with a 3.77 GPA as a media studies major, earned first-team Pac-12 All-Academic honors this past season. In the pool, the junior won the B final of the 50 free, placed 10th in the 100 back and took eighth in the 100 free in addition to handling legs on four top-3 relays at NCAA’s. She was also part of four winning relays at the Pac-12 meet.

Light, a sophomore, set personal bests in four events during the year and won the B final of the 100 back at the Pac-12 Championships. McLaughlin reached the championship final in three different events at the NCAA meet – 100 butterfly (6th), 200 freestyle (8th) and 200 fly (4th) – and the junior was a part of four relays. Tuck, a freshman, showed great improvement and enthusiasm as the season progressed, setting personal bests in the 100 breast and 200 IM at the Pac-12 meet. LaMay advanced to the NCAA Championships for the third year in a row on the 1-meter board, while the junior placed sixth on 1-meter at the Pac-12 meet.

Freshmen Darcel and Neumann both provided big points for the Bears at the NCAA Championships. Darcel was eighth in the 400 IM and 16th in the 200 IM. Her best time of the year in the 400 IM (4:03.00) put her No. 2 in school history in the event. Neumann was fifth in the 200 free (top freshman in the country) and 15th in the 100 free in addition to help on a pair of relays at NCAA’s.

As a team, the Bears finished second in the country at the 2018 NCAA Championships – the 10th year in a row they have placed among the top three. Eleven members of the team earned All-American honors for scoring individually or on a relay or helping a relay quality for finals. Baker, McLaughlin and Bilquist each earned All-America recognition in seven events – three individual and four relay – the most possible.