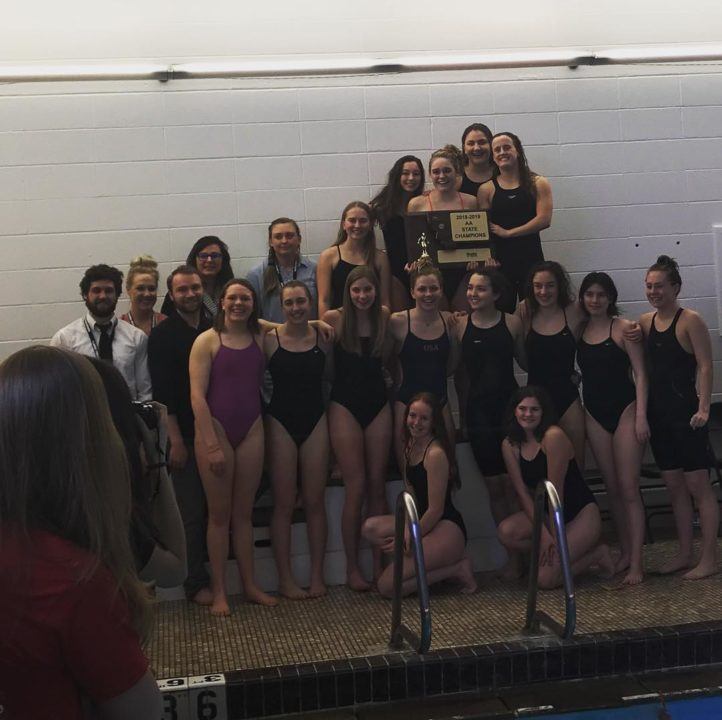 There are few things in sports as consistent as the outcome of the Montana AA girls’ state championship meet. For the 6th-straight year, Missoula Hellgate High School has come away with the title among the state’s biggest schools, while Bozeman placed 2nd.

The A-B Division, which is less predictable, saw Whitefish High School eke out a 3-point win over Billings Central Catholic, with the former jumping from 2nd place last season to win their 2nd title in 3 years.

Hellgate, led by senior Katharine Berkoff, a US Junior National Team member and NC State commit, opened the meet with their 8th-straight state title in the girls’ 200 medley relay. Their time of 1:48.80 was 3 seconds shy of their 2017 state record in the event, but Berkoff’s 24.38 leadoff split on the backstroke gave them a 5+ second lead on the field. While Sentinel was able to claw their way back in to the race (including a 29-second breaststroke split from Delaney Carlson), that lead was just too much to overcome.

She went a perfect 4-for-4, including a 23.26 leadoff on Hellgate’s 200 free relay as they rolled to a 1:41.02 win in that race, along with Anya Craig, Avery Maxwell, and Aidan Condit (once again missing their own state record).

Berkoff finishes her high school career having won a maximum 16 event state titles and 4 team state titles. Individually, that includes a slight deviation as a sophomore, where she won the 200 free as her first race rather than the 100 free.

Whitefish High would win only one relay in the meet (the 400 free relay, where they were the only team that advanced to the final), but they took 5 individual event victories to come.

Sophomore Helena Kunz topped off the victories for Whitefish by winning the 200 free in 2:02.89.

Going to make her dad look like a piker.

Congratulations Katharine!! What an accomplishment!