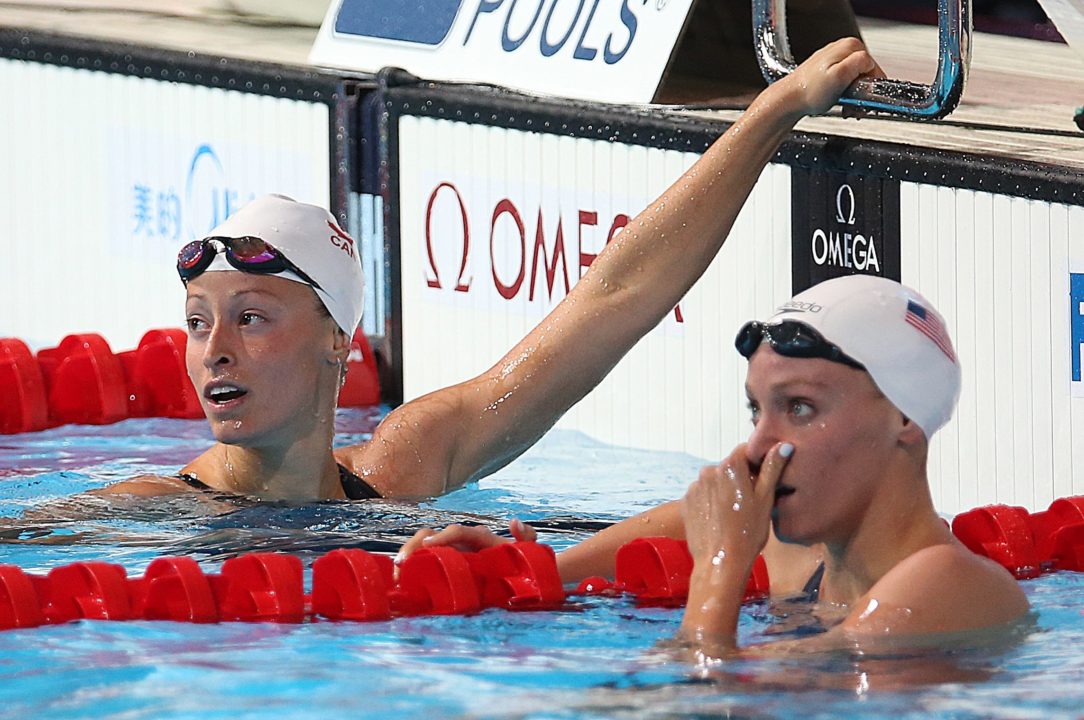 Day three of the Canada Cup kicked off with the prelims of the 100m breaststroke. Canadian breaststroker Martha McCabe threw down... Archive photo via Swimming Canada/Ian MacNicol

The mens 100m breaststroke should have Club Wolverine teammates Richard Funk and Zachary Hayden going at it again just as they did last night in the 50m breaststroke. Hayden took the top seed for tonight’s final this morning however, clocking in at 1:02.82 way ahead of the 1:03.50 Funk posted. Funk is Canada’s man in the breaststroke events, so make sure to look for a battle in the middle of the pool between these two tonight. The final features only one teenager, Eli Wall (19), who qualified seventh in 1:06.81.

The women’s 100m backstroke features some of Canada’s young up-and-coming talent. Alexendra Deloof took the top seed for Club Wolverine in 1:02.42. Behind her was Danielle Hanus from the Newmarket Stingrays in 1:02.98 and Kennedy Goss from the Granite Gators Swim Club in 1:03.19. With some of Canada’s elite missing from this field, it could be anyones race tonight.

On the mens side, last night’s 200m backstroke winner James Wells will have to face Matthew Myers again this time in the 100m backstroke. The two qualified first and second respectively, Wells over two seconds ahead of Myers in 55.53.

Sandrine Mainville, Audrey Lacroix, and Katerine Savard will face off in tonights 50m fly final. The three swimmers are three of the fastest sprint flyers Canada has to offer with the exclusion of Neomie Thomas who isn’t competing here in Montréal. Mainville won the 50m fly back at Canadian trials in April, so she could be the clear favourite. Savard looked fast this morning however, posting a 26.46 to take the top seed, just three one-hundredths shy of the mark she set at Canadian trials to earn her silver behind Mainville.

Club Wolverine swimmers Sean Fletcher and Geoffrey Cheah took the top seeds in the mens 50m fly. Look for them to make this final competitive tonight. Fletcher was the only one this morning to drop under the 25-second mark, posting a 24.73 to take the top seed.

Surprisingly, butterfly star Katerine Savard took the top seed in the women’s 200m freestyle, an event she doesn’t usually swim. Savard posted a 2:01.19 this morning which placed her ahead of last night’s 400m freestyle winner Lindsay Vrooman. The two qualified well ahead of the rest of the field.

Both Abdel-Khalik brothers (Aly and Hassan) will be facing off in the 200m freestyle tonight as they qualified first and third respectively. Aly Abdel-Khalik, the younger of the two, swam a 1:54.68 to be the only swimmer to crack 1:55 this morning. The race should be fairly tight as all 10 qualifiers were within about two seconds of each other.

Club Wolverine’s Marni Oldershaw should be the huge favourite going into the 400m IM finals tonight. The NCAA All-American qualified first in 4:51.21 ahead of her Club Wolverine teammate Marie Georger. Also in the final will be 16-year-old  backstroker Danielle Hanus, and CIS silver medallist in this event: Vanessa Treasure.

Tristan Cote took the top seed in the mens event with a 4:33.88. It should be his event to lose tonight.