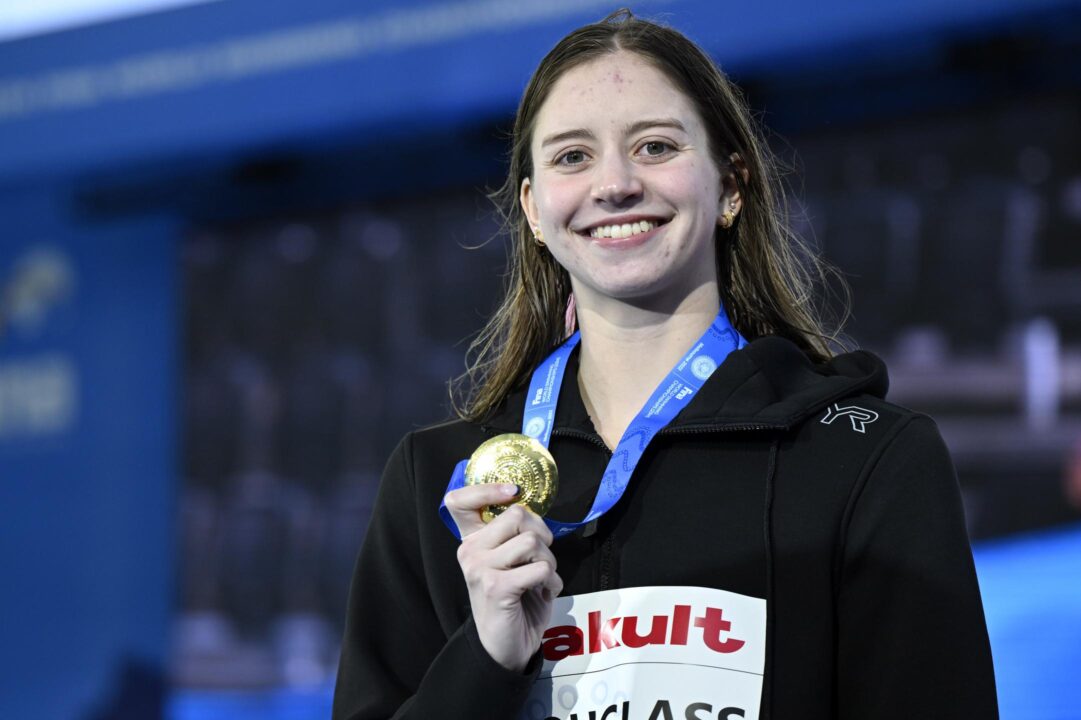 Douglass gave her gold medal to a 13-year-old volunteer worker who had been helping out at the 2022 Short Course World Championships all week. Archive photo via World Aquatics

Following the medal ceremony for the women’s 4×100 medley relay on the last day of the 2022 Short Course World Championships, where the American women won gold in world record fashion, relay anchor Kate Douglass decided to give away her gold medal to an age group swimmer that was volunteering at the meet.

“Honestly these medals are just going to sit in a box in my room, so I figured one of the volunteers would be much more excited about it than me,” Douglass told SwimSwam. “I just felt like I wanted to give them something. They were super excited, and it was really cute.”

The volunteer was 13-year-old Emily Tulloch, who swims for the North-West Aquatic club in Australia and had been helping out all week at short course worlds. North-West Aquatics posted about the medal that Douglass gave Tulloch on their Instagram page, calling it an “incredible souvenir” and saying that they were “forever grateful” for Douglass’ act.

What an incredible souvenir! After a week of helping out at the World Championships, our national swimmer Emily was gifted a Gold Medal from Team USA’s @kaatedouglass. Kate won the gold in the Women’s 4 x 100m Medley Relay, anchoring the team in a World Record time. What an amazing gift. We are forever grateful @kaatedouglass . 🙏

Winning five golds and two silvers, Douglass was the most decorated athlete at short course worlds. She won two individual golds in the 200 IM and 200 breast and three relay golds in the women’s 4×50 free relay, women’s 4×100 medley relay, and mixed 4×50 medley relay, with the latter two relays being world records. In addition, she also earned silver as a part of of the women’s 4×100 free relay and 4×50 medley relay. Douglass won $44,000 U.S. dollars worth of prize money from short course worlds, which is the fifth-highest amount earned by any athlete at this meet.

Douglass isn’t the only athlete to have given away medals from from major international meets. Two other swimmers who have done the same in the past include Anthony Ervin, who sold his 2000 Olympic gold medal for $17,000 and donated the money to tsunami relief efforts; and Ryan Lochte, who auctioned 6 out of his 12 Olympic medals for charity.

When I was a little boy my parents used to take me for a walk near old church. The church was long closed by Soviet Power but you could still find some beggars on its steps. My parents were given me some coins to give them away to those people. I was very proud of what I was doing behaving as an adult. But the point was that I was given them my parent’s money that didn’t belong to me anyway. I remember very well that I wouldn’t give something of value to me. Because I didn’t understand why. How will it make them happy for making me unhappy.
So, whenever I hear about cases like Douglass’ one I’m… Read more »

A very nice gesture from my favorite swimmer 😃😃😃

This medal has no value for her.

braden please just get rid of the replies. at first it was funny seeing these “if i touch grass i’ll go into anaphylactic shock” mfs commenting the most outrageous stuff but now… it’s just sad. really really sad

I’m glad I wasn’t asked to set the over/under for downvotes in this thread. It would have been single digits.

Everyone take a deeeeeep breath.

Kate made a kind gesture that brought a smile to the face and a lifetime memory for the young women pictured above.

Good on you Kate. The swimming world is lucky to have you.

You have a kind heart, a supreme talent, and a Jordan-esque competitive drive. An ultra-rare combination indeed!

You certainly don’t need my support, but you’ve made me a huge fan!

Yeah I know I thought what Kate did was a kind thing. This is a way kids can look up to you and you becoming a role model of sorts. It’s really not that deep.

Hali Flickinger also gave away a medal. It’s on the World Aquatics Instagram.
good on them. Lovely gesture.