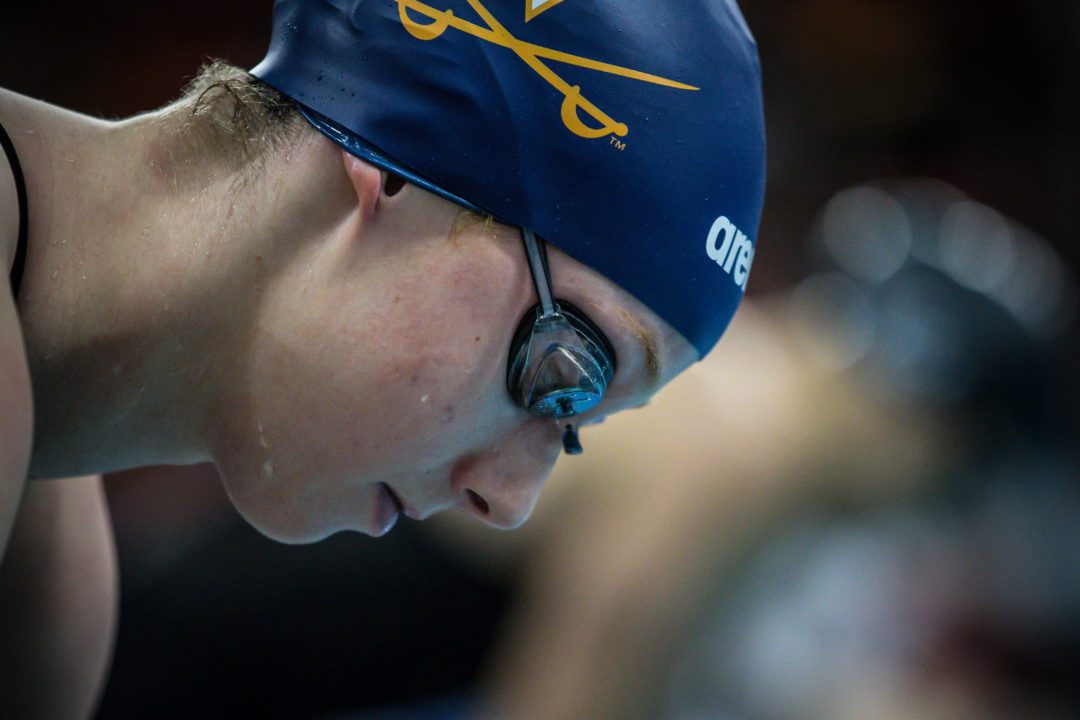 Swim fans got their first look at two of the top ranked recruiting classes in the nation, as the Cavaliers split up for their annual intrasquad meet.

Take intrasquad results for whatever you think they’re worth, but swim fans got their first look at two of the top ranked recruiting classes in the nation, as the UVA Cavaliers split into Orange and Blue teams for their annual intrasquad meet.

The UVA coaches are going to have a fun time putting together Douglass’ NCAA lineup, as she’s a likely a scoring threat in a bevy of events, as today’s results further indicated.

Her events today pretty much correlated with her NCAA lineup last season, where she finished 2nd in the 500 free, 5th in the 200 free, and 10th in the 2100 back.

One of the big holes the Cavalier men will need to fill this year will be butterfly, as they lost both Zach Fong and Bryce Keblish to graduation, but freshman Max Edwards took the first steps toward filling that hole, taking the 50 fly in 22.31.

Jack Walker won the 300 free with a time of 2:33.35. Walker was our #3 recruit in the boys high school class of 2019, and he and fellow freshman Jack Wright (#7 recruit and 2nd behind Walker in the 300 free today) should go a long way toward helping the UVA men build around the sprint free relays.

The Cavalier men had the #3 recruiting class in the nation, and they certainly made their presence known today as a third member of the class, Sean Conway, closed out the individual events with a 49.68 in the 100 IM.

The Virginia women ranked #3 in our initial power rankings, while the men’s ranking should come out early next week. The Cavaliers continue competition next week at the Trojan Invite.

Heard they wore tech suits in this intrasquad meet? Is that common?

No problem, my mistake. Just appears that way on UVA swimdive Instagram.

I see that too… you may be right about the women… but they are all mismatched and probably old suits (not sure how much that matters in these new tech suits today but they were clearly not newly issued team suits). I wonder if they just had a fun bet going with the blue team, since that picture is only the Orange team, or if this is something you will see in every meet now with women’s teams because of the “wedgie” issue. Just wear an old “tech” suit and then dont even think twice about getting a stupid DQ for your suit. Regardless, really fast times and still some very fast times on the men’s side as well.

Looking at the medley relay splits- who swam the 27.5 breaststroke leg in the C relay and the 22.6 butterfly leg on the D relay? The 21.6 in split in the free relay has to be Douglass.

Alexis Wenger on breast for C relay, Douglass was the 22.6 flyer. And you’re correct, Douglass did the 21.6 in the free relay.

That’s gonna be a dangerous relay come championship season if they can stay healthy.

Yea they will be close to the TN women’s time

If the 300 IM is 75 each stroke, Douglass’ Sami was UNBELIEVABLY fast.

That’s a good point and I love the statistical thinking! Going a bit further with it, the breaststroke breaks down to 1.1s per 100 while the 400IM breaks down to 2.3s per 100. Accounting for the fact that the start advantage is a higher percentage of the breaststroke time than the IM (since it’s a shorter race), I think the 9.2 seconds slower metric undervalues how impressive her IM was. I think you’re right that the breaststroke might be a more valuable swim, but they both really surprised me, considering she’s a sprint freestyler swimming these events. Can’t wait to see her progression this season… and I’m wondering what events she’ll end up swimming at NCAAs!