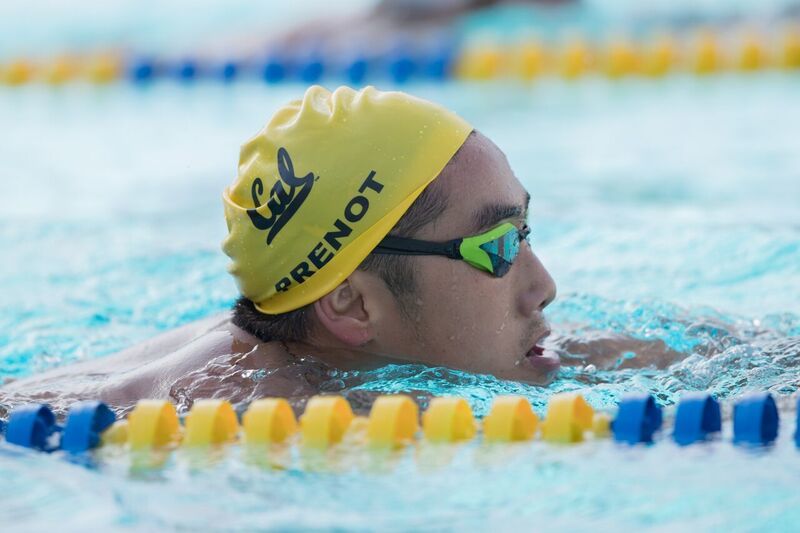 Half of the California men's team headed to Stockton this weekend for a dual meet on Friday. While the rest of the team traveled to Salt Lake City for a meet against Utah, the Bears' contingent in Stockton earned a victory over Pacific. Archive photo via “Rafael/Domeyko Photography”

Half of the California men’s team headed to Stockton this weekend for a dual meet on Friday. While the rest of the team traveled to Salt Lake City for a meet against Utah, the Bears’ contingent in Stockton earned a victory over Pacific.

STOCKTON, Calif. – Wins in 11 individual events got a busy weekend off to a good start for the Cal men’s swimming team as the Bears claimed victory in their first dual meet of the 2017-18 season with a 158.5-100.5 victory at Pacific.

With half the team headed to Salt Lake City for a Saturday dual against Utah, Cal took the other half of the roster to Stockton for some mid-day racing against the Tigers. Junior Ken Takahashi got the Bears started when it came to race wins, posting a time of 9:34.31 to take the 1,000-yard freestyle.

Pacific earned its first individual win of the day in the 50 freestyle but Cal came right back to win the 100 free as Kyle Coan led the field to the wall in 46.40. Song earned his second win of the day with a time of 1:49.12 in the 200 back and Whittle finished the breaststroke double, winning the 200 in 2:04.57.

Kao joined the two-win club with a narrow win over Takahashi in the 500 free and Xie did the same by claiming victory in the 100 fly. Takahashi wrapped up the day with a win in the 200 IM, finishing with a time of 1:54.29. Pacific claimed the final race of the day, winning the 400 free relay.

Cal will be back in action with an entirely new crew on Saturday as the Bears take on Utah at 1 p.m. (PT) in Salt Lake City. Several Cal swimmers return to action on Oct. 21 and 22 when they travel to Los Angeles to compete in the USA College Challenge and the full squad will take the pool again on Nov. 10 when Stanford visits Spieker Aquatics Complex for the annual Triple Distance Meet.

The nationally-ranked Golden Bears finished with a team score of 158.5, while the Tigers collected a score of 100.5.

The 200 Medley Relay and 400 Freestyle Relay teams highlighted the day for the Tigers as they claimed victories in both events. The Tigers 200 Medley Relay “A” team, which includes Makoa Haneberg, Yahav Shahaff, Mason Miller and Stewart Harrison, clocked a time of 1:30.72. Joining Harrison and Miller in the 400 Freestyle Relay were Dylan Toy and Miles MacKenzie. The foursome finished 1.43 seconds ahead of Cal’s “A” squad, clocking a time of 3:03.00.

The men’s swimming and diving team will join the women at Cal State Bakersfield tomorrow for a 1:00 pm meet.