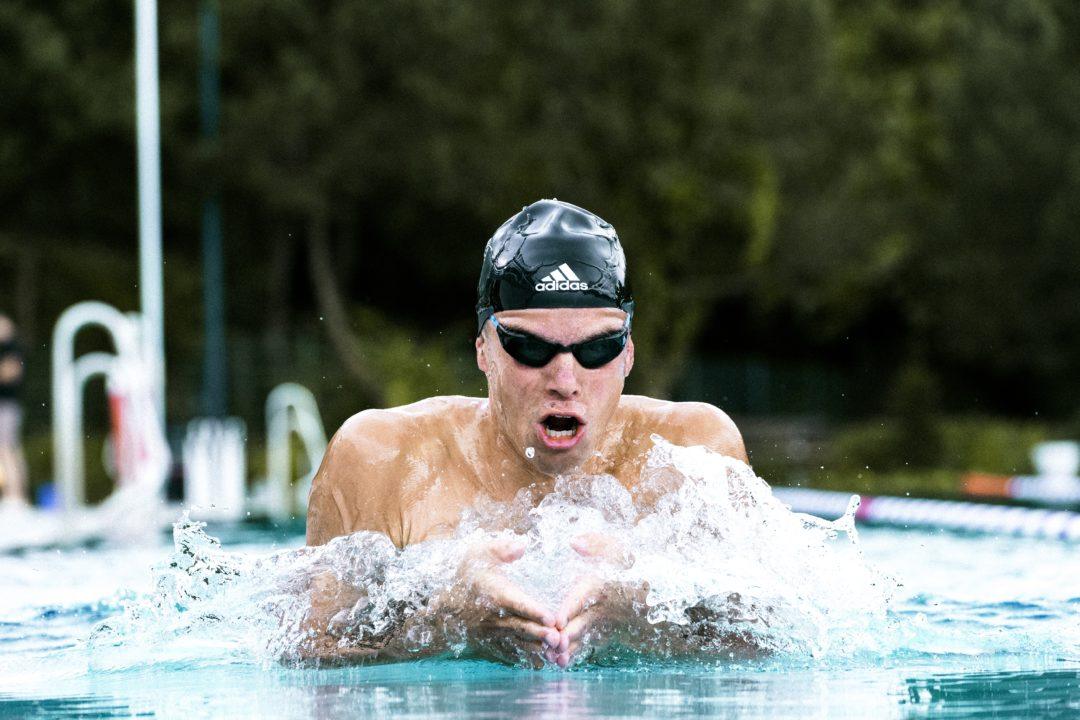 Josh Prenot dishes on his World Trials disappointment, his plans for next year, and what's it like to be a professional swimmer. Current photo via Courtesy of Adidas

There’s no doubt that the 2017 World Championships Trials did not go as expected for Josh Prenot.  The 2016 Rio silver medalist found himself less a tenth of a second from making the US World Champs team in the 200 breast, then again coming tantalizingly close to making the team in the 200 IM and visibly upset when he realized he’d just missed out.

But that wasn’t the end of the summer’s racing for Prenot. We got to chat with Josh recently while he was in Germany gearing up for a few meets in Europe and touring the headquarters of Adidas, his sponsor.  Obviously one of the first questions we had to ask him had to with how he plans to bounce back and refocus after the disappointment he had at this summer’s trials.  He said:

Yeah, obviously I had a pretty rough go of it at that meet.  I’ve kinda always prided myself on my mental game.  You know, I feel like regardless of the conditions I’ve just quietly gone and done the job.  Certainly not the case in Indianapolis, and that was painfully obvious to people watching.

So, it’s getting back on that, just getting kinda dialed in to my routine.  Is going to help.  I typically don’t let stuff get to me and I clearly did in Indianapolis, but as far as how to bounce back I’m out at here Adidas right now, that’s awesome…Adidas HQ is sick.  I’ve never been here before, but yeah, we’ve doing a lot of activities, talking to a lot of people, it’s been a really great time so far.

But I don’t think I’m going to be taking much of a training break since I took such a long one post Rio.  If I could spin the terrible results of Indianapolis positively somehow, I’d say that this is actually a net benefit for my swimming career.  After Olympic Trials last year I’d pretty much achieved everything I ever wanted to do in the sport.  My ultimate goal was just to become an Olympian.  So after Omaha it was pretty easy to reset and say hey, I’m going to go out and get a medal.  And after that happened I just did not attack each and every workout with the hunger and the fire this year like I had for the entire rest of my career.  So, needless to say I got the hunger back now after experiencing a lack of success in Indianapolis.

So, I think the coming months and years will be good.

From there, Prenot went into a little more detail about that post-Rio training break and how he thought it affected his performance in Indianapolis:

I’ve always been…I haven’t been too much of a break guy.  I’ve only really taken one week or maybe two post summer meets.  I didn’t take any break between 2015 and 2016.  So yeah, that obviously affected it.  But more than anything, like I said, for the previous entire quad I was just attacking every single workout with extreme hunger and dedication and after achieving what I set out as my ultimate goal in the sport, I just did not have that last year.  That’s not to say I was being lazy or slacking, but there’s a difference in trying to be good because you want it and be cool and trying to be the best because you have to.

Although Prenot exhausted his NCAA eligibility in the spring of 2016, he, like many other swimmers, spread out his undergraduate courses over five years, especially as training for Rio limited academic pursuits.  Still, he turned pro after the 2016 season and went on to sign with Adidas.  So, we asked Josh how different it was living and training as a professional swimmer versus one who was still an amateur, according to NCAA classification.

I’ve been asked this question countless times, and my response is always there’s really not much of a difference.  The biggest difference is that the pro group at Cal starts lifting weights about 20 minutes than the college group so we’re not all trying to use the same equipment at the same time.

There’s really not much of a difference except I now get to keep the money that I earn.  So overall it’s pretty sweet.

Despite now being a professional and done with college, Prenot doesn’t expect too much to change in terms of the meet schedule.

I think it’s going to be a pretty typical year: train, race, prep for nationals.  I think in the spring or early summer we will probably head out to the Mare Nostrum series; did that back in 2014 and that  was an awesome experience.  Getting all that racing in helped us perform well at 2014 Nationals.  So, I hope that we do that again; I think we will.  But other than that no real shocking plans to report — train hard and race hard.

Finally, we asked Josh about his experience with Adidas, particularly at the Adidas headquarters.  The German company seems to be making headway into the competitive swimming market, both with its Adizero tech suit line and its sponsoring of swimmers ranging from Prenot to American age group star Michael Andrew to Australians Madison Wilson and Kyle Chalmers.

Talking about the difference between being a pro athlete and a college athlete this is one of them.  Getting to see a really cool brand like this, getting to be part of the team.  Everything we’ve done so far from talking to the production and innovation team to speaking with the designers to seeing the whole process that goes on here and meeting some other Adidas athletes for the first time — is really amazing to be a part of.  Very thankful to be a part of this squad, and everything the brand is doing, from the sustainability stuff to the innovation pushing toward 2020 had been really cool to see this week.

Adidas is a SwimSwam partner.

Impressive to have the humility to say you just didn’t put in the work necessary to be at your best like you had before.

I will be rooting for Josh to get back to his best this year.

Agreed, I hope Josh can bounce back and take the 200 BR WR down

It also looks good at him that he acknowledged that he wasn’t as mentally unflappable at Trials as usual. I think a lot of people would purposely not mention that.

Also notable he’s the only college physics major to win an Olympic swimming medal in Rio.

you know that for a fact?

Yes he also was physics major and they are friends

Pretty sure this was meant to be shade towards McEvoy and his Rio chokejob. Should be INDIVIDUAL swimming medal, since we know that McEvoy got a pair of relay medals.

What happened to video interviews?