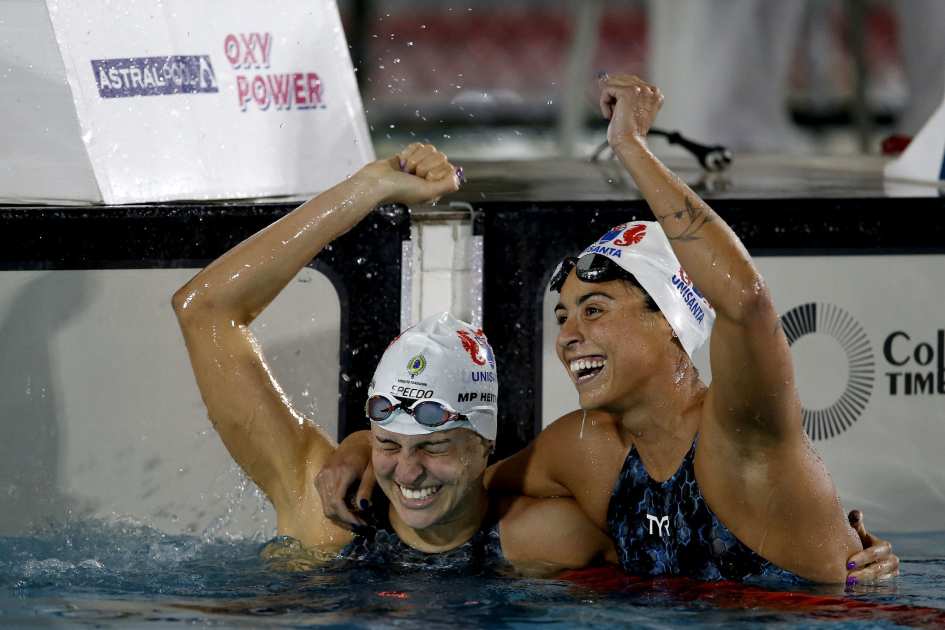 With those performances, Heitmann, Almeida, and Roncatto are now the #1, #2, and #4 performers all-time in Brazilian and South American history. Current photo via Satiro Sodré/CBDA

The 2022 Jose Finkel Trophy kicked off tonight in Recife, Brazil, featuring the best and brightest of Brazilian swimming. Additionally, this meet serves as the selection meet for the Brazil’s 2022 SC World Championships team.

The first night of the meet saw some incredible racing, including a South American Record, as well as a few meet records. It was Maria Heitmann who cracked a continental record, swimming a 4:03.45 to win the women’s 400 free. That time was a huge personal best for Heitmann, also chipping the previous South American Record of 4:03.68, which was held by Viviane Jungblut.

Coincidentally, Nathalia Almeida, Heitmann’s teammate, came in 2nd tonight, also coming in under the previous South American Record.  Almeida swam a 4:03.49, establishing a small early lead over Heitmann, then swimming right next to her the rest of the way. It’s worth noting that Gabrielle Roncatto came in 3rd, right behind Heitmann and Almeida with a 4:03.77.

With those performances, Heitmann, Almeida, and Roncatto are now the #1, #2, and #4 performers all-time in Brazilian and South American history. Additionally, that trio all train under the same coach, Fernando Possenti, although Roncatto represents Flamengo, while Heitmann and Almeida represent Unisanta. Brazil isn’t typically seen as a strong nation in women’s distance events, but tonight’s performances in the 400 free are certainly a great step in a new direction for Brazilian women’s swimming.

The next event, the men’s 400 free, saw Fernando Scheffer win in a new meet record of 3:39.46. Scheffer, who made waves last summer by earning bronze in the 200 free at the Tokyo 2020 Olympics, pulled away from a stacked field tonight, ultimately finishing 2.5 seconds ahead of runner-up Guilherme Costa (3:42.02). Scheffer downed the Jose Finkel meet record, but touched just off his own personal best of 3:39.10, which stands as the Brazilian Record, and the South American Record, which is held by Venzuela’s Alfonso Mestre at 3:39.06.

The meet started out 3-for-3 on meet records, as the next event, the women’s 100 fly, also saw the fastest performance in Jose Finkel Trophy history. Giovanna Diamante was dominant tonight, swimming a 56.79 to touch first by nearly a second. She came close to the Brazilian Record, which stands at 56.31 from Daiene Dias.

Pinheiros posted a 1-2 finish in the men’s 100 breast, with Caio Pumputis swimming a 57.52 to touch first. Joao Gomes was 2nd, finishing right behind Pumputis in 57.89. The pair was right next to each other the whole race, never separating by more than 0.17 seconds until the final 25m, when Pumuputis began to pull away just a bit.

Gabriel Fantoni won the men’s 100 fly in 50.33, beating out Vini Lanza (50.61). Notably, Fantoni and Lanza were at one point teammates at Indiana University in the United States.