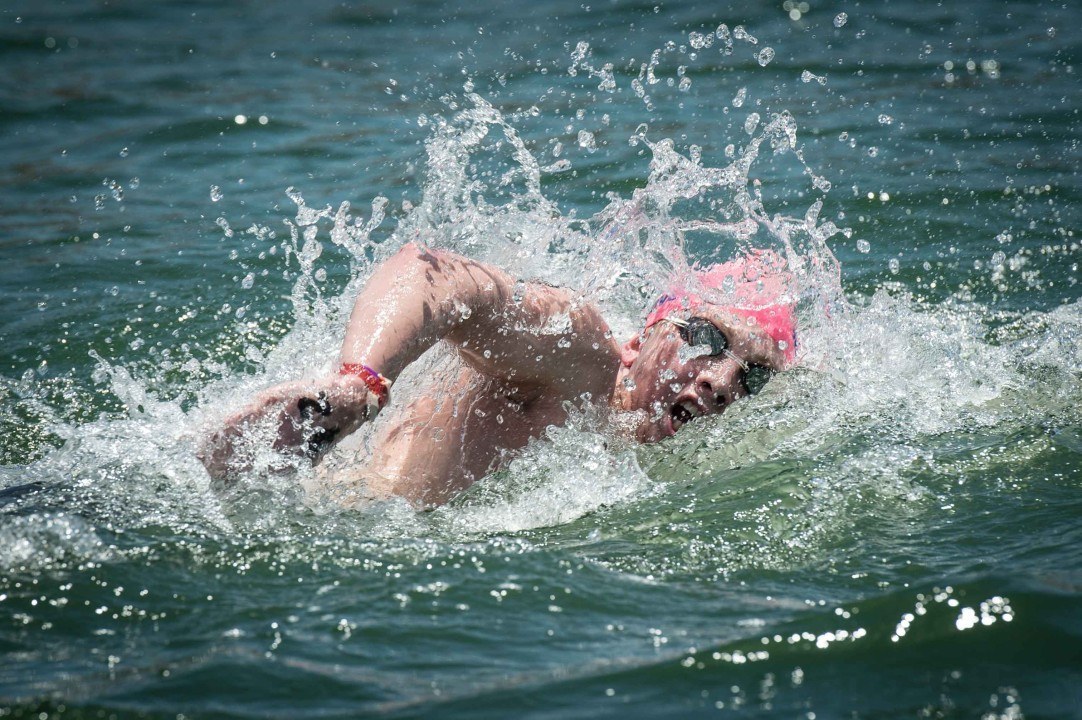 The Open Water National Championships are taking place this weekend in Miromar Lakes, FL off the campus of Florida Gulf Coast University. The weather for the event is just about perfect. During the women’s race, the air temperature was around 75 degrees and overcast, with a little humidity. There was no wind, no sun, and the water temperature was 80-81 degree. It heated up a little during the men’s race, but it was still very manageable.

Jordan Wilimovsky got his hand on the pad first to win for the second year in a row, defending his national title with his time of 1:54.27. He will earn another trip to the FINA World Championships. The second swimmer going to Kazaan as a member of the open water team is Sean Ryan. He touched out Olympian Alex Meyer by .006 of a second! David Heron officially reached in for fourth.

Full results from the men’s 10K by clicking here.

I heard lots of families are unattaching from GAAC.

Arthur Fraylor chooses to swim unattached rather than GAAC. I guess that’s a nod to the mistreatment of Dick Shoulberg by the GA administration and the new GAAC swim staff headed by Jeff Thompson.

Arthur Fraylor drops GAAC and swims unattached. I guess that’s a nod to the mistreatment of Dick Shoulberg by the GA administration and the new swim staff headed by Jeff Thompson.

Coach GB, I think it was the 1976 games where the tie occurred. The official reason I heard for the change was that in 1976 there was only on starter speaker and a gun start was used. The distance sound took to travel to the 8th lane was more than 0.0001 seconds and so the use of times in.pools with a single speaker or gun start was unfair to.competitors furthest away. I have also heard that Omega timing is not as accurate as advertised and that accuracy to the 1000th is very doubtful because of the type of pad system they have designed. Colorado or daktronics uses a different pad system and may be more accurate but Omega has their… Read more »

does alex myer qualify for worlds since he finnished third? How many swimmers qualified for the 10000 meters for worlds out of yesterdays results?

There is an article entitled, “US Open Water Trials Begin Friday: Three Major International Teams to be Decided with Olympic Ramifications” that was posted the day before yesterday which explains the qualification process for Kazan, etc. It’s a little complicated, or I’d answer your question right now, but succinctly put, maybe in the 25K or 5K but not in the 10 K, it depends on the choices that #1 and #2 make.

DANJOHNROB – they take video of the finish pad. I’m guessing, but I’m not positive, that it’s a high speed video, probably similar to systems used for track or cycling. The finish is recorded and reviewed if necessary. The chatter on Twitter was that second was a photo finish, I don’t know how long it took them to review the tape.

Thank you! I still don’t understand why an Olympic pool swimming race can’t be decided to 0.001. I’m going to guess that it’s because too many underwater cameras would be necessary or something to that effect.

It goes back to the 1972 Munich Games in the 400 IM. Google the results and it shows
Gunnar Larsen of Sweden Gold and Tim Mckee USA Silver and both with a time of 4:31.98 but not a tie. Up to that time races were decided up to the thousandth of a second. Starting with Kyroscope and then Omega systems in the beginning. The race was decided to the thousandth what it was is probably somewhere.. Some time after that not sure who started the discussions whether here in US or FINA where it did end up it was felt that a pool wall couldn’t be constructed or poured to the tolarence of a thousandth of a second from… Read more »

CoachGB, Thanks for your time and pointing me in the right direction! I now understand why pool races are decided to 0.01. I’m still a little fuzzy on why they think they can decide the winner of THIS race to 0.001, but from the responses of Barbotus, Tim and Seasprite I understand slow-motion video was used. Have a good night!

Thank you! I sincerely appreciate your response.