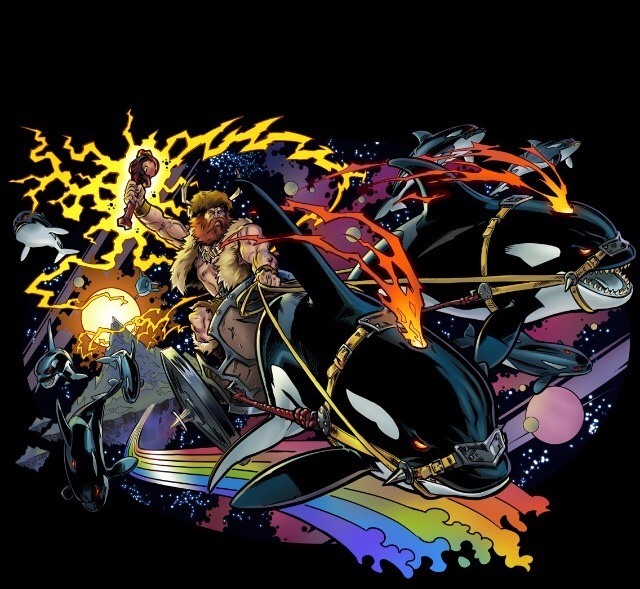 Yes, that is a Viking, leading a pod of killer whales over the bifrost from Asgard to a new era of cosmic awesomeness. Current photo via Sam Wood

Retaining their overall pick ’ems lead after day four was McG_H2O, now 6 points ahead of Nathank and retiredswimmer97.

JCKW has been under the same leadership since it’s creation in the fall of 1999, and their founder and director, The Screaming Viking, has always hated the name.

“I liked Killer Whales, and the black/white/royal blue color combo was sharp, but even though we are based in Jasper County, Missouri our team name never made sense… the first three swim families who signed up with us were all from other counties.  Now we draw athletes from a one hour radius in Missouri, Oklahoma and Kansas.  To make it even more confusing, we are part of the Arkansas LSC.  We represent what is called the 4-states area that surrounds Joplin and now that we are starting to be represented at the national level we needed a name that was more far-reaching and recognizable.”

Even worse, he says “I have also been really tired of being mistakenly called Jackson County for the last 16 years.”

The Viking, who is head coach of the club based out of Webb City High School and Schifferdecker Aquatic Park in Joplin, admits that he decided on the original name in a rush.  “I had to get the paperwork filled out fast so we could have insurance to start practicing and ended up with the first name that came to mind.  Never liked it, although I will miss the Killer Whale emblem enough that you may see it come up in some of our team gear designs.  Some of the kids on the team grew up here as Killer Whales so we may never completely let go of that part of our history.”

So what is a Berzerker?  The Viking has had the name in the back of his mind for a long time.  In a way it honors the two teams he credits with developing his love of swimming: Viking Swim Club in Petersburg, Alaska and the Missouri State Bears in Springfield.  “Basically, a Berserker was the highest of the Viking warriors. They were known for wearing Bear skin and battling with such fervor that even allies would have to steer clear. It is as much about having an excuse to wear a hat with horns as it is about training yourself to be in a racing mindset when needed.  Plus, it is just cool to be able to tell your athletes to GO BERZERK.”

“Odin’s men would perform ritualistic chants and dances, believing themselves possessed by the spirit of the bear, wolf or other animal whose skins they wore. They went without their armor and stormed to battle with no regard for their own safety. They growled and bit their shields, and neither fire nor iron could harm them. This trance-like fury, which was called berserkergang or going berzerk, occurred not only in the heat of battle, but also during laborious work. Men who were thus seized would shiver, chill and chatter their teeth, and were unstoppable, performing feats which otherwise seemed impossible for human power or without the favor of the Gods.”

Berserker just rolls right off the tongue haha. And ditch the muzzled killer whales unless u want seaworld to sponsor the team