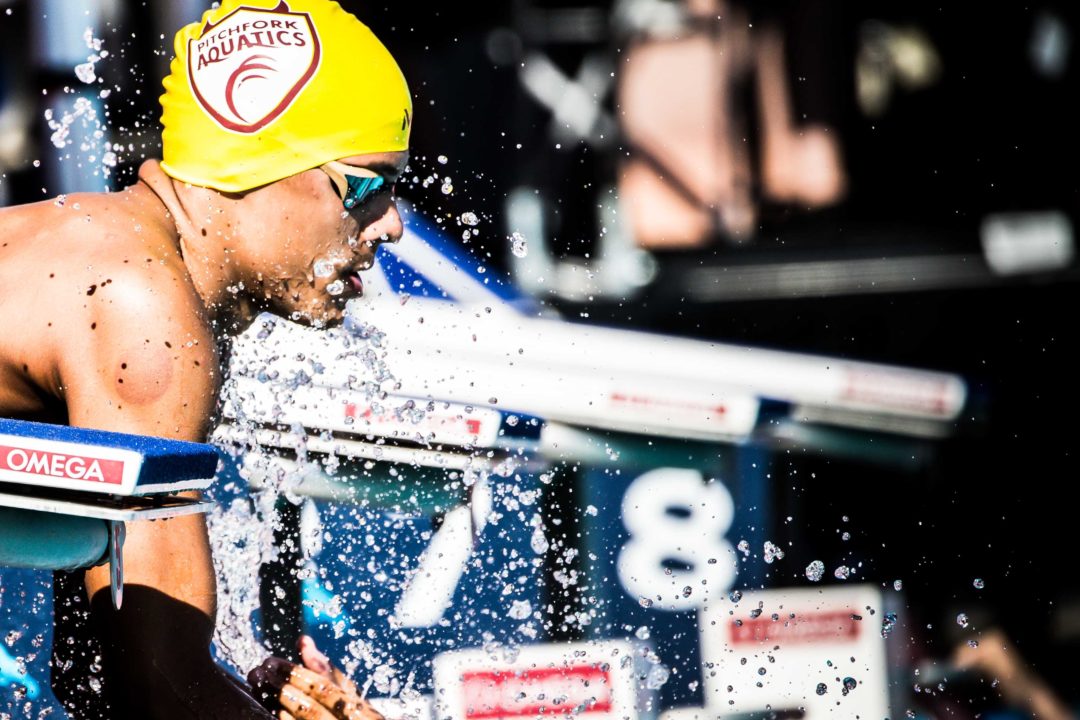 Jarod Arroyo was one of multiple swimmers to set National Records for their respective countries at the Puerto Rico International Open. Archive photo via Jack Spitser/Spitser Photography

Multiple countries saw their national records fall during the 2021 edition of the Puerto Rico International Open, with several swimmers moving up their ranks prior to the Tokyo Olympic Games.

Yeziel Morales kicked-off the weekend by winning the men’s 50 meter backstroke in a time of 25.76. His time marks a new Puerto Rican national record in the event, adding to the records that he already holds in both the 100 and 200 backstroke events from the South American Championships back in March. 21-year-old Erick Gordillo also broke a national standard in the event, finishing second to Morales in a time of 26.66. With his performance, Gordillo set a new Guatemalan national record in the event.

Later in the competition, Gordillo set his second Guatemalan national record of the weekend, swimming a time of 4:20.31 in the 400 IM. After swimming a time of 4:35.77 in prelims, Gordillo exploded in the final to post a personal best by almost 2 seconds in finals, erasing his previous mark of 4:22.07. In the final, Gordillo was only beaten by 19-year-old Jarod Arroyo, who won the event in a time of 4:16.63. For Arroyo, his performance set a new Puerto Rican national record, smashing his best time by over 5 seconds in the process. The previous record stood at 4:16.67. Both Arroyo and Gordillo managed to get under the FINA “B-cut” of 4:21.46 with their times, giving themselves Olympic Selection Times for Tokyo.

18-year-old Munzer Kabbara placed 3rd in the 400 IM final after swimming to a Lebanese national record in prelims. During prelims, Kabbara put up a time of 4:26.96 to slice a half second off of his best time and set the new standard. Although he couldn’t quite match that during finals, he still put up a time effort of 4:27.13, still coming under the old record. Kabbara lives and trains in the United States, swimming with the Cypress Fairbanks Swim Club in Huston, Texas.

The aforementioned Arroyo also set a Puerto Rican national record in the 200 IM, taking down the standard in a time trial. In the individual event, Arroyo finished first overall in a time of 2:01.26, coming within a half second of the national record of 2:00.91, while also chopping over a second off of his best time. In a successful attempt to break the record, Arroyo entered a time trial, swimming a time of 2:00.85 to slice another half second off of his personal best, sliding under the record in the process. Arroyo’s final time slid under the FINA “B-cut” of 2:03.26, giving him another prospective qualifying spot for Tokyo.

Should Puerto Rico become a state (it should not) the inhabitants will not be permitted to have their own Olympic team, nor their own Miss Universe contestant. They would need to compete with all other state athletes and contestants. There’s too much to lose and little to gain becoming a state.
Be careful what you wish for. Puerto Rico Libre!

No problem with PR having their own Olympic team, but I don’t understand quite why/how. Legally PR is part of USA. Does anyone know how this works?

Basically, in 1948, after WW2, Puerto Rico asked the IOC if it could send a team. The U.S. didn’t necessarily like it at the time, but didn’t try too hard to stamp it out. At the time, the IOC needed to give the Olympics a boost after the war, and were taking whoever would come.

Previously, the IOC was willing to recognize certain areas that had some level of self-governance, even if they were not a truly-sovereign nation, to have Olympic Committees. Hong Kong and the USVI

You’re right that Aruba is part of that group. And as I’m sure is the case with all the countries mentioned, there is a little bit of interesting history that goes with Aruba’s NOC: