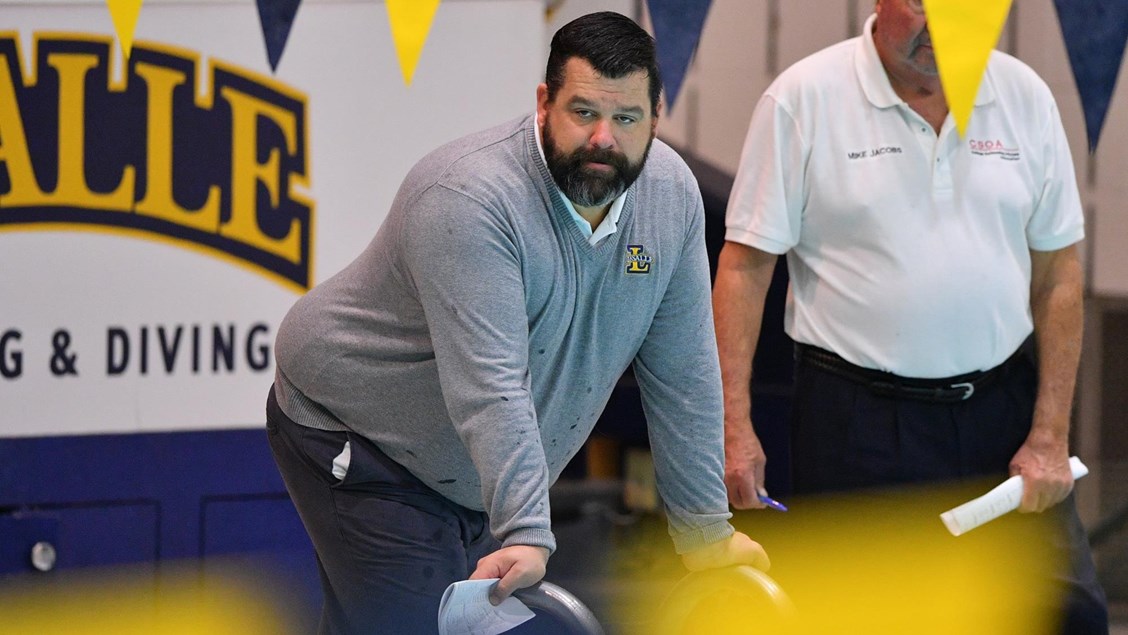 Jamie Platt has spent 18 years coaching at La Salle University in Philadelphia, including the last 5 as the program's head coach. Archive photo via La Salle Athletics

Current assistant Sasha Malanina will serve as the interim head coach while the school looks for a permanent replacement for Platt.

With over 11,000 athletes spread across 134 member clubs in Eastern Pennsylvania, Southern New Jersey, and Delaware, Middle Atlantic Swimming is the 6th-largest of USA Swimming’s 59 Local Swimming Committees (LSCs). These LSCs function as regional administrative bodies for the sport around the country.

Platt has served as the General Chair of the LSC’s Board of Directors, but will now transition to a full-time, paid position.

In Platt’s final season as head coach of La Salle, the women finished 9th out of 11 teams at the Atlantic 10 Championships and the men finished 4th out of 8 teams.

The program’s best finish during Platt’s tenure as head coach came at the end of the 2016-2017 season, where the La Salle men finished 2nd at the A-10 Championships, just 34.5 points behind George Washington. The men’s team was in the top half of the conference in all but one season of Platt’s leadership.

The women’s team’s best finish was 7th place at the 2019 championships.

“We are excited about this new opportunity for Jamie with Middle Atlantic Swimming,” Director of Athletics and Recreation Brian Baptiste said. “Jamie spent nearly two decades positively impacting the lives of student-athletes at La Salle University. We want to thank him for his service, and wish him nothing but the best in his future endeavors.”

He recruited international student-athletes from 12 countries, mentored three A-10 Rookies of the Year and two US Olympic Trials qualifiers (Blase Szyszko ’13 competed in the 100 & 200 Breaststroke events in 2012, and Mattias Glenesk ’17 competed in the 1500 freestyle in 2016).

“La Salle Swimming & Diving has been a part of my life since my brother Bill joined the program in 1991. I was in awe of a team that cared for each other, supported each other and made each other better people and athletes,” Platt said. “Leaving this program – that still has that same caring culture – was not an easy decision, but the opportunity that Middle Atlantic Swimming presented was one I felt I couldn’t pass up. La Salle will always hold a special place in my heart, and I can’t wait to see what the future holds for both programs – just from the stands now, not the pool deck. I know the best is yet to come.”

Congrats Jamie.over the years we have sent 9 swimmers to LaSalle and everyone of them got a great education and great swimming experience because of Jamie and the other coaches. Middle Atlantic Swimming now has a great guy who genuinely cares about the kids

Congratulations Jamie and Middle Atlantic! Great things to come for youth swimming in that area!

Depends on what he does after he exits. Not sure there’s a high demand of swim coaches at the moment?

Did you read the article? He already has a job, that’s why he resigned….