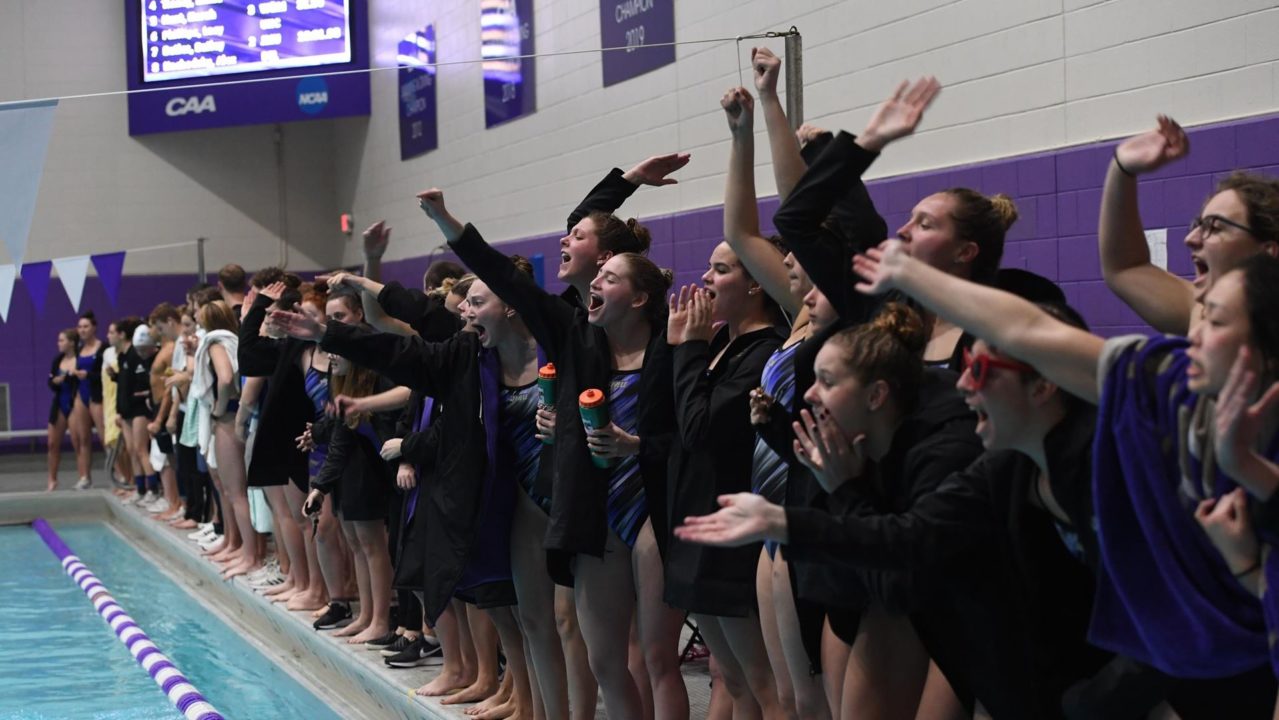 A tight meet between three-time defending champions James Madison and an upstart William & Mary continued tonight. JMU had a huge morning push, getting 12 swims into A-finals tonight to W&M’s nine, but the opening relay saw the Tribe win while JMU and Drexel were both disqualified.

W&M went big in the final two individual events of the night, as Annie Tuttle took the 100 breast (1:01.70). In the 100 back, Anna Kenna dropped over a second to win in 54.77, picking up points against her seed as JMU had held the top three spots after prelims. Cottrell, swimming a double after the 100 fly, was able to hold on for second for JMU (54.99).

Despite the Tribe’s push, and the DQ, James Madison held a lead of just over 100 points going into the 800 free relay thanks to their impressive depth.

After further review, though, another twist: JMU’s relay DQ was rescinded, and their 7:23.87 was good for second place.

James Madison’s lead is now over 100 with the reinstated relay, with one day left of the meet. Meanwhile, Towson and Delaware sit neck-and-neck for third, not too far behind W&M.

Their lead is due to 175 points from diving, not their swimming depth. Quite an advantage when William and Mary doesn’t have a diving team.

They don’t having diving at their facility. It isn’t like they chose not to bring divers. They don’t have that option based on their pool.

Not JMU’s fault. 2 Relays DQ’s and their still up! You gonna blame the last 3 championships on that too?

Not the same conference, but Nebraksa doesn’t have a platform: yet they had a diver compete at the NCAAs, there are always options.

that “advantage” is compensated for by requiring any team with divers to bring LESS swimmers to the meet. w&m therefore had MORE swimmers in the meet than any other team.

w&m had 3 more swimmers than jmu.

Could you enter swimmers in diving events, even if they don’t know what they’re doing to capture points?

You can enter them, but if a diver fails two dives, they’re disqualified and score zero points.

So they’d have to be able to compete at some fundamental level the minimum number of dives to score points. They don’t have to be good, they just can’t be “failed dives,” which has a specific set of definitions.

That’s right, and fairly easy to get 6 dives for the 1M. My son did that for his HS team. It requires a bit more to get the full 10 dives, but still very doable with some practice.
Forget about it for 3M and 10M, you have to be a real diver for those.