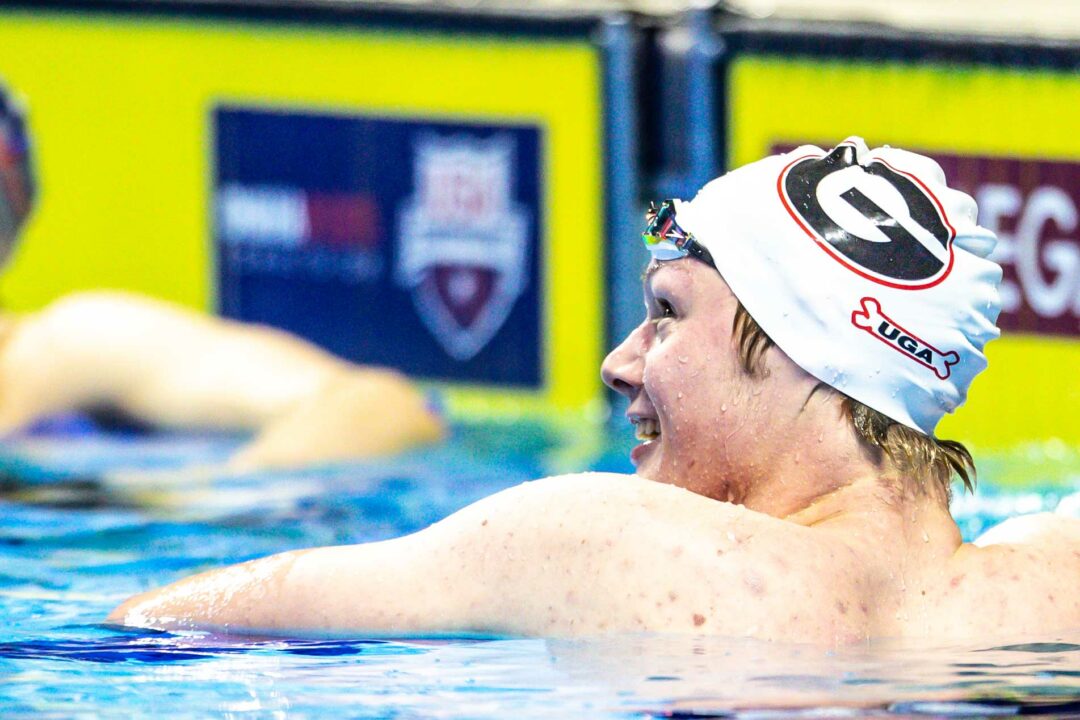 Georgia's Jake Magahey, a sophomore from Dacula, Ga., finished his dual season with a win in the 1,650 freestyle (14:49.98) against Emory. Archive photo via Jack Spitser/Spitser Photography

Men’s Swimmer of the Week: Jake Magahey, Georgia
Georgia’s Jake Magahey, a sophomore from Dacula, Ga., finished his dual season with a win in the 1,650 freestyle against Emory. In his first mile of the season, Magahey posted a first-place time of 14:49.98, earning a B-cut and besting teammate Tommy-Lee Camblong by nearly 12 seconds. His time in the 1,650 free is the 10th-fastest in the country this season. Magahey closed out the day with a 20.06 anchor split in the 200 freestyle relay.

Men’s Diver of the Week: Danny Zhang, Kentucky
Kentucky’s Danny Zhang, a senior from Cypress, Calif., swept the springboard events in the win over Cincinnati. Zhang recorded his third sweep of both boards this season with a score of 384.98 on the 1-meter and 419.18 on the 3-meter.

Men’s Co-Freshman of the Week: Matthew Sates, Georgia and Nick Caruso, Kentucky
Georgia’s Matthew Sates, a freshman from Pietermaritzburg, South Africa, finished first in the 200 freestyle vs. Emory with a B-cut time of 1:33.89, besting the field by two seconds. Sates’ time currently ranks 26th nationally and moved him into seventh all-time in program history in the event. He also participated as an exhibition swimmer in the 500 freestyle and 200 IM.

Women’s Diver of the Week: Brooke Schultz, South Carolina
South Carolina’s Brooke Schultz, a graduate student from Fayetteville, Ark., swept both springboard events against No. 18 Missouri. Schultz recorded final scores of 310.05 on the 1-meter and 378.15 on the 3-meter.

Women’s Freshman of the Week: Elsa Fretz, Georgia
Georgia’s Elsa Fretz, a freshman from Bristol, Ind., helped Georgia to a win over Emory in its dual season finale, taking first in a pair of freestyle events. In the 200 freestyle, Fretz earned her first collegiate victory with a season-best time of 1:47.88, followed later by a winning time of 50.74 in the 100 freestyle. She finished her career day with a split of 23.19 in the 200 freestyle relay.