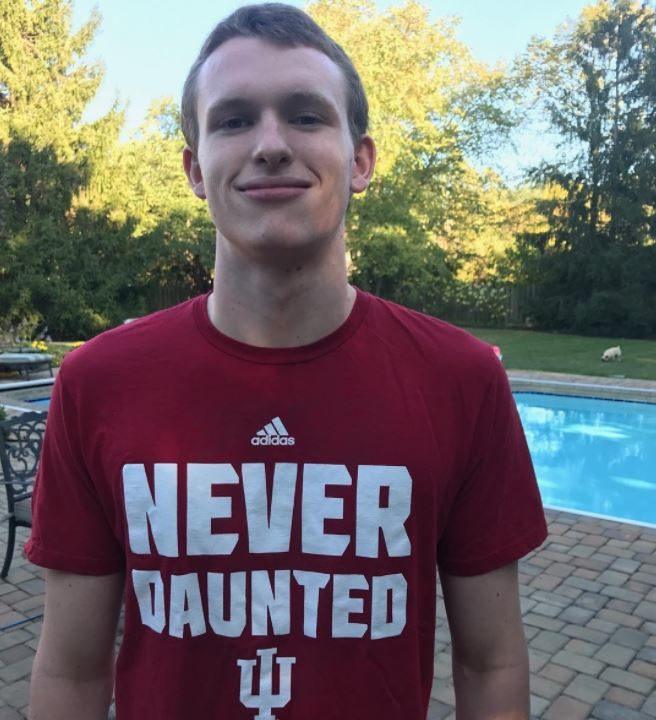 Four months after Jack Franzman became NC State’s first verbal commitment from the high school class of 2018, the Zionsville, Indiana native has decommitted and given a new verbal commitment to the in-state Hoosiers. He announced via Instagram:

“After being given the opportunity to reevaluate my initial college verbal commitment, I am honored and excited to announce that I have recently verbally committed to continue my academic and swimming career at Indiana University beginning in the fall of 2018. GO HOOSIERS!!”

Franzman is a senior at Zionsville Community High School, with whom he has already won three individual and two relay state titles. After claiming twin individual titles in the 50/100 free events as a sophomore, he won the 50 free (20.00, after having broken the state record with 19.85 in prelims) and was runner-up in the 100 free at the 2017 IHSAA Boys Swimming/Diving Championships. He also anchored the Eagles’ state record-breaking 200 medley relay (19.79) and second-place 400 free relay (44.81).

Franzman does his year-round swimming Zionsville Swim Club. He represented Team USA at the 2016 Pan Pacific Junior Championships, earning silver in the 50 free (with a PB of 22.68). At 2016 Winter Juniors he placed second in the 50 free and third in the 100 free. Franzman wrapped up this past long-course season at 2017 NCSA Summer Swimming Championships where he broke the meet record winning the 50 free (twice, with 22.98 in both prelims and finals), placed third in the 50 fly (24.95), and took fourth in the 100 free (50.81), earning new lifetime-bests in the 100 free and 50/100 fly. His best SCY times include:

Franzman adds his name to the list of verbal commits to the Indiana University class of 2022 that already includes Michael Brinegar, Mikey Calvillo, and Zach Cook.

I wish people would realize swimming is a BEAUTIFUL sport an way you look at it . But, there is more to life than just 4 years of college swimming! anDmaybe a few years of post grad if you can land some sponsors. My point is who cares, if its meant for you to improve at a certain program or not oh well LIFE GOES ON 🙂

Some people don’t like being champions…. and that is ok!

College coaches don’t always give kids time to “think it over, go on your trips”. They say we are offering X% but if you don’t commit by X date we can’t promise that anymore.

Not everyone can run with the Pack. Good that he figured it out now! And Todd is a great coach and will do great things at UVA. But Braden is the heart of the Pack. And Bobby will continue the great sprint tradition Todd started.

Exactly! This class of 2018 has been breaking records for the large number of early commits, and I predict will also break records for highest number of re-commits. Take your time recruits! Do your homework. Go on official visits!

One early commit has decided to go elsewhere. I would not say that is record pace for re-commits.

Poor choice. Hopefully he doesn’t regret this decision too much for the rest of his life. There are very few programs out there can can compare to elite combination of academic and athletics at NC State

But IU would certaintly be one of them.

“for the rest of his life” — seriously?

Poor choice? IU is loaded with talent as exemplified by the World performances this summer. They also have the best sprint coach in the US. Also, its a much better school academically than NC State in terms of rankings and reputation.

let’s not get carried away…’the best sprint coach’???? in your opinion or one of the best…..how many world records do his swimmers have? how many american records? one swimmer made the USA Olympic team and now he is the best sprint coach ever? nothing against Coley, Cory, whatever…..no coach is the best at anything in our sport

He had 2 swimmers in the finals of the 100 free at the Olympic games in Rio (male/female) and coached the current American record 50 yard free.

He also coached Schoeman to a wolrd record in 50 free Scm. His HS swimmers NAG records and job he has done with Kendall make him the best in the US.

“much better … than NC State in terms of rankings.”