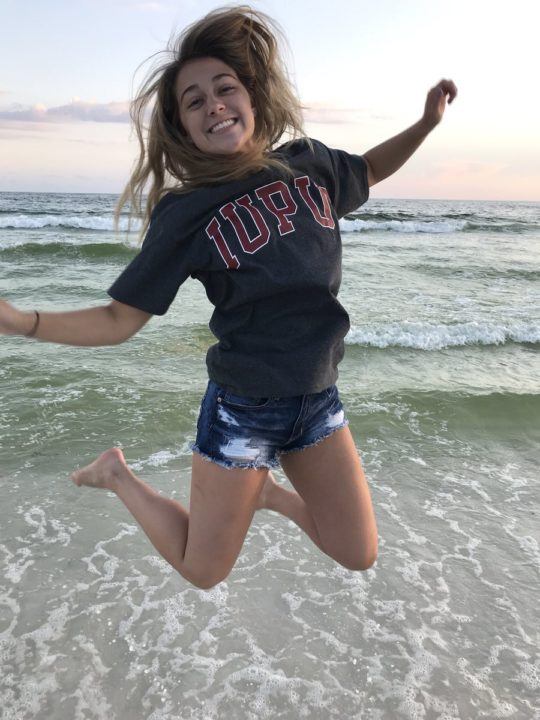 The IUPUI Jaguars have received two commitments from current high school seniors Lauren Thompson and Jackie Bolanger. The two will head to Indianapolis in the Fall of 2019. Current photo via Lauren Thompson

IUPUI has secured two new in-state additions to their incoming freshman class: Lauren Thompson, a Greenville, IN native; and Jackie Bontrager, who comes from Valparaiso, IN. The two will suit up for the Jaguars with fellow commit Cassia Snyder.

Lauren Thompson is a current senior at Floyd Central High School. At last year’s IHSAA State Championship, she finished 12th in the 100 back and 25th in the 100 fly.

Although she attends high school in Indiana, Thompson represents Lakeside Swim Team during the club season, which is based in Kentucky. At the 2018 Kentucky 13 & Over Long Course State Championships, she won the 200 back and was runner-up in the 100 back, earning a best time in the former.

Jumping for joy to announce my verbal commitment to Swim and study at IUPUI!! Go jags! #jagsROAR pic.twitter.com/4n1xoq8tkG

Freestyle specialist Jackie Bontrager, a senior at Valparaiso High School, has also committed to swim for the IUPUI Jaguars.

Swimming exclusively in yards since she started high school, Bontrager made her first high school state appearance swimming on Valparaiso’s 400 free relay as a freshman. Across the course of the next two high school seasons, she qualified for the finals of the 200 free at the IHSAA Championships twice, finishing 16th her sophomore year and 12th during her junior year.

Congratulations to our senior Jackie Bontrager for her verbal commitment to swim at IUPUI next year! We are so proud of you!! 💚💚💚 pic.twitter.com/Covxit5G9o

Last season, the IUPUI women finished fifth at the Horizon League Conference Championships. Thompson’s 100/200 backstroke times would have both qualified for the B-Final, with her 100 time being right on the cusp of a top eight finish. Bontrager’s 200 free time would have also placed her in the B-Final – her lack of year-round swimming could also suggest a lot of potential improvement come her arrival to Indianapolis.