‘It’s Good For the League’: Kevin Tyrrell on Harvard’s Rise 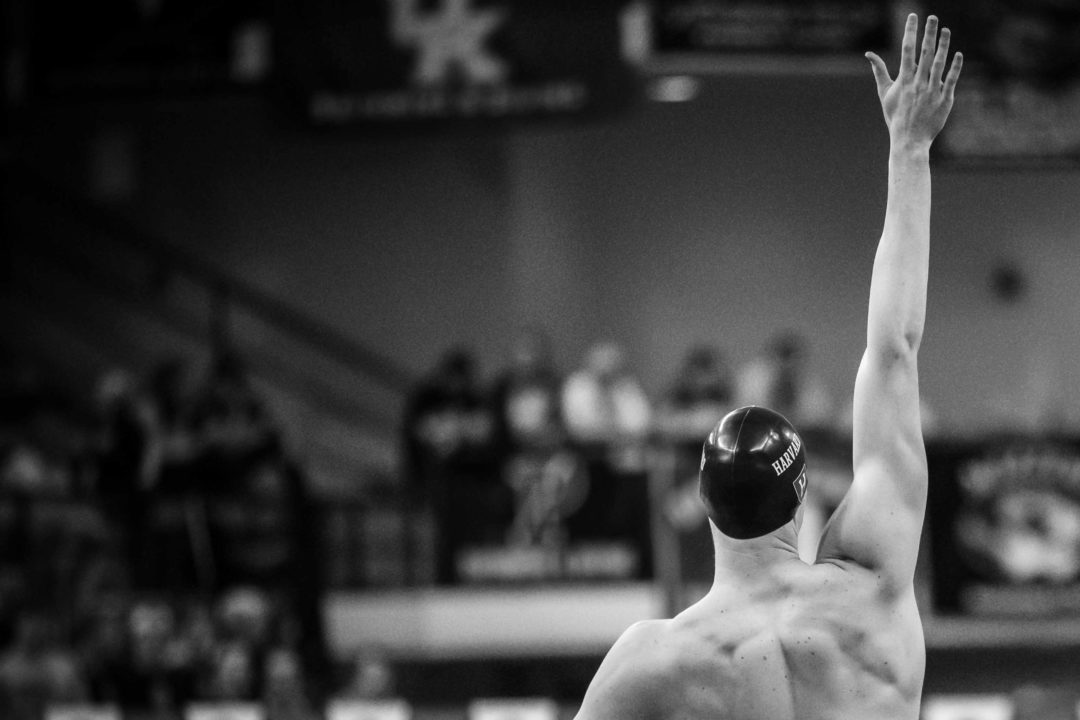 Success on college swimming's most visible stage is opening up new possibilities for Harvard. Current photo via Jack Spitser/Spitser Photography

The Netherlands’ Arno Kamminga made history tonight, becoming just the 4th swimmer ever to dip under the 2:07 threshold in the men’s 200m breast.

The Pitt swimming & diving program has announced the addition of 2 transfers, one for each team, both of whom will be eligible immediately.

Freeman describes the difficulties, largely mental, that come with trying to get back to a place you had previously been after being derailed like this

According to BBC reporter Nick Hope, FINA will not propose adding any new aquatic medal events for the Paris Olympic Games.

“To be quite frank about it, a lot of it has to do with Dean [Farris]’s improvement,” he told SwimSwam of the Harvard men’s meteoric rise to an NCAA eighth-place finish this year. “Obviously Dean scores a lot of points from an individual standpoint and then elevates our relays.”

Farris’ ascent has brought much more than just points to the program, however. Tyrrell and his staff have benefitted from Farris’ relationship with Texas head coach Eddie Reese. When he spent the summer training with Reese last year, the Harvard coaches were allowed to drop in as well.

“I think what Eddie does really well, that we’ve tried to incorporate here, is that pretty much everyone at his practices – all his guys are smiling, they’re having a good time, they’re working hard,” Tyrrell said. “And, at a place like Harvard, sometimes, our guys take life a little bit too seriously. So we’ve tried to relax and sort of enjoy the moments rather than try to do everything perfectly every single minute of the day.”

Reese’s methods are melding with Tyrrell’s own character-first approach. For Farris, that’s meant helping him mature personally first, and then as a swimmer second.

“Dean came in probably a little bit less mature than some other guys in terms of communication skills, and taking responsibility for his actions, and making choices that were his own when he got here freshman year. And he’s kind of embraced the model that we have around here, which is to take a step back, figure out what you want to do in your life, and then talk with knowledgeable people about what path you might take. And then making good choices that align with what your eventual goals are.”

Was he surprised by Farris’ season?

“Of course it’s a surprise when anybody gets an American record, because you know, nobody’s done that before,” Tyrell said. “But in another sense, you look at his development as a human being, and he’s starting to really be thoughtful, make good choices, really engage with what he’s doing in training. So I wasn’t surprised about how fast he swam at NCAAS. I actually think he should have been 1:28.7 on the 200 free, because he made a couple mistakes on it, used this legs too much on the first 50 of the 200. And then he shifted gears too quickly on the fifth 25 of the 200. So there’s a lot more to be done there with him.”

“At a place like Harvard, sometimes, our guys take life a little bit too seriously. So we’ve tried to relax and sort of enjoy the moments rather than try to do everything perfectly every single minute of the day.”

But Farris is just one guy, and one guy can’t finish eighth in a deep NCAA team scoring field. The Crimson also had senior Brennan Novak finish eighth in the 500, and he and classmate Logan Houck finished in the top-30 of the 1650. The 800, 400, and 200 free relays place in the top-10 and the medley was 13th.

Their success on college swimming’s most visible stage is opening up new possibilities for Harvard swimming.

“Part of it’s been that we’ve attracted some really good guys that can see themselves making and placing individually at NCAAs or being a part of an All-American relay or an Honorable Mention All-American relay,” Tyrrell said. “Mindset is a big thing that’s changed – just talking to people during the recruiting process, and saying that things are possible here that might’ve not been done in a while, but we do have a really good history of swimming and diving here, and we’re just trying to see what we can do.”

Suitable recruits can be hard to come by, however. Tyrrell, in his sixth season as head coach after 15 years spent in other capacities with the team, must look at prospective team members as students first and swimmers second.

“If they’re not in the right ballpark [academically], I tend to just say, ‘you know, I think it should look at another place,'” he said. “That’s how we have to drive our process here, because of the place I work.”

In order to manage the variety of ability levels on the team, Tyrrell says his staff now writes seven to 10 workouts a day.

“Basically what it comes down to is I have guys that are walk-ons onto the team – and I don’t like that term walk-ons, but that’s their level of swimming, and also how they got in here – all the way up to people like Dean.” Tyrrell said. “It’s just a matter of we’ve got great lane space at Harvard, and doing what’s right for each individual athlete, which includes a lot of individual meetings. So it’s not just the in-the-pool stuff that gets tailored.”

The dividends from Harvard’s individualized program are paying off for the Ivy League at large.

“I think it’s important for the league. I think sometimes Ivy League swimming gets sold a little bit short because we have such great academic reputations,” Tyrell said. “One of the things we try to do here is just to get our swimmers and divers to think at a higher level. So, on the academic side, that should be going for all A’s, but more importantly, you need to network with people to get to know how you can become a leader in your field and try to make the world a better place.”

“Swimming fits really well into that,” he continued. “Swimming can teach you some values and life lessons that get you out of your comfort zone and you can try to do some wonderful things here.”

Keep up the good work coach

He got a diamond-in-the-rough with Dean Farris. He says he’s trying to help Dean develop as a person as well as an athlete.

There’s so many super-smart kids at Harvard. You wonder how the swimmers can compete in the classroom when they are giving up study time to practice twice a day.

Well, student-athletes are often excellent students. College swimmers usually grew up managing swimming and school work. In terms of getting work done, they might even have an edge because of their discipline.

It depends on the school. I just read that the average grade at Harvard is an A-, so maybe it doesn’t matter there.

At UC Berkeley, they grade on the curve, so the average grade is a B or C+.

That’s not true about UC Berkeley (https://pages.github.berkeley.edu/OPA/our-berkeley/gpa-by-major.html) and also misses the point.

That’s an interesting chart to look at the GPA variation in majors. Depends on what you’re studying. Chemistry is going to be tough at Cal.

First, all Ivy’s are interested in the student first and athlete second. I believe they don’t even begin official training until Oct. 1st to allow time to get into the school mode. Second, most of these students have swam in programs with 15-20 hours of practice time per week (some omore than that) and have proved they can handle that and excel in the classroom. So might not be as difficult as it seems.

Being a swimmer, or an athlete, at an Ivy League school doesn’t mean that you aren’t as smart as the rest of the student body. I swam at Penn back in the 70’s, and for the most part, we were all very good students. Many went on to careers in medicine, law, tech, finance, etc. We competed well in the pool, and we competed well in the classroom. The fact that we had to give up time to swim from early Sept through March didn’t hinder our academic performance. I think what we gave up was predominantly free time. Smart students don’t necessarily study all of the time. Swimming forced us to budget our time wisely, or the reverse, we… Read more »

Nice to see two collegiate coaches working together like this.