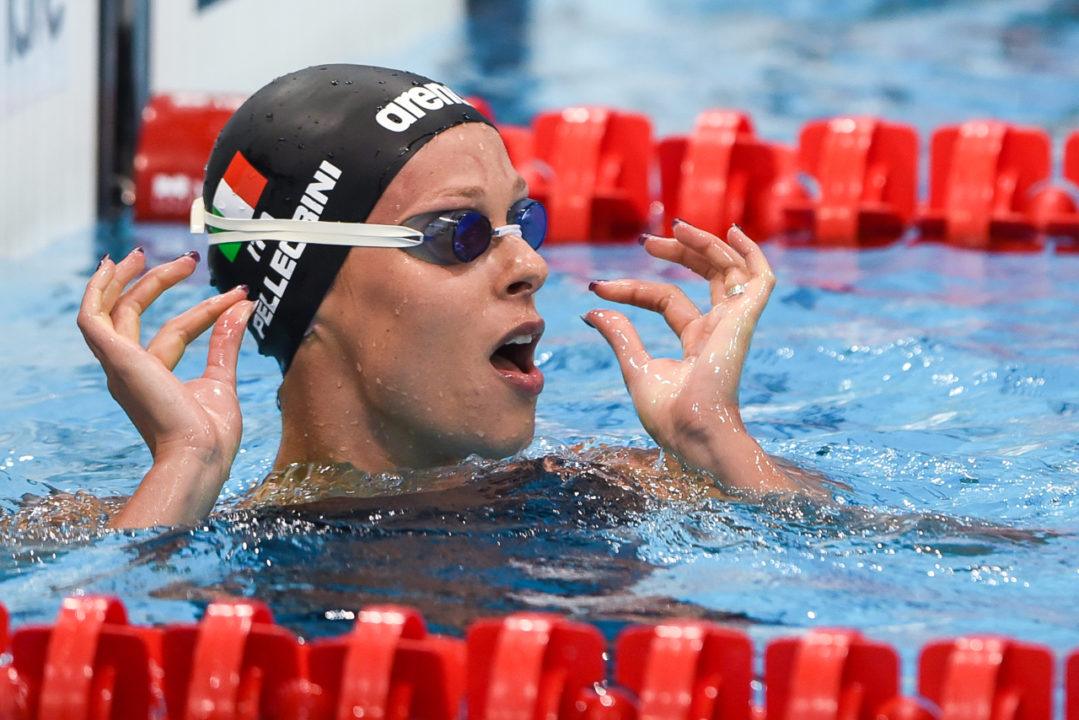 Falling short of the podium in Rio has only fueled Italy's Federica Pellegrini's desire to end her career as she wants. Archive photo via Peter Sukenik/www.petersukenik.com

As far as momentum being thrown in the right direction headed into the 2016 Olympic Games, few had more pre-Rio feats of speed than Italian Federica Pellegrini.

The world record holder in both the long course and short course versions of the women’s 200m freestyle, at 28 years of age, it remained to be seen if Pellegrini had another medal-contending swim in her to tackle the likes of America’s Katie Ledecky and Australia’s Emma McKeon in Rio.

Pellegrini started the final Olympic stretch by making her presence known in a big way at last year’s FINA World Championships, where she nabbed a silver medal in the 200m freestyle.

In June of this year, less than 2 months from the Olympic Games’ Opening Ceremony, Pellegrini let her light shine at the 2016 Sette Colli Trophy. While competing in Rome, Pellegrini scorched the field in a new personal best 100m freestyle time of 53.18, a mark which lowered her own National Record. Then, in her specialty, the 200m event, Pellegrini also put the world on notice at the same meet by firing off a swift 1:54.55. That outing represented the Verona native’s quickest time since 2009.

The forward-moving speed Pellegrini was carrying into Rio, along with the fact that she had earned both a silver and a gold 200m free Olympic medal in the 200m freestyle event in 2004 and 2008, respectively, put her in the conversation for 2016 Games podium contention. When all was said and done in Rio’s final, however, Pellegrini’s dedication and perseverance came down to losing out on the bronze medal to McKeon by less than .3 of a second.

Of the fact she fell into the tough spot of 4th place after such positive performances headed into Rio, Pellegrini told Italian media, ‘I feel a bit tired of having to deal with ‘such small margins’ every time, after years of hard training and sacrifice.”

But, the professional athlete acknowledges that, “in swimming, each time you enter the water, we know that you win and lose by tenths. You get there, you do all that is right, but do not take the medal. The anger was so great.”

Preparation-wise, Pellegrini was happy with how things unfolded leading up to the Games. “There was nothing wrong during the year: workouts, races, everything had gone well, I even improved my personal [best].”

There is light at the end of Pellegrini’s tunnel, however, as the Italian looks towards the 2017 World Championship, as well as a potential bid for Tokyo 2020, which would mark her 5th Olympic Games appearance.

“I want to get back to swimming and all the sacrifices that I did last year and then try again,” says Italy’s 2016 Olympic Games flag bearer.

“I need another race, even if winning will be increasingly difficult. If I stopped now I’d have left something outstanding and I do not like to leave things hanging. I have to close this cycle and I hope to do it as I want. “

The 2017 World Championships in Budapest should be her primary target. Sjostrom won’t race. Ledecky is in transition period and it is possible that she won’t be at her Rio form. Oleksiak has still to improve by 1% to be in contention. Competing practically at home Pellegrini will have advantage over McKeon. There is nobody else on horizon for the next 10 months at 200 free. It is a golden opportunity for Federica for the great and maybe last medal.

Amazing how shes been able to stay near the top for such a long period of time with so many coach changes and physical and emotional phases of life. There are very few athletes of any sport that have been able to do what shes been able to do. Shes a legend and comparable to Natalie Coughlin. Looking forward to Ledecky-Oleksiak-Pellegrini 200 free battles in the near future

I think this is a great decision..

Just to remind her career, she began at the highest level at Olympics2004 (she was second in 200 free at only 16 years of age), went on at Worlds2005 (and she was disappointed for that silver medal), suffered a serious shoulder injury in 2006 but rebounded strongly at Worlds2007, under the guidance of coach Castagnetti, with the WR in semifinal and the third place in final.

Then, the best years of her career in 2008-2009, when she was the undisputed best swimmer in the world both in 200 and 400 free (the 400 free final at Beijing was her greatest disappointment, because she suffered too much the pression of the race under a… Read more »

She is a true legend of the sport.

Thank you for the comprehensive summary of interesting facts.