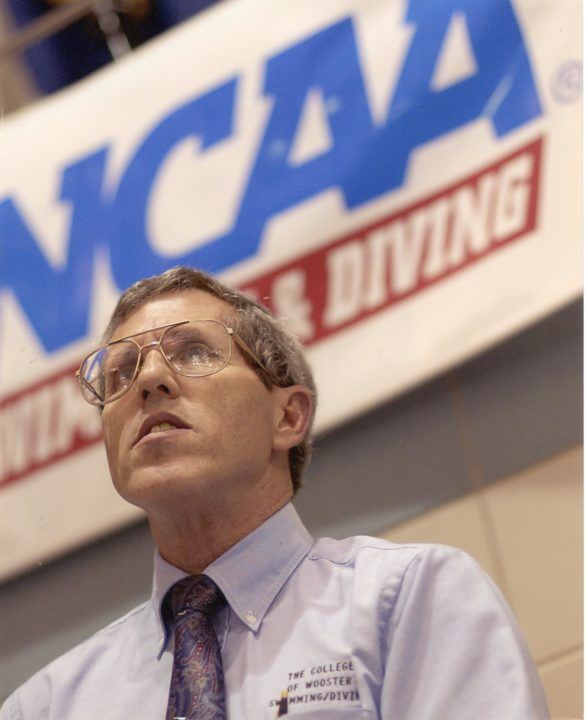 Rich Blough, a longtime member of The College of Wooster swimming & diving staff will be inducted into the International Masters Swimming Hall of Fame this Friday, Sept. 23, at the Hyatt Regency Hotel in Atlanta. Blough, now in his second year of his second stint, and 26th-year overall, as the diving mentor of the College, is the lone diver among this year’s eight inductees.

Blough’s charges at Wooster have earned 12 All-American certificates, with Liz Helstein‘s fifth-place showings in the one- and three-meter boards at the 1995 NCAA Div. III Championships ranking as the highest finish by a diver in program history. Additionally, Blough’s divers have earned 21 all-North Coast Athletic Conference accolades, in what is one of the toughest conferences in Div. III to do so.

“I had the distinct honor of having Rich as our diving coach for almost my entire career as a swimming coach,” said current athletic director Keith Beckett. “His ability to teach and motivate the student-athletes he coaches was extraordinary. Many of our program accomplishments and victories were because of Rich and the divers he developed.”

“Rich is a world-class diver and a world-class coach,” added current Wooster head coach Rob Harrington. “It is a tremendous honor to have Rich work with the College’s divers. His knowledge of the sport, his ability to coach, and his accomplishments on the board has inspired our present and past divers.”

As a competitor, Blough was a three-time All-American at nearby Hiram College. His post-collegiate highlights include 19 gold medals in international competitions.

He has also made coaching stops at the University of Kansas, Topeka West High School, and numerous high schools in Ohio.

Blough remains active on the national scene and has served as a referee at the NCAA Div. III Championships for the last 17 years, in addition to working as a diving judge at the Div. II Championships.

Courtesy of The College of Wooster Athletics.