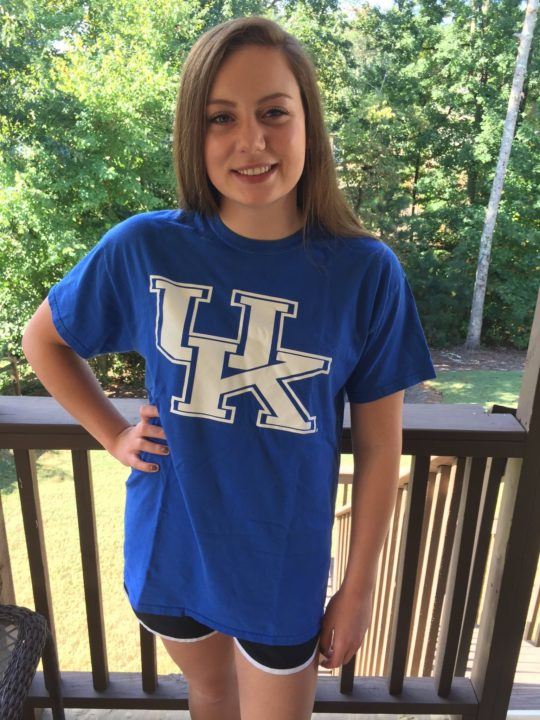 Jackie Hill of Chattahoochee Gold Swim Club verbally commits to swim for the Kentucky Wildcats in 2017-2018. Current photo via Twitter/jackiehilll

Jaclyn (“Jackie”) Hill from Georgia announced via Twitter that she has given her verbal commitment to swim for the University of Kentucky Wildcats for the 2017-2018 season.

So excited to say I have committed to swim at the University of Kentucky! Go Cats???? #BBN pic.twitter.com/QK50K3YmFX

Hill swims for Chattahoochee Gold Swim Club (she does not swim for a high school team), and is the State of Georgia’s top breaststroker in her class. She is a versatile addition to the Wildcats’ roster, who also has strong times in the 400 IM, 200 Free and 200 Fly. At the 2016 NCSA Junior National Championships (prelims were short course yards and finals were long course meters) Hill finaled in both the 100 (6th) and 200 Breast (8th). At that meet, her 100 Breast SCY was a personal best (1:01.85) and her 200 Breast SCY was within a half-second of her best (2:15.15).

Hill joins Lauren Edelman and Nora Fullenkamp by committing to the Wildcats for the 2017-2018 season. Hill is a big out-of-state pick-up for Kentucky because breaststroke has been arguably its weakest stroke over the past few years. Recent recruiting success, however, appears to be shoring up this deficiency as Kentucky looks to become more competitive in a very deep swimming conference. Hill and Edelman excel in similar events, but Hill has the advantage in both breaststroke distances and the 100 Fly, while Edelman is currently faster in the 200 Fly and both IM distances. When she arrives on campus, Hill will also have current freshman Madison Winstead as a training partner (current senior Kendra Crew will have graduated).

Congrats to Jackie! She and Ashlyn Schoof should be the headline every day for a month. Best of luck at UK.