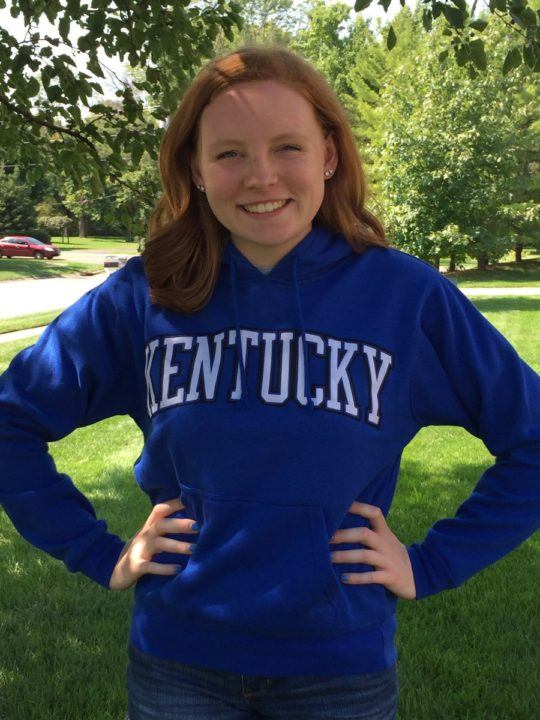 Dayton Raiders sprinter Nora Fullenkamp announced via Twitter that she had made a verbal commitment to swim at University of Kentucky beginning next fall. Current photo via Nora Fullenkamp on Twitter

Dayton Raiders sprinter and Centerville High School senior Nora Fullenkamp announced via Twitter that she had made a verbal commitment to swim at University of Kentucky beginning next fall.

I’m happy to announce I’ve committed to swim at the University of Kentucky next year! Go Wildcats ???? @UKSwimDive pic.twitter.com/SxXICUxiGZ

Fullenkamp swam for Centerville at the 2016 OHSAA Swimming & Diving Division I State Championships last February, where she placed third in both the 50 free (22.95) and 100 free (50.45). She also anchored both Centerville’s freestyle relays.

Fullenkamp was a 2016 Olympic Trials qualifier in the 50m freestyle. While she was just off her seed time in Omaha, she still finished 115th out of 178 competitors. She is a Winter Juniors qualifier in the 100 free. Her top times are:

Wildcats’ head coach Lars Jorgensen is still in rebuilding mode, and nearly half the women’s roster was made up of freshmen last year. The program saw its first-ever NCAA national title in March when Danielle Galyer won the 200 back.

Fullenkamp’s best 50 free time would have topped the UK best-performances list for 2015-16 and her 100 free would have been second. She would have scored in the C final at 2016 SEC Championships in the 50 free and would have been about 10 spots short of finaling in the 100.

Congrats Nora! Such a sweetie… Knew she would go here. UK should feel blessed