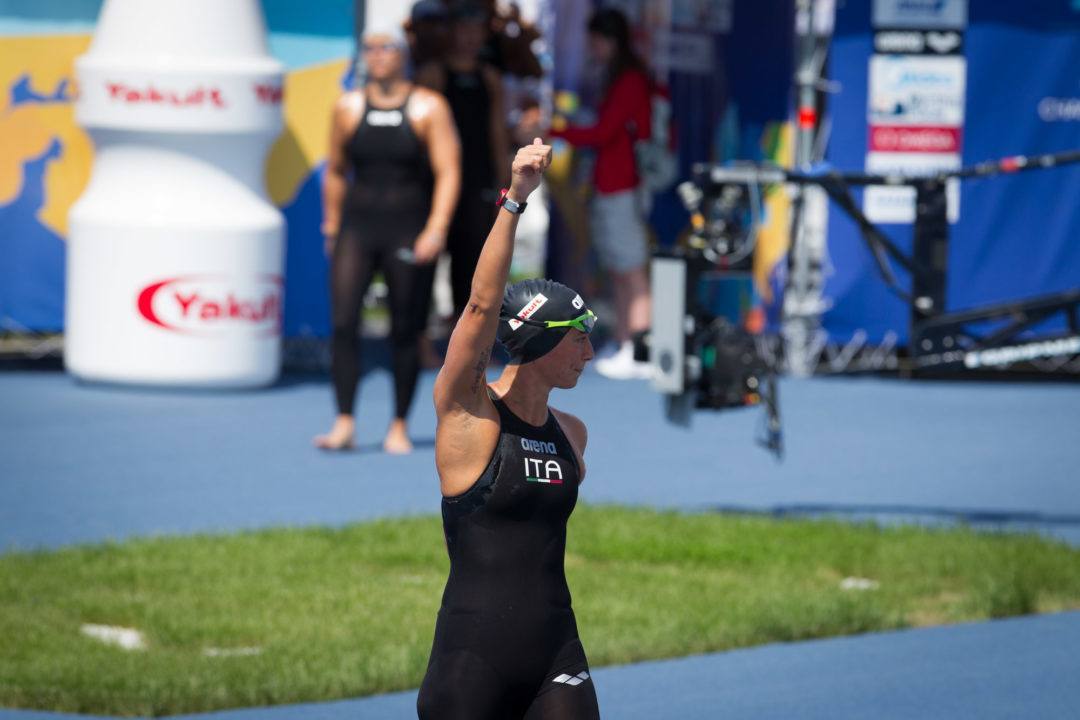 In a battle of 3 of the top 4 finishers from last year’s World Championships, Italy’s Rachele Bruni and the defending World Champion Aurelie Muller of France tied to share gold in the women’s 10km title on the opening day of the 2016 European Aquatics Championships in Hoorn, Netherlands.

Bruni and Muller recorded identical 2:07.00.1 times, and without being able to separate the two, they tied for the win and will share gold. A review of photographs and video of the finish could not discern clearly the victor.

The times were rather lackluster (about 9 minutes shy of the typical world-class pace), but with the top 4 finishers just a month away from Olympic dreams, they kept close to the broader pack – with the top 14 all finishing within 30 seconds.

The biggest story of the day was the 4th-place finish of defending champion Sharon von Rouwendaal of the Netherlands who came into this meet as the defending 10k champion.

While the nature of open water means that time projections can’t be made as confidently as in the pool, von Rouwendaal had perhaps the best chance at victory before she took a wrong turn at a buoy just before the finish. Von Rouwendaal went into that turn with a lead, but while returning to the correct course she was passed by the three women who ultimately finished in front of her.

Von Rouwendaal will be racing in both open water and the pool in Rio.

Two other contenders, both for this title and for the Olympic Games, were disqualified for making the same wrong term as von Rouwendaal in the chaos. Germany’s Isabelle Haerle, the defending European Champion over 5 kilometers; and Hungary’s Eva Risztov, who touched 3rd. Both were disqualified after the race, and the Hungarians have filed a protest of the finish.

I was 10 m from Sharon when it happened. A real bummer. I almost dropped my camera in the water when we screamed at her to turn. It was not a turning buoy but a buoy marking the final funnel of the race. About 60 m from the finish. She had momentum and looked like the winner.

I would say it could have been avoided with a better course mapping by Dear Sharon. Course was quickly bending and a temporary optical illusion made the right buoy look like the left. She was very relaxed after however.

At Swedish nationals yesterday we had two swimmers missing a buoy as well.

I wish more effort would be put into making the course unambiguous.

Yes. We don’t want front running to be a risk.

“defending” is sometimes (confusingly) used instead of “reigning” at meets different from the one where the title was won.

Von Rouwendaal properly retraced her steps. It was ruled that the other 2 did not.

Ah, I had the same question. Thanks.