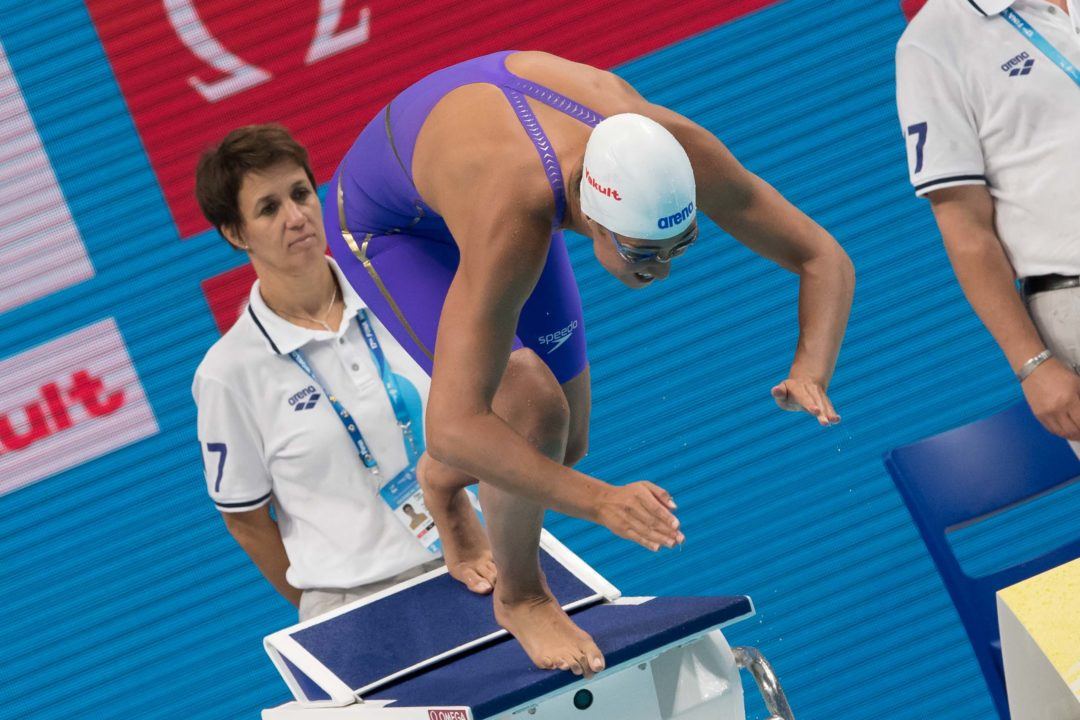 Andi Murez (above) is one of 6 Israeli swimmers who were chosen to fill out the country's 2 relay entries: the mixed medley and the men's 800 free relay. Archive photo via Mike Lewis/Ola Vista Photography

Israel has announced an 11-swimmer delegation for pool swimming at the 2019 FINA World Championships. The swimming portion of the meet will run from July 21st through 28th at the Nambu University Municipal Aquatics Center in Gwangju, South Korea.

In addition to the 5 swimmers who hit individual qualifying times at the country’s two qualifying meets (last weekend’s Sette Colli Trophy in Rome, and this weekend’s Israel Trials in Netanya); the country has appointed 6 additional swimmers to the roster for relay purposes.

Specifically, the country will enter a 400 mixed medley relay (which is now an Olympic event) and a men’s 800 free relay. The federation says that they were recommended to enter these relays by team coach Luca Gabriello and senior adviser (and 2016 US Olympic Team coach) David Marsh.

This includes sending an entire men’s 800 free relay of swimmers who didn’t hit individual qualifying criteria. The country has had 4 men swim 1:49.1-or-faster this year on flat starts, with a 2019 aggregate time of 7:15.05, without accounting for relay starts. While that time is unlikely to medal or final, it puts the squad well within contention of a top 12 finish and a qualifying spot for next year’s Olympics. Denmark was 12th in this relay in 2017 with a 7:15.95. What’s more, it’s a very young relay, with 3 teenagers and a 22-year old Namir. Both Frankel and Loktev have been 1:47s in the 200 free, so there is some finals-worthy upside for this relay.

The Israel Swimming Association did not mention specific event entries or if those relay swimmers would be allowed to race additional individual entries, though historically they have been able to. In 2017, the country sent 13 pool swimmers: 9 men and 4 women.

Jonatan Kopelev was the country’s lone pool swimming finalist at the 2017 World Championships when he placed 8th in the 50 backstroke. He is battling a broken finger right now.

The team will leave next week for a training camp in Jeju, South Korea.

Israel will also send 5 swimmers to race in open water swimming, including former US National Teamer and World Championship bronze medalist as a member of Team USA Eva Fabian.

Israel has never medaled in any discipline at the FINA World Aquatics Championships (which includes only long course swimming).