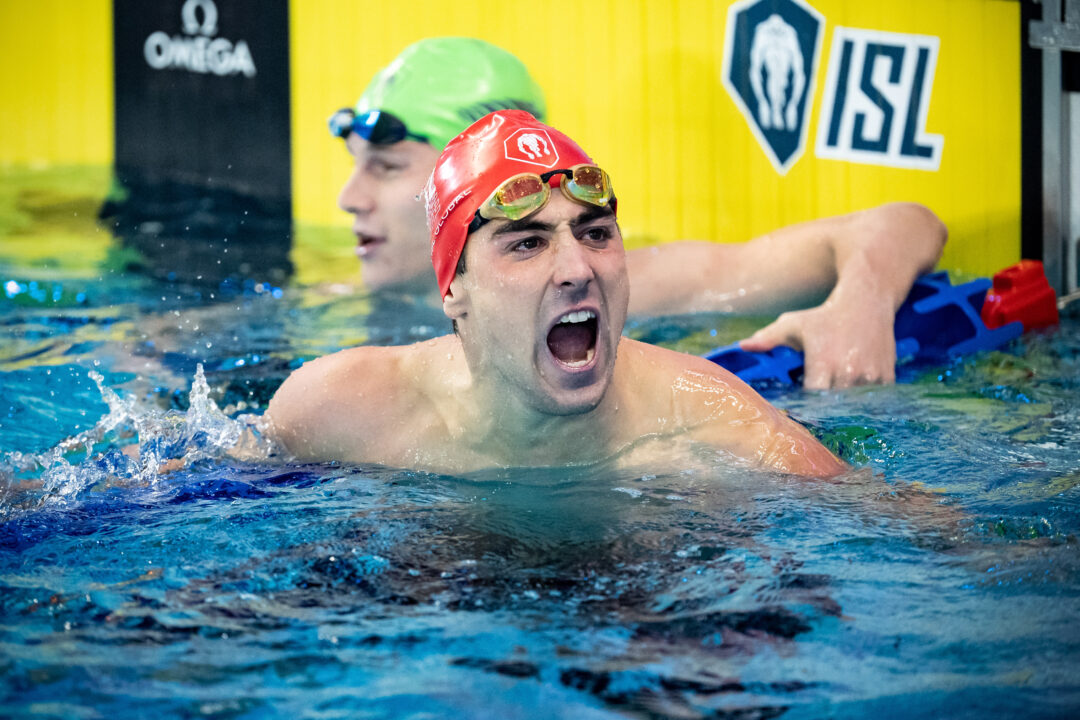 A lifetime best, and the #1-ranked time in the ISL this season, for Jacob Pebley in the 200 back helped lead DC Trident to a 50-point lead after day 1. Current photo via Giorgio Scala / Deepbluemedia / Insidefoto

The 2021 ISL League Final is here! Energy Standard, the Cali Condors, the London Roar, and the LA Current will once again battle for the league title.

Cali didn’t have Caeleb Dressel in Match 6, but several key Condors contributed to the team’s victory, including Kelsi Dahlia and Beata Nelson (Pictured).

Energy Standard holds the top 3 spots in this season’s ISL MVP rankings, with Sarah Sjostrom and Siobhan Haughey figuring to battle for the season MVP.

Energy Standard teammates Sarah Sjostrom and Siobhan Haughey own two of the top three performances from the ISL playoffs on the women’s side.

The DC Trident jumped out to a commanding day 1 lead in Match #11 of the 2021 ISL season: the Play-In Match.

The top 2 of the 4 teams competing this week will advance to participate in the Playoff round in Eindhoven in November, and after day 1, the Trident look comfortably in control of that standing, with Iron 2nd.

While it appears, on paper, as though there’s still a tight battle between Iron and Tokyo, we know that Iron is very strong in day 2 of this season, especially in Skins races. Iron, in fact, has scored the second-most points of any team in the ISL this season in Skins racing, while the other three teams in this match are the three worst teams in that category.

As SwimSwam’s Barry Revzin put it, DC was left with a fairly easy choice here. When left with freestyle and butterfly as their choices, there was only one choice. Ryan Hoffer of DC won the 50 free, albeit by a narrow .06 second margin ahead of Iron’s Thom de Boer, but Iron’s Nicholas Santos is one of the biggest skins weapons in the whole league. In a 50 fly skins race, DC would be lucky to score at all, so any points they can get from Hoffer is a relative bonus.

While New York and DC managed to successfully block Ranomi Kromowidjojo, one of the best skins swimmers in the league, from participating (breaststroke is the one event where Iron definitely won’t use her), they couldn’t stop Iron from still having a big advantage here.

Ida Hulkko dominated the individual women’s 50 breaststroke on Wednesday, swimming 29.68 and collecting 6 Jackpot points on top of her 9 for a win.

While Tokyo’s Miranda Tucker is the 2nd-best swimmer in the field, that is not a strong event for DC. So, maybe this gives Tokyo a puncher’s chance of an upset and taking 2nd place from Iron – but it’s not likely. The more likely outcome is that this is enough for Iron to jump DC for the meet win, with those two teams advancing to the Playoff.