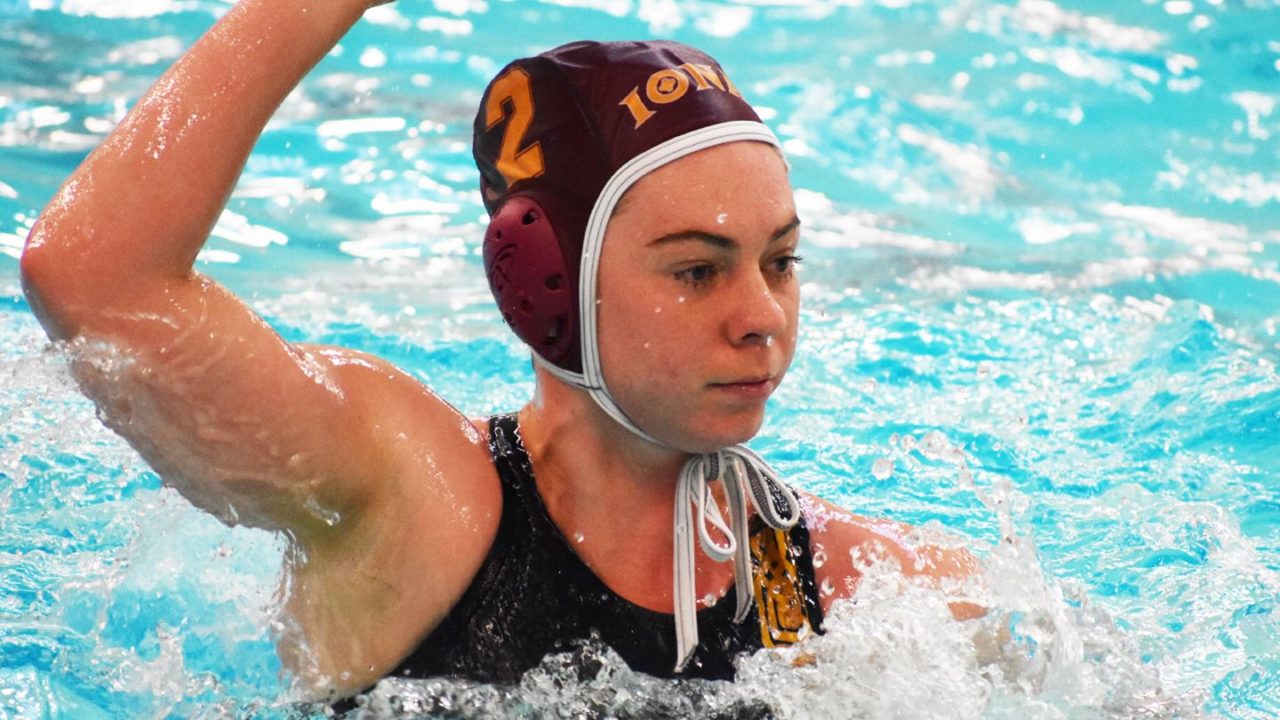 Goals were coming fast and furious on opening weekend of the collegiate women's water polo season. Here are the conference award winners from Week 1. Current photo via Iona Athletics

Goals were coming fast and furious on opening weekend of the collegiate women’s water polo season.

Below are the standout players from each conference.

Player of the Week: Ciara Franke, UC San Diego – Scored eight goals as the Tritons went 3-1 at the UCSB Winter Invite; put in a career-high five goals, including the game winner in a 14-13 overtime win over #4 Cal; logged a hat trick in an 8-6 loss to #2 UCLA; registered assist and a steal in 19-8 win over Iona.

Player of the Week: Ava Morrant, Michigan – Posted seven goals, three steals and an assist as the Wolverines went 2-2 at the UCSB Winter Invite; logged hat tricks in an 8-7 win over #22 Cal State Northridge and a 14-9 loss to #5 UC Irvine; notched a goal and two steals in a 8-7 loss to #4 Cal; added an assist in a 9-7 win over #11 UC Santa Barbara.

Defensive Player of the Week: Heidi Ritner, Michigan – Grabbed 30 saves and made seven steals at the UC Santa Barbara Invite; tallied a career-high five steals alongside 10 saves in a 9-7 win over #11 UC Santa Barbara; tallied five saves in one half of play in an 8-7 win over #22 Cal State Northridge; made eight stops in a 14-9 loss to #5 UC Irvine; chipped in seven saves in an 8-7 loss to #4 Cal.

Rookie of the Week: Anne Rankin, Michigan – Logged four goals and three assists for the Wolverines on opening weekend; scored the opening goal of the 2020 season in an 8-7 win over #22 Cal State Northridge; netted two goals in a 14-9 loss to #5 UC Irvine; tacked on an assist in an 8-7 loss to #4 Cal.

Offensive Player of the Week: Jordan Van Reeken, Iona – Recorded 14 goals, including five goals and two assists in a 16-4 win over Ottawa (Ariz.); accumulated nine more goals as the Gaels faced three Top 12 teams, notching four goals in a 19-8 loss to #12 UC San Diego and in a 16-4 loss to #2 UCLA.

Defensive Player of the Week: Jordin Hale, Iona – Made 31 saves on 72 shots in four games at the UCSB Winter Invite; added three steals in a 16-4 loss to #2 UCLA.

Player of the Week: Abbi Hill, UCLA – Led the Bruins in scoring with nine goals and added five steals, four assists, four drawn exclusions and two field blocks; scored a game-high three goals in the team’s 9-8 loss to #11 UCSB; put in the game winner in a 8-6 win over #13 UC San Diego.

None. Three SCIAC teams open the season on Jan. 25.

None. Sonoma State and Fresno Pacific were in action on opening weekend.