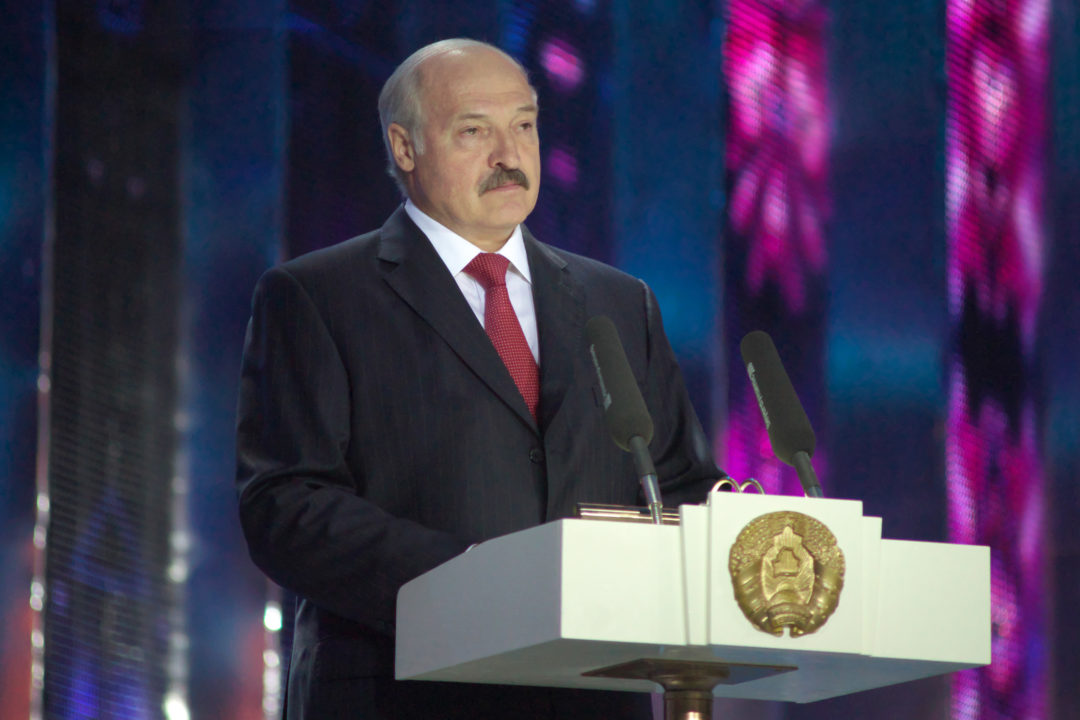 Belarusian President Alexander Lukashenko, who is also the head of the country's National Olympic Committee, has been barred from all IOC activities. Archive photo via Serge Serebro, Vitebsk Popular News

Over the weekend, thousands of demonstrators marched in the Belarusian capital of Minsk and around the country to demand the resignation of President Alexander Lukashenko. Police arrested more than 100 people amid the demonstrations.

The demonstrators are protesting Lukashenko’s declaration of victory in an August 9 presidential election, which opponents say was “rigged.” The protests have led to crackdowns in the country and violence, with thousands of arrests having been made in the last 4 months. Many of those arrested say they were tortured and abused while in custody.

The European Union sanctioned Lukashenko and several of his allies over the election rigging and subsequent crackdowns. Political opponents were at times detained and ultimately many were forced to flee the country. Many Western nations, including the United States and the EU, have refused to recognize Lukashenko as the legitimate president of Belarus.

The IOC’s initial action will exclude currently elected members of the Executive Board of the National Olympic Committee of Belarus from all IOC events and activities, including the Olympic Games. That includes Lukashenko, who holds a dual role as the president of the Belarusian Olympic Committee and its legal representative.

The IOC will also suspend all payments to the NOC of Belarus, with the exception of those related directly to preparations of Belarusian Athletes for the Tokyo 2020 and Bejing 2022 Olympics. All Olympic scholarships will now be paid directly to athletes.

There are currently no voting members of the IOC from Belarus, so this suspension won’t directly impact the makeup of the electorate that makes important decisions like hosting duties of future IOC events.

Lukashenko has told the media that he may have served as president for too long, but has refused to step down, citing the belief that his followers would be “slaughtered” if he were to do so.

1. Exclude the currently elected members of the Executive Board of the NOC of Belarus from all IOC events and activities, including the Olympic Games. This includes in particular Mr Alexander Lukashenko, in his capacity as NOC President and legal representative of the NOC; Mr Viktor Lukashenko, in his capacity as NOC First Vice-President and the person responsible for the NOC’s operations and activities on a daily basis; and Mr Dmitry Baskov, in his capacity as an NOC Executive Board member and in view of the specific allegations raised against him. This provision is not applicable to Mrs Tatiana Drozdovskaya, as she is an ex-officio athletes’ representative on the Executive Board.

2. Suspend all financial payments to the NOC of Belarus, with the exception of payments related to the preparations of the Belarusian athletes for, and their participation in, the Olympic Games Tokyo 2020 and Olympic Winter Games Beijing 2022. All Olympic scholarships for Belarusian athletes will now be paid directly to the athletes, and no longer through the NOC.

3. Request the relevant International Federations to make sure that all eligible Belarusian athletes can take part in qualification events for the upcoming Olympic Games without any political discrimination.

4. Suspend any discussions with the NOC of Belarus regarding the hosting of future IOC events.

Go ahead and sanction Belarus’ President BU how about the leaders of Turkey and Azerbaijan?
They just attacked the Armenians with Syrian ISIS fighters.