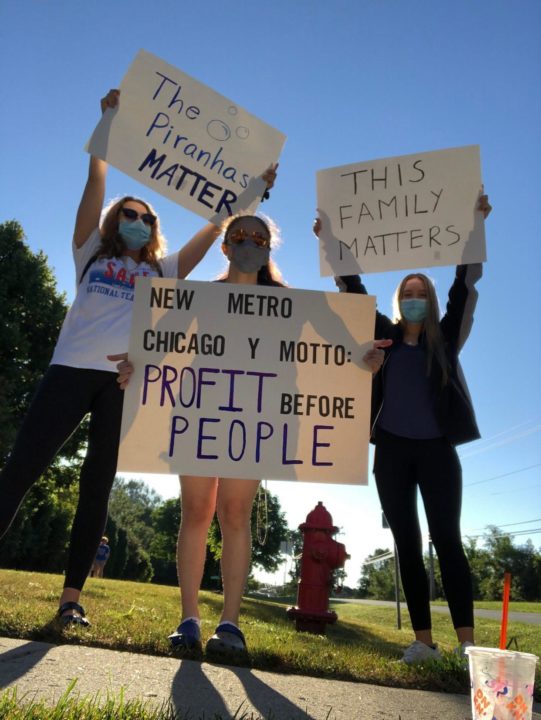 YMCAs around the country are struggling financially, and the national organization is focused there, rather than hosting national events, for 2021. Current photo via Sage YMCA Piranhas

After the cancellation of the YMCA National Championships for 2021, a group of coaches got together to organize an unofficial virtual replacement event.

Swimming at the YMCA level will include a ‘National Swimming Festival’ with regional competitions compiled together for national rankings.

The bombshell news on Monday evening that The Y was cancelling both its short course and long course national championship meets for 2021, with the former still about 5 months away and the latter about 9 months away, shook up what is a huge entry point for many into the sport of competitive swimming.

With talk of vaccines coming in 2021, and a lot of time for the situation to change, questions have spanned from a simple “why so early?” to “is this the end of the YMCA’s competitive swimming program?”

SwimSwam has been told that, privately, The Y has said that broader financial concerns are involved in the decision to cancel the meet. Essentially, with YMCA branches around the country closing their doors because of the financial challenges caused by the coronavirus pandemic, the national office was not willing to allocate money to national events of any kind for the time being. Instead, their focus is on keeping those branches, which are the foundation of the organization, open.

Around the country, dozens of branches have been closed over the last 66 months. A branch in West Dallas, 3 YMCAs in suburban Chicago, 2 branches in Rochester, New York, a branch in suburban Detroit, another in nearby Lansing, and another in Lincoln, Nebraska are among the casualties.

The YMCA of Central Florida has shut down its competitive swimming program permanently, and a team in suburban Chicago says that their YMCA is now trying to “push the swimming program out” by reducing the size of the team among a return-to-training plan.

The YMCA has not issued any kind of national pause of competitive swimming programs like they did in the spring of this year, when they canceled the 2020 National Championships, so teams are allowed to continue competing and training as local regulations allow.

The YMCA has evolved many times since it was founded in London in 1844 as the wants and needs of the public have evolved. Like many businesses, it appears as though the coronavirus will force it to evolve one more time to stay alive.

Indoor facilities with poor ventilation are just too much of a risk, at this stage of the pandemic.

Actually there are studies that show indoor pools are safer because the area just above water level has levels of chlorine which limits the transition of Covid whereas outdoor pools “blow” that layer away. #science

I lost my job at a large Y outside the Boston area. I can tell you…this was no COVID related issue…it was admitted to staff by the CEO in broad terms “we’ve mismanaged and overspent and we no longer have the money to sustain all of our programs”. This is the second Y team I’ve been apart where I’ve lost my job due to fiscal mismanagement. Let me tell you…the y is being run by idiots from the inside. I don’t think I’ll ever coach YMCA ever again, which is a shame because I was a Y lifer. Terribly disappointed in the YMCA nowadays, especially knowing what I know and seeing what I’ve seen.

The bright side for me… Read more »