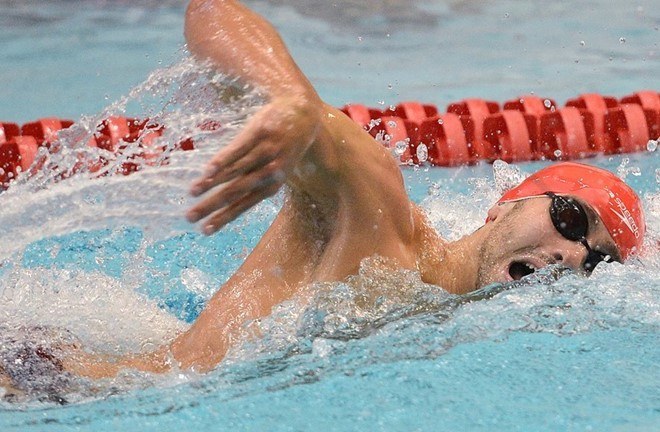 The Indiana men’s and women’s swimming and diving teams will host the Louisville Cardinals on Senior Day on Friday, Jan.... Current photo via Indiana Athletics

The Indiana men’s and women’s swimming and diving teams will host the Louisville Cardinals on Senior Day on Friday, Jan. 27 at the Counsilman-Billingsley Aquatic Center in Bloomington, Ind. on Friday.

Senior Day festivities will begin at 1:40 p.m. ET on the pool deck.

The Hoosier men enter Friday’s meet ranked No. 4 in the nation in the CSCAA/TYR Top 25 with a 10-0 record in dual meets this season, while the Louisville men are ranked No. 7 in the country.

The IU women enter the meet ranked No. 14 in the nation with a dual-meet record of 7-3, while the Cardinal women’s squad is ranked No. 10 in the country.

Friday will be a standard, 32-event dual meet featuring the 200 medley relay and 400 freestyle relay.

– West side of Eigenmann Parking lot at 10th & Union will be free of charge.
– IU SRSC lot will be $10 (Note: Cars parking in the grass or not in a parking spot may be ticketed or towed).

– Jordan Garage will be $10 (must show meet flyer/program to receive event rate).

– Guests parking in the Sunrise lot on 10th St without proper university permit may be ticketed or towed.

Hoosiers in the CSCAA/TYR Top 25
In the fifth CSCAA/TYR Top 25 released on Jan. 18, the Indiana men were ranked No. 4 in the nation, while the IU women came in at No. 14.

King Wins Two NCAA Titles in 2015
Indiana’s Lilly King dominated the breaststroke at the 2016 NCAA Championships, winning both the 100 and 200 breast with the fastest short-course yard times in history. The freshman broke every record in the event with her historic swim – the American, NCAA, NCAA Meet, U.S. Open, Indiana school, Big Ten and Georgia Tech Pool records – and owns all of the aforementioned records in both the 100 and 200 breast. In total, King recorded an impressive four All-America honors at her first NCAA Championships.

IU Swimming & Diving on Social Media
Be sure to keep up with all the latest news on the Indiana men’s and women’s swimming and diving teams on social media – Twitter, Facebook and Instagram.