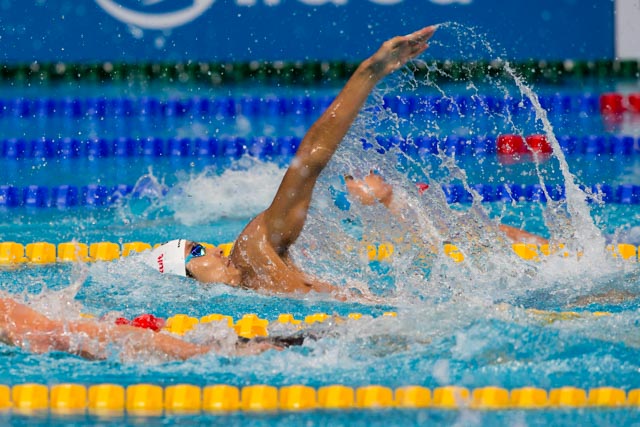 As is typical in a post-Olympic respite, there have been multiple athlete and coaching changes throughout swim clubs and federations around the world. Chad Le Clos left long-time coach Graham Hill for Cape Town, Australian Mitch Larkin took a club-visiting tour down under, while Britain’s Plymouth Leander coach Jon Rudd moved on to take the reins of Swim Ireland.

An additional change that flew under the radar until recently is Japanese backstroking stalwart Ryosuke Irie joining SwimMAC’s Team Elite. Leaving his Japanese training ground of Kinki University, Irie says he is kicking off his final Olympic push by joining the David Marsh-led squad in Charlotte, North Carolina.

The just-turned 27-year-old broke though big time internationally at the 2012 Olympic Games in London, earning individual silver and bronze in the 200m and 100m backstroke events, respectively. He was also a critical member of the Japanese silver medal-winning 4x100m medley relay. Irie wasn’t as fortunate in Rio, although he did manage to final in both backstroke races once again. The Osaka native finished 7th in the 100 and 8th in the 200 , while helping Japan to a 5th place finish in the medley relay.

Team Elite itself has gone through a transition, with perhaps its highest-profile athlete Ryan Lochte moving out West, while Bermuda’s Roy Burch retired and the Bahamas’ Arianna Vanderpool-Wallace taking time off at Auburn. Olympic champion Anthony Ervin,  bronze medalist Katie Meili, Trials finalist Madison Kennedy are among the remaining members, with Brazilian sprinting standout Matheus Santana having recently joined the squad as well.

and I thought some Israelis were there training too?

Yes. A few top Israel national teamers are coming state side to train with elite.

Come on now. Why not go to Cal and train with the best?!

Word on the street is you have to be a former Cal swimmer to train with them as a pro.

After Irie and Santana joined, it seems like SWIMMAC would be a good place for Lochte to have trained.
Sprint with Santana, backstroke work with Irie, Fly with the guys like Phillips, etc.

I don’t know where Lochte fits in on the west coast. I think it would be strange if Durden actually allowed a non-Cal grad to train with the Bears. Salo is more of what he got at SWIMMAC with sprint and technique and nonconventional training. That didn’t work amazingly for him. I don’t know.

He moved mainly because of his fiancé in California. IMO. Since she is now pregnant.