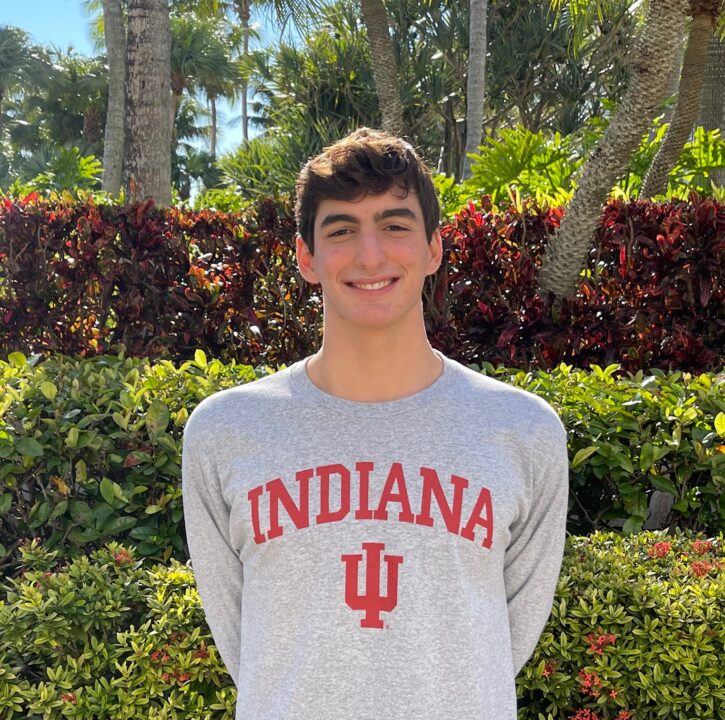 A versatile swimmer with talent in multiple strokes and one of the top swimmers in Florida, Smiley will join the Hoosiers in the fall of 2023

A two-event A-finalist at the 2021 Florida 1A State Championship meet, Dylan Smiley of Miami, Florida has announced that he will be heading north in the fall of 2023, committing to join the swim team at Indiana University. Smiley is currently in his junior year at Miami Country Day School.

I am super excited to announce my verbal commitment to swim at Indiana University! Special thanks to my family, friends, and coaches for supporting me along the way. GO HOOSIERS!! 🔴 ⚪️

Last fall, Smiley finished in the top-8 of both the 100 breast and 100 fly at the FHSAA Florida 1A State Swimming and Diving Championships. His best swim came in the 100 fly, where he claimed a spot on the podium with a third-place finish. After touching in 49.53 during prelims, he dropped nearly a full second during finals to stop the clock at 48.59. He also added a seventh-place finish in the 100 breast with a time of 56.85.

Last summer he also appeared in the finals of both the 100 fly and 100 breast, as well as the 200 breast, at the Futures Championships in Huntsville. His highest finish again came in the fly, where he stopped the clock at 56.61 for 22nd.

Indiana’s men are coming off their 4th Big-10 Championships title in six seasons after claiming the top spot at the 2022 Big-10 Championships. The Hoosiers were especially strong in the fly events, with three men making it into the A-final of both the 100 and 200. In the 100 fly, the team was led by sophomore Tomer Frankel, a 2021 Olympian for Israel, who took 2nd. The team was also led by an underclassman in the breaststroke events, with Josh Matheny claiming third in the 100 breast and second in the 200 breast.

While the Indiana roster is deep in both the breast and fly events, Smiley still has over a year to improve before he arrives on campus in 2023. This season, he would have ranked in the team’s top-10 of both breaststroke events, as well as the 100 fly.

Smiley will be joined by Sean Sullivan, William Raches, and Toby Barnett as freshman in the fall of 2023