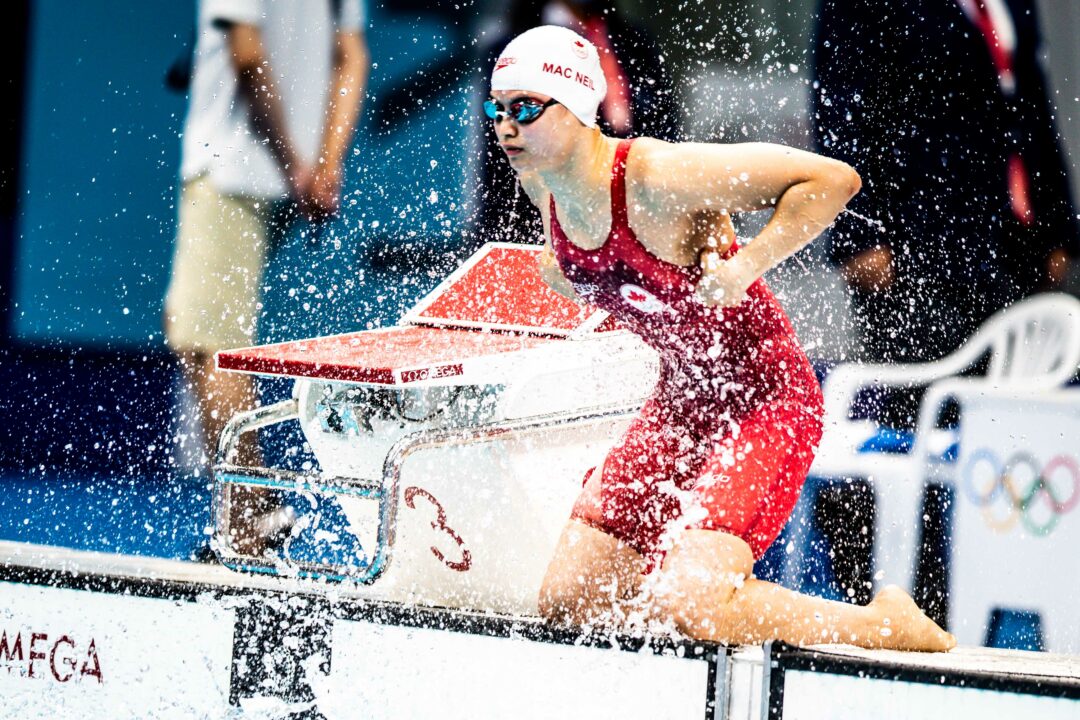 In her first-ever meet as an LSU tiger, MacNeil split 22.29 in the 50 fly, which ties for the eighth-fastest split of all time in the event. Archive photo via Jack Spitser/Spitser Photography

On Saturday, LSU held its annual intrasquad meet, where the swimmers were separated into “purple” and “gold”  teams and competed against each other. The gold team ended up winning by one point, with the score being 261 to 260.

Based on the stories from LSU Swimming and Diving’s Instagram account, the swimmers seem to be unsuited for this meet.

NOTE: LSU told SwimSwam that there were errors with several splits in the 200 medley relay and 400 free relay. However, head coach Rick Bishop confirmed that MacNeil’s 50 fly split was correct, and that she also was the one who split 46.90 in the 400 free relay (the PDF results page says that Peyton Curry split that time).

The big highlight of this meet was Maggie MacNeil, who competed in her first-ever meet for the tigers. She swam her first four seasons with the Michigan Wolverines and transferred to LSU for her fifth year of eligibility, reuniting with her former coach, Rick Bishop.

MacNeil opened up her meet with a 22.29 50 fly split in the 200 medley relay, which (unofficially) ties as the eighth-fastest split of all time in the event. This is the quickest MacNeil has ever gone in the 50 fly on a relay, as her fastest split prior to today is a 22.39, which was clocked at the 2019 Big Ten Championships. However, it’s important to note that MacNeil swam backstroke in the majority of medley relays in her time at Michigan, so she didn’t have many opportunities to throw down fly times off relay starts in the past.

Individually, MacNeil raced the 100 fly and 50 free. In the 100 fly, she swam a time of 51.62, opening in 24.56 and closing in 27.06.  That time would have been fast enough to make the ‘B’ final at last year’s NCAA championships—a pretty impressive result considering that it was done in the middle of September. Her best time in the event stands at 48.89, which is the NCAA record.

Then, MacNeil competed in three rounds of 50 free skins, where she claimed first in every round. She cruised through the first two rounds, swimming a 23.47 in round one and a 23.26 in round two. Finally, in round three, she blasted a 21.90 to beat runner-up Michaela De Villiers by nearly two seconds. Like the 100 fly, her 50 free time also would have made the ‘B’ final at NCAAs last year. MacNeil has been as fast as 21.17 in the 50 free, a time set at 2021 NCAAs when she took second to Kate Douglass by 0.04 seconds.

To close things off, MacNeil split 46.90 in the 400 free relay. That time almost matches her time at NCAAs last year in the same relay, when she split 46.80 to help Michigan take fourth. The fact that she went as fast as NCAAs both in-season and right after swimming another relay, a 100 fly, and three rounds of 50 frees bodes well for the rest of her season.

Earlier this year, MacNeil broke her elbow from slipping on deck at NCAAs. She did not race individual events at the World Championships due to mental health reasons, but won gold in the 100 fly at the Commonwealth Games.

On the men’s side, Brooks Curry had a few notable performances. He won the men’s 50 free skins, but took an opposite approach from MacNeil: going all-out in the first round and getting progressively slower in the next two. He started off with a 19.64 in round one, and then went 20.26 in round two and 21.29 in round three. In addition, he also anchored his mens’ 400 free relay in a time of 43.74.

One swimmer that was missing from the intrasquad competition was Jade Hannah, who recently transferred to LSU from USC. Her absence from this event was due to a shoulder injury that she suffered in the weight room; one that head coach Bishop said was not serious, but they didn’t want to risk anything early on in the season.

All Other Individual Event Winners:

Just cannot get over how fast people are now.

I think Carson Foster went 3:35 in the 4 IM at their intrasqaud a year or two ago. Not sure if it was in September or October though.

Honestly excited for not only MacNeil, but all of LSU this year. The program looks like it could doing a slow grind upwards and I’m looking forward to it (esp on the side of the mens)

22.2 unsuited in September is quite unreal. We could see a 21.5 fly split from her come March. And I think we will see that 48.8 lowered come NCAA. Maggie back training w Bishop sounds like a lethal combo

She has always performed well in very early season. First swim at Michigan unsuited was a school record.

Could be wrong but I sincerely don’t think they meant it as a criticism of McNeil in the slightest, moreso just a dumfoundedness at how fast Popovici is. It is a pretty wild statistic given that we’re all quite impressed with McNeil’s split (and overall performance this weekend).

Look, I’m all aboard the Popovici hype train, but commenting about how his LCM time is faster on an article that has nothing to do with him is a liiiiiiitle bit reaching. Especially when you’re comparing a men’s meters race at European champs to a women’s yards race at some intrasquad meet in September lol.

now that I compare the times, it’s pretty interesting how far behind the 100 back is compared to the other 3 strokes (comparing men’s 100 LCM to women’s 100 SCY).

In the 200, women’s SCY is clearly faster for free breast and back but Milak’s 200 fly time would be a very elite women’s SCY time

Why did she transfer to LSU?

Because Rick Bishop, who was her primary coach at Michigan, is now the head coach there.

Nah, there are far superior burgers out there.