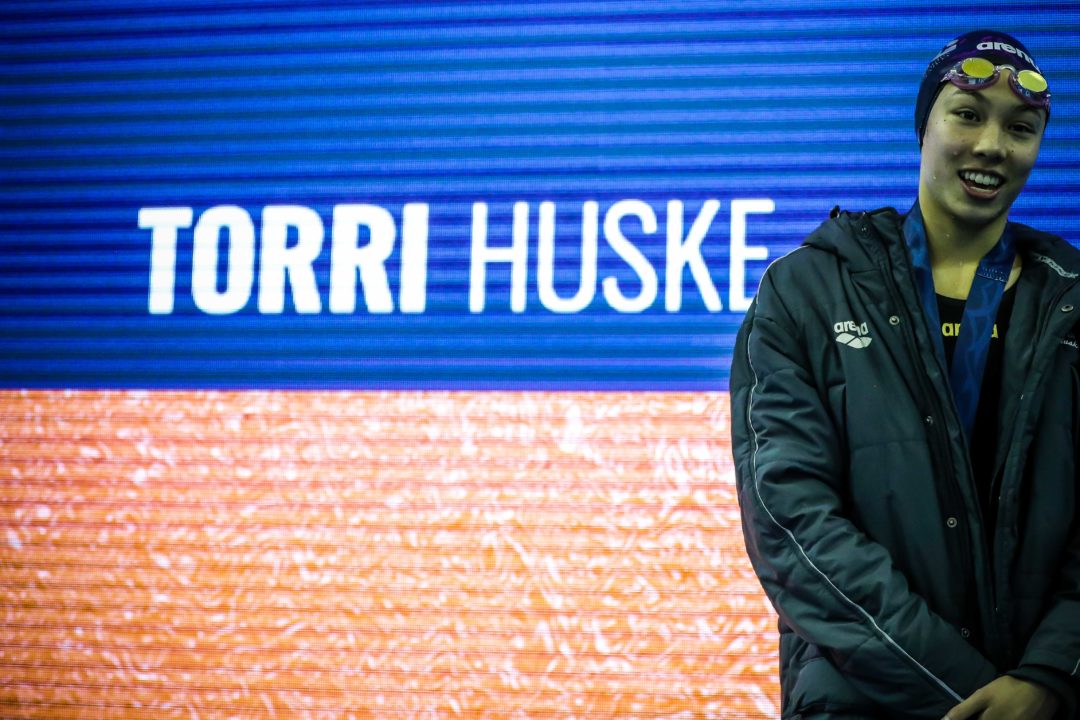 The 17 year-old Huske moved to #2 all-time in the 17-18 age group in both the 50 free and the 100 fly, at Potomac Valley's 18&U Winter Championships. Archive photo via Jack Spitser/Spitser Photography

This week kicks off the period where times will count for what will be a very different Winter Junior Championships this year, as all times by 18&U swimmers at any sanctioned, approved, or observed meet between December 1st and 13th will count towards the championship rankings, assuming that the swimmers already had the necessary time standard in that event.

The Potomac Valley LSC is a hotbed of fast swimming, and it was not surpising at all to see some scorching times on the first day of its 18&U Championships today.

Sure enough, 17 year-old Torri Huske of the Arlington Aquatic Club rattled two different 17-18 National Age Group records tonight. First, she won the 50 free in 21.43, touching well over a second ahead of anyone else in the field. That’s a new personal best for her by exactly 0.40s, and also moves her up to #2 all-time in the age group. She’s now only 0.11s away from the record of 21.32, set by Simone Manuel back in 2015. Huske moved up from #9, jumping over a veritable “who’s who” of top notch sprinters, including Abbey Weitzeil, the currently the fastest woman ever in the 50 free at 20.90, and who was 21.49 at 18.

We didn’t see anything like Huske’s swims on the men’s side, but it was certainly wasn’t bereft of fast swimming. Anthony Grimm of the Mason Makos, the #2 recruit in this senior class, won the 50 free in 19.99, his 4th time under 20 seconds. He was the only boy under 20.0.

Gentry is just pure legendary. The dude is crazy

Went BIG in the 200FR prelim this morning