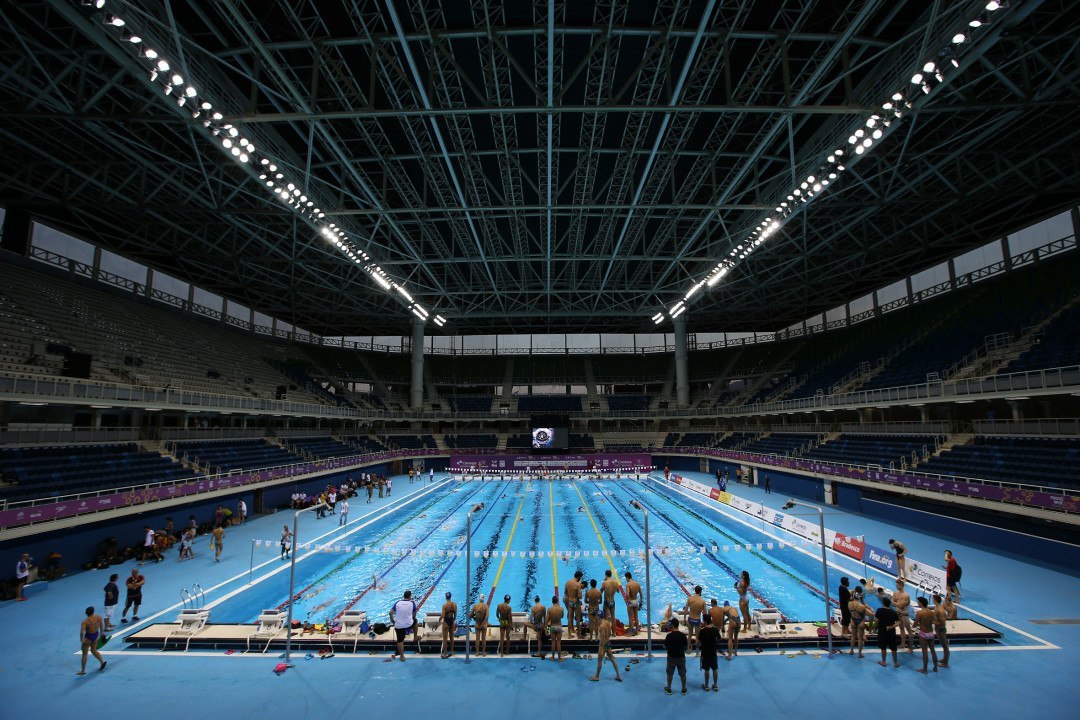 As of noon on Monday, meteorologists estimated that the hurricane had dropped 9 trillion gallons of rain across the Houston area, more than any other tropical storm ever to hit the United States. Archive photo via Satiro Sodre/SS Press

Hurricane Harvey has dumped unprecedented amounts of rainfall on the state of Texas this week, enough, in fact, to fill more than 15 million Olympic-sized swimming pools.

As of noon on Monday, meteorologists estimated that the hurricane had dropped 9 trillion gallons of rain across the Houston area, more than any other tropical storm ever to hit the United States.

It can be hard to visualize numbers in the billions or trillions, but that volume of rainfall could fill more than 15 million Olympic-sized swimming pools.

Converting that 15 trillion gallon number (which has certainly gone up in the day-and-a-half since it was reported) to liters yields 56,781,176,700,000 or more than 56 trillion liters. Dividing that into units big enough to fill an Olympic-sized swimming pool shows that the rainfall from Harvey could fill 15,141,647.12 of the Olympic tubs.

Astute fans will know that SwimSwam headquarters are in Texas, including our editor-in-chief Braden Keith, who lives right in Houston, the city taking the brunt of the hurricane’s force. We’re grateful to report that all SwimSwam staff are safe and accounted for, and even helping others in the area evacuate.

The hurricane has certainly stretched us a bit thin as we endeavor to keep bringing swim fans uninterrupted coverage of the World Junior Championships and other major competitions and news, along with the kickoff to our college swimming coverage. We’re grateful for your patience and support as we work to get fully back on our feet, and we take this week’s disaster as a sobering reminder of the raw power of the water we as swimmers and swimming fans can so often take for granted.

Stay safe, Brandon and everyone in the Houston area!

Brandon, how can I reach you to share how we all can help. phone or email ?

T Hill – if you’re out of town, donations to the Red Cross are the best way to help for sure. We’ll be using our swim network as well to help make connections to those who need it. Texas Ford Aquatics near Dallas has made an offer to train displaced athletes and house a few swim families as well. Stay tuned – we’ll communicate any more efforts that pop up.

How can I reach you to share what we’re looking at doing. email or phone ?

email is best. share@SwimSwam.com. Thanks.

I had no idea SwimSwam Headquarters and Mr. Keith’s home were in Houston! Thanks so much for working to hard to cover a swim meet for our entertainment while you were going through a natural disaster, and good luck to Braden and any other staffers affected by this tragedy!