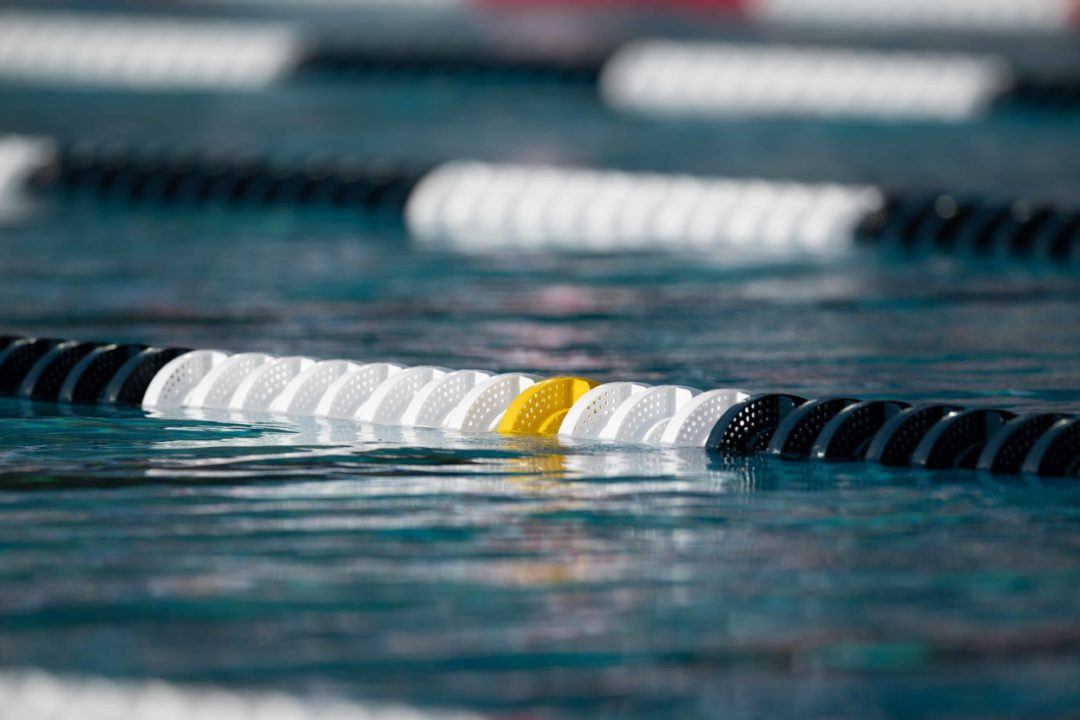 Ronald Hehn is "seeking legal support" after he was fired over what the school is calling "'inappropriate coaching practices." Stock photo via Mike Lewis/Ola Vista Photography

A girls’ high school coach in West Fargo, North Dakota, was dismissed from his position last week after posting a video online of a swimmer wearing a weighted belt in the water and appearing to struggle.

Ronald Hehn, who swam at Indiana University and graduated in 2008, posted a video in a closed swim coaching-oriented Facebook group of a male swimmer with plates totaling 55 pounds hanging from a belt, struggling to stay above the surface. According to Valley News Live, he also has had swimmers go 12 feet underwater wearing weighted belts and swim back up.

The video sparked a substantial debate in the comments and was deleted, but now has been reposted by another user. You can view the video below, which begins with a coach saying “55 pounds. 25 freestyle. Ready, go,” and shows a lifeguard following the swimmer.

Thursday, West Fargo High School announced that Hehn had been dismissed from his position citing “inappropriate coaching practices,” and that boys’ team coach Barb Fisher would serve as the interim head of the girls’ program.

“Mr. Hehn will not have any additional contact with student-athletes in any current or future role as a coach or educator in the West Fargo School District,” said the school in its official statement. “West Fargo Public Schools is committed to providing all students a positive academic, co-curricular, and extra-curricular experience.”

Hehn, who previously served as the head coach at Concordia College and was in his first year with the high school program, defended the technique in a statement to Valley News: “The facts are that this training style was presented at the 2014 North Dakota Coaches Clinic by Sam Freas, head coach at Oklahoma Baptist University,” he said. Hehn added that he would be “seeking legal support.”

Freas is an acclaimed collegiate swim coach who has written multiple popular books on sprinting. He does suggest that weight belt training can be highly beneficial but recommends using only a fraction of the weight the videoed swimmer did. Freas posted the following statement on Facebook:

I received a call today about a high school coach from the Dakotas being dismissed for inappropriately using weights/weight belts in the pool. I was also told that this training method may have been attributed to me. While I am an advocate for using weight belts to improve speed, I would never advocate using as much weight as I’m told this person used. Our average male sprinters (6’3”, 185-210#) wear a maximum of 15# weight belts and swim distances of 12-1/2 yards in shallow water and walk back after each one.

As a comment on Freas’ statement, Hehn responded: “I was fired from a girls coaching position. This is a male athlete. Figure out that logic,” suggesting that the swimmer perhaps wasn’t his athlete, or wasn’t one he was coaching at West Fargo.

However, West Valley News spoke with West Fargo parents who said some of their swimmers “struggled to make it back to the surface and that lifeguards had to pull some girls out of the water because of the amount of weight attached to them.”

SwimSwam reached out to Hehn but has not received comment as of publishing. We’ll continue to update this story should more details come to light.

The kid seemed to be doing fine to me. Although the coaching method does seem a bit extreme…

Yeah, the kid was keeping afloat and the life guard was right there, but the optics are a bit cringe-worthy.

“Doing just fine”. Are you serious?

The way drowning works is you’re “doing fine” until you inhale water when you expectedly plunge underwater due to a 55 lb weight belt strapped to an 80lb kid, and then suddenly are not fine.

I dare say the coach shows a distinct lack of responsibility. The swimmers technique was rendered useless during this exercise: so many better ways to develop power than this ridiculous exercise. If he wasn’t fired for safety issues, perhaps he should have been for giving such a terrible, detrimental set.

Yeah, the best power-developing techniques I’ve found have been resistance training against the direction you are going (i.e. power racks, partner pulls, drag socks, parachutes, vasa trainers (which has slight elevation). When I swam in college (granted 18-22 yr olds with stronger bodies than the kid in the video) we did some weight belt work…usually a 10 lb, but sometimes a 2nd 10 lb belt, but this was done rarely and designed to help underwater kicking and only done for short periods of time. Even for ‘goofing off’ purposes before or after a practice, the coach should have realized the inherent danger of a kid his size and strength to do such a thing (my question is, “Why 55 lbs?… Read more »

Ronald we want to hear your story. Tim help him out.