How The AAU Diving Championships Hosted 200 Athletes With Enhanced Precautions 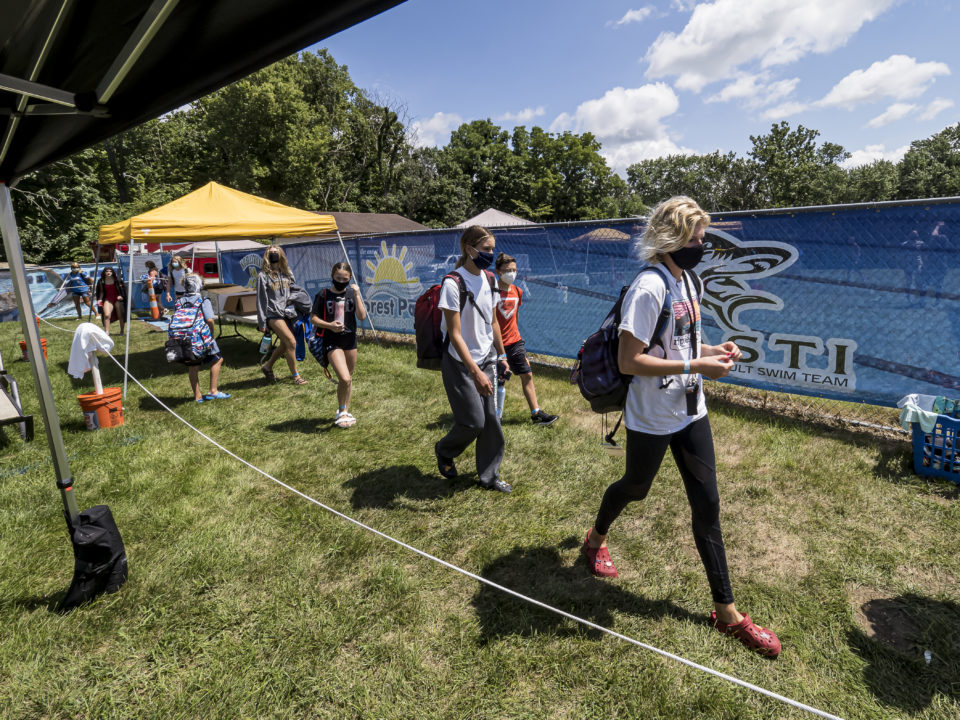 The AAU implemented strict safety procedures, including not allowing families to sit together, in order to prevent the spread of COVID-19. Current photo via Peter Bick

While the majority of aquatic competitions requiring travel haven’t been running in the United States due to the COVID-19 pandemic, the American Athletic Union (AAU) managed to successfully run its 2020 Diving Championships with enhanced safety procedures.

Originally scheduled to take place in San Antonio, the AAU announced it was moving to Noblesville, Indiana, at the Forest Park Aquatic Center in mid-July, just a few weeks out from the start of the event.

There were approximately 200 divers who competed at the meet, which is about one-third the size it would be in a normal year.

Considering the circumstances, the Forest Park facility proved to be an ideal location for the event. The outdoor pool made social distancing relatively easy to implement, and the state of Indiana was doing well in terms of COVID-19 cases when the deal was signed to officially change the meet’s location.

“The pool is probably the best equipped outdoor diving well in the country, which was key,” AAU Diving Director Joe Chirico told SwimSwam in a phone interview.

“When we made arrangements with Indiana, they had one of the best records in the nation five weeks prior (to the event). They had approximately 300 cases per week when we signed the deal, so we thought we were going to be very safe there. As the meet approached it got busier with more cases and we had to change our plans. We upscaled all the precautions almost every week, and we went well beyond what the state of Indiana, the local community healthcare workers wanted.

“They were surprised at the scaling up of the precautions, but we had people coming from states that were a lot stricter, so we pretty much went with the strictest standard we could get.”

These enhanced safety protocols included having everyone masked, a separate entrance for the athletes/coaches and the parents, and keeping everyone at a six-foot distance as much as possible.

Essentially, the meet was run as if COVID-19 was present, because, mathematically, it was.

“On a statistical basis, there were 15 people there with it,” said Chirico, who has experience coaching the US National Diving Team. “We treated it as if everybody had the virus, and it was our job not to spread it.”

“We took out the bleachers and put in lounge chairs for the spectators at six feet apart,” he said. “We required them to wear masks. We also separated the families because we were videotaping everything through the security cameras in case we had to do tracing. When the people signed in we had them sign a release and a self-check health form. That was all done online through their phones, so essentially we had a no-touch registration.”

The competition took place over seven days, as it usually does, with the schedule optimized to keep the divers both in the pool area and in Noblesville for as little time as possible.

Divers were assigned specific pods, meaning they would warm-up with the same group every session they attended. There were also mats set up to indicate where the divers would stand while lining up to wait their turn.

“So essentially we brought a group in, they warmed up, they competed, they got their awards and they went out a separate exit, there was a flow pattern,” said Chirico. “That was a helpful thing. There was no crossover between our groups. If your kid wasn’t competing you weren’t allowed in, pretty simple.”

There were usually three sessions run per day, with four pods of divers competing in each session. After each group was done, there was 30-minute break when the entire area would be sanitized.

Chirico also had the meet schedule organized in order to ensure no athlete or parent was required to be at the meet for all seven days.

“So none of the kids or the parents were there the whole meet, which was also good. It limits their exposure.”

While doing everything they could to enforce things at the pool, one of the biggest worries for Chirico was that they had no control of where any of the athletes, coaches or parents went during their time away from the pool.

“That was one of our largest concerns,” he said. “We had control of the pool area and we did a really good job of enforcing the masks as well as the social distancing.

“We made it really clear to the divers that if this experiment failed, there would probably be no diving meets in the country until this is over, which may be a while. And I think they respected that.”

While implementing these measures worked, as Chirico reports that they’ve had no reports of any cases from the competition, there was a still a bit of negativity from parents who thought the restrictions were too extreme. But Chirico says any backlash was far outweighed by the compliments they received.

“People were grateful that we enforced everything,” he said. “There were a lot of people who were hesitant to come for obvious reasons.

“We had some pushback, but people were very impressed that we were so strict. It outweighed the pushback. I think it made them feel a lot more comfortable, and we had a lot of people saying that they felt safe at the meet.”

Overall the meet was successful, and Chirico hopes other sports can implement similar restrictions in order to begin running larger competitions.

“Everyone is eager to get back to training and competition,” he said. “We found a way to safely do that for the sport of diving. We have a proven model for others to follow. No competition for any sports going to be 100%, but we all still go grocery shopping and do other essential items. To an athlete, competition and training are essential.”

Great example on HOW to address the problem instead of running from the problem. The more you run from your problems, the stronger they get.

I love that they said that, to an athlete, training and competitions are essential.

I’m glad they had the competition. They earned their opportunity to compete.
But I would not subject myself to that much inconvenience just to be able to watch a competition.