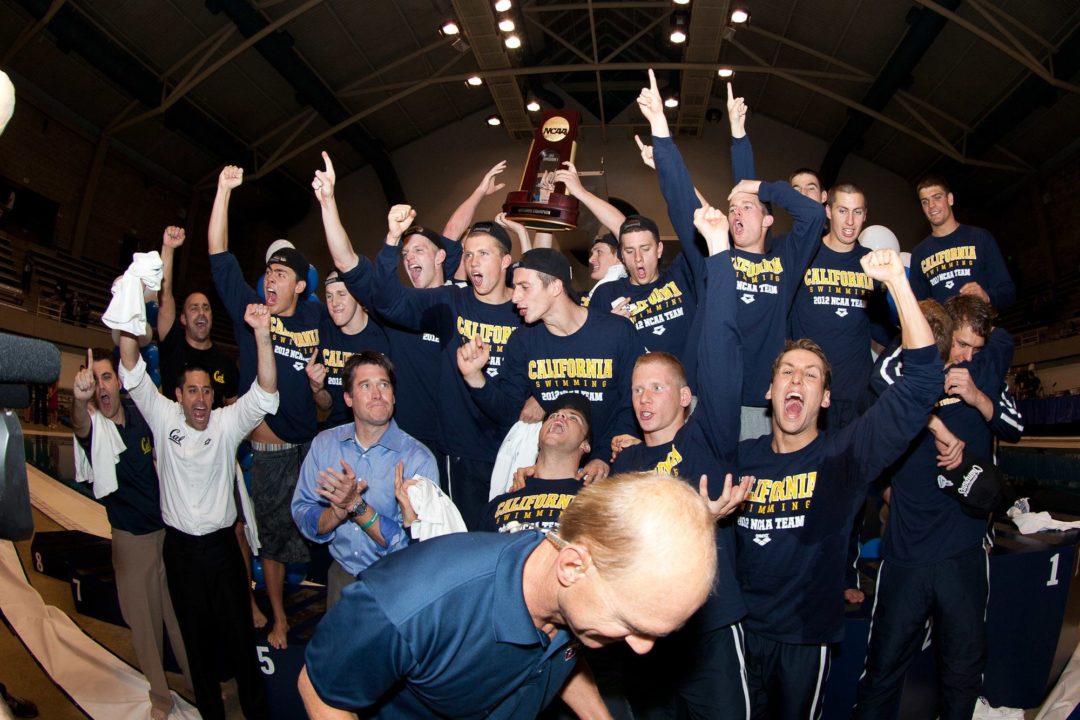 Now that the dust has settled and the Cal men have won their second-consecutive NCAA Men’s Swimming and Diving Championship,...

Now that the dust has settled and the Cal men have won their second-consecutive NCAA Men’s Swimming and Diving Championship, it’s time for us to really turn back around and try to figure out why. How did a team that projected to place 4th or 5th jump three outstanding teams for the win?

The Cal Bears graduated just under half of their individual points, and 14 out of 20 relay spots from last year’s NCAA Championship team, and yet they still outscored last year’s team (and in fact had the highest point total since the dominant David Marsh-Auburn teams from 2003-2007). Was this team better than last year’s team? I don’t think so. It may be every bit as talented as last year’s team, but the 2011 Golden Bears were so veteran, and so experienced, there’s no way that this year’s team was better. They had Graeme Moore, Nathan Adrian, Damir Dugonjic, Guy Barena, Martii Aljand, and Josh Daniels; that’s potentially 5 Olympians and a great relay swimmer all gone from that team.

Texas, on the other hand, returned almost everybody.

So where did those extra points come from to get cal to 535.5 points? For starters, they got much bigger performances from their freshmen. Tyler Messerschmidt and Seth Stubblefield had gigantic swims in the sprint freestyles (they were the only freshmen to score any points in the two sprint freestyles, and they scored a combined 34. Even in the sprint relays – take the entire A-Final of the 200 free relay. There were 6 freshman in the entire field, and half of them (three) were on Cal’s relay. Will Hamilton was a revelation at the end of the year, and won a National Title in the 200 fly. Adam Hinshaw stepped up with big swims in the 400 IM and 1650 free when the Texas Longhorns had small windows to claw back into the meet.  The Cal freshmen outshone every other class in the country – even their rivals from across the bay at Stanford.

There’s another factor in play too, and it’s one that nobody will want to talk about, as it will be perceived as a “slight” to Cal’s title, or taking away from what they’ve done. But it absolutely doesn’t do anything of the sort – sports (especially team sports like college swimming) are about achieving maximum performance in the environment which is presented.

This was a slow NCAA Championship meet. One of the slower we’ve seen in some time. Out of 18 swimming races in the meet, only three had faster champions than last year’s – Tom Shields‘ 100 back, Carlos Almeida’s 200 breast, and the Martin Grodzki-Chad la Tourette record-breaking 1650 free. There were some other exceptions in top-to-bottom speed; take the 500 free. The champion (Grodzki in 4:12.9) wasn’t faster, but the field overall was.

But still, the door was wide-open for the Bears to sneak in and take this title. Arizona and Stanford didn’t swim up to where earlier-season times might indicate they would. Texas took a whole different tact this year and swam almost their entire team through Big 12’s (versus the 5 or so they usually do). They dropped a lot of time from their previous season-bests, but a lot of their big guns didn’t swim as well as they did last year. Dax Hill and Jimmy Feigen got their National Titles that they needed to, Neil Caskey stepped up big, Clay Youngquist and Kip Darmody outperformed as well, but when you’re up against a team with 18 qualifiers, you need a lot of things to go right.

Why it was slower is an issue for debate. The atmosphere in Seattle was a little bit weird. Without a major college team hosting the meet, and a natatorium that wasn’t sold out  immediately, it took some time for the competition to get heated up. But that would have affected all teams equally. Really, it was the effect of a few recruiting classes (up until the class of 2011) that weren’t that deep. After a monstrous class graduated last year nationwide, the lull has been talked about all season.

And then there’s a third huge factor – and that’s the strategy. This is something that only plays into college meets, where there’s the team atmosphere and event limits to play with. On the first day, he was McKeever-esque in leaving his best swimmer (Tom Shields) off of the 200 free relay, and having it still win. The Golden Bears got early momentum – if you watch the broadcast, you’ll hear Rowdy Gaines talk about how important it is, and he’s right. The Bears swam very well day 1, and they just rolled. Tom Shields had an amazing four-event day on Friday to carry that momentum on. He was exhausted on Saturday, and it probably cost him an individual national title, but after Will Hamilton won that race, you could see how well the Bears bought into the “team”.

After winning this one, it will be hard to pick against Cal in future years. They’ve won as big favorites, they’ve won as big underdogs. They probably shift back to “favorite” status next season.

You know, it was slower than last year but it is hard to apply a historical perspective because of the 2004-2009 suit ” issue.” Every year that the suits evolved (body-fastskin1-fastskin2-lzr-jaked) the times got faster so you are really have to do some research to figure out how much slower it is. I remember some events seeming very slow in 2010 but maybe it was because for the first time in a long time, bodies were not compressed from head to shoulder to ankle.In 2010 only one swimmer broke 19 in the fifty, the winning time in the 500 was 4:13 and the mile was around 14;42 I think. The 200 was faster though, more 1:33’s. Maybe these are just… Read more »

where did kip and clay perform?