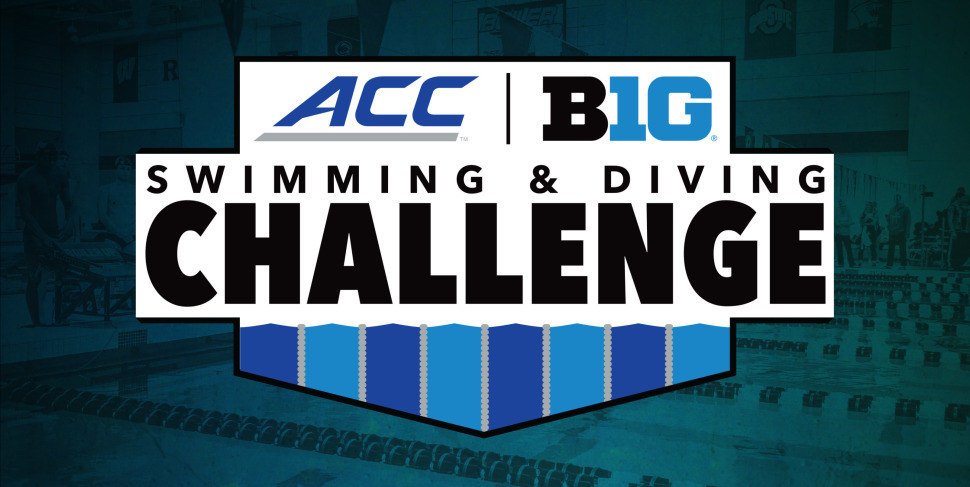 Coaching staffs are taking shape for the inaugural ACC/Big Ten Challenge, with Braden Holloway and Todd Desorbo to lead the ACC All-Stars and Ray Looze and Mike Bottom heading the Big Ten All-Stars.

The new event will take place in November, following the format of the College Challenge, which for the past two years has pitted a collegiate conference against USA Swimming national teamers. The 2016 version of that event was U.S. vs the Big Ten, and last year’s edition was U.S. vs. the Pac-12.

The Big Ten vs ACC meet will be swum in short course yards and will keep a running points tally, scored similar to NCAA dual meets, the Big Ten says. Dual meets typically follow a 9-4-3-2-1 format with the top 5 finishers scoring, up to three for either team. That puts a premium on winning events. Relays are typically scored 11-4-2 for the top three teams, with a maximum of two scoring relays per team.

The full Big Ten press release is below:

GREENSBORO, N.C./ROSEMONT, Ill. – The Atlantic Coast Conference swimming and diving programs will square off against the Big Ten Conference in the inaugural ACC/Big Ten Challenge, the ACC and Big Ten announced today.

The short-course yards dual meet is slated for Nov. 10-11 at the Morgan J. Burke Aquatic Center on the campus of Purdue University.

Ticket and television broadcast information will be available in the near future.

In a similar format to the successful 2016 College Challenge (versus USA Swimming), a running score will be kept throughout the dual meet competition combining the points earned by both women and men. Team scoring will be used to determine a winner of the All-Star meet. Meet scoring will mirror NCAA dual meet parameters.

Swimming students will be determined using a similar selection process to that of the College Challenge, where at least two males and two females from each institution will be designated to compete, but no more than five males and five females from each school will participate. Additionally, for diving students, there will be no more than two males and two females from each school. Numbers may vary based on men’s and women’s swimming program membership, as well as selection to the All-Star team based on personal event times and diving results.

Each athlete may be entered in up to six events during the meet, including individual events and relays.

NC State won the ACC Men’s Swimming & Diving Championship for the fourth straight year in the 2017-18 season, while Virginia earned the women’s ACC title for the 10th time in 11 years. NC State’s men’s squad posted the best finish of any ACC team at the NCAA Championships with a fourth-place finish, and the Louisville women’s team finished in fifth place at NCAAs. NC State’s head coach Braden Holloway will coach the ACC men’s team and will be assisted by Notre Dame head coach Mike Litzinger. On the women’s side, Virginia’s Todd Desorbo will coach the ACC women and will be assisted by Louisville’s Arthur Albiero.

Michigan repeated as the women’s Big Ten Conference Champions in the 2017-18 season, while the Indiana men claimed the 2017-18 title for the second consecutive year. At the NCAA Championships, Michigan led the conference with a fourth-place finish on the women’s side and Indiana finished in third-place for the men. Michigan’s women’s head coach Mike Bottom will lead the Big Ten women’s team, while Indiana’s Ray Looze will coach the Big Ten men.

About the Atlantic Coast Conference
The Atlantic Coast Conference, now in its 66th year of competition and 15 members strong, has long enjoyed the reputation as one of the strongest and most competitive intercollegiate conferences in the nation. ACC members Boston College, Clemson, Duke, Florida State, Georgia Tech, Louisville, Miami, North Carolina, NC State, Notre Dame, Pitt, Syracuse, Virginia, Virginia Tech and Wake Forest continue to build upon the cornerstones on which the league was founded in 1953 with a consistent balance of academics, athletics and integrity. The ACC currently sponsors 27 NCAA sports – 14 for women and 13 for men – with member institutions located in 10 states. For more information, visit theACC.com and follow @theACC on Twitter and on Facebook (facebook.com/theACC).

About the Big Ten Conference
The Big Ten Conference is an association of world-class universities whose member institutions share a common mission of research, graduate, professional and undergraduate teaching and public service. Founded in 1896, the Big Ten has sustained a comprehensive set of shared practices and policies that enforce the priority of academics in the lives of students competing in intercollegiate athletics and emphasize the values of integrity, fairness and competitiveness. The broad-based programs of the 14 Big Ten institutions will provide over $200 million in direct financial support to more than 9,500 students for more than 11,000 participation opportunities on 350 teams in 42 different sports. The Big Ten sponsors 28 official conference sports, 14 for men and 14 for women, including the addition of men’s ice hockey and men’s and women’s lacrosse since 2013. For more information, visit www.bigten.org.

This will be great racing for the athletes and exposure for the colleges. Hopefully this will become an annual meet! #GoB1G

I see the article says the selection process is the same as the college challenge. What is that process?