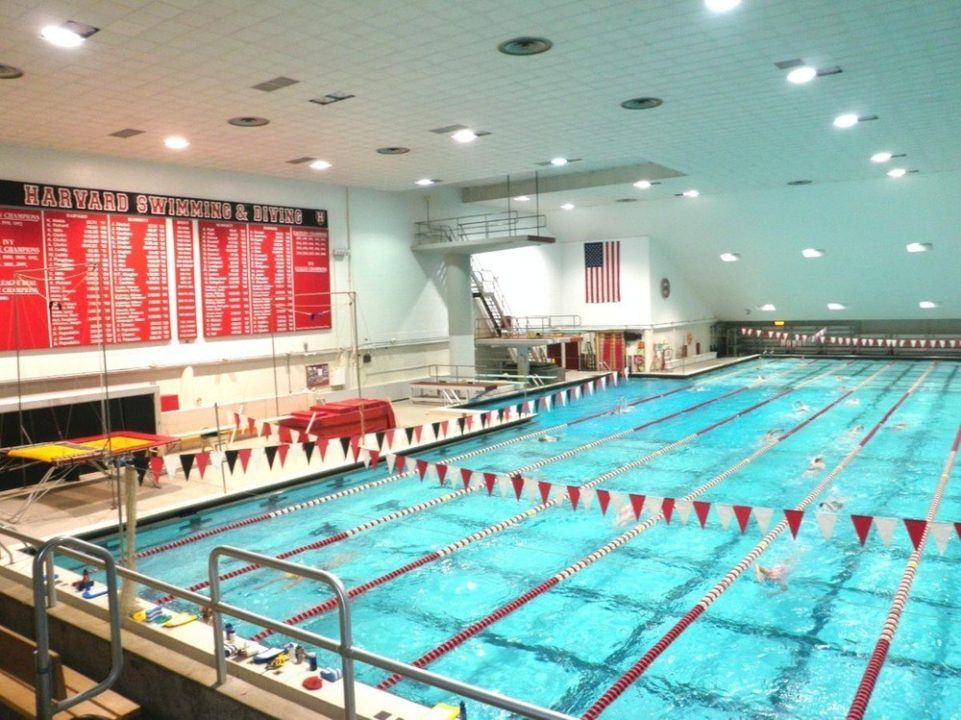 HARVARD vs. PRINCETON vs. YALE

The Harvard and Princeton men were tied after day 1 of the Ivy League H-Y-P showdown, but the Crimson prevailed as they broke away on day 2. Both teams took a win over Yale. Harvard has now won 3-straight in this showdown. They remain undefeated for the season.

The Crimson’s Umit Gures set a school record on day 2. Gures, who won the 50 free on day 1, picked up his 2nd win in the 100 fly. In his first swim under 47 this season, he broke his own school record by a tenth, dominating in 45.48. Freshman teammate Gunner Grant went on to sweep the backstrokes after winning the 100 back on Friday. He knocked 3 tenths off his former best from midseason, winning the 200 back in 1:42.15. Grant has now dropped 2 seconds in the event this season.

The only man to win a double on day 1 was Princeton’s Raunak Khosla, and he accomplished the feat again on Saturday. Khosla took a second off his season best in the 400 IM as he completed the IM sweep in 3:46.59. He added his 4th win of the meet in the 200 breast, blowing away his former best by 7.5 seconds in 1:56.00.

Yale sprint star Henry Gaissert put up a highlight swim for his team, winning the 100 free in 43.49 as he came from behind to beat teammate Joseph Page (43.74). Gaissert was even faster on Yale’s winning 400 free relay, leading off in 43.19. That’s his 2nd fastest swim ever and within a few tenths of a lifetime best. Page had the fastest rolling-start split of the field, putting up a 42.94 on the 2nd leg.

PRINCETON, N.J. – Harvard men’s swimming and diving swept Yale and Princeton at the conclusion of day two of the annual H-Y-P meet on Saturday afternoon. It is the third straight year the Crimson won the meet, improving to a perfect 7-0 mark in Ivy duals.

Building upon a 64-point lead against the Bulldogs on day one, the Crimson cruised to a 222-131 victory. Harvard’s dual against Princeton was a lot closer after day one, tied at 93, but the Crimson pulled away on day two, escaping with the 192-161 win.

The Crimson came out of the gate strong on day two. In the 200-yard medley relay the A-squad of Will Grant, Jared Simpson, Umitcan Gures, and Mahlon Reihman set the tone, posting Harvard’s top time of the season, touching the wall in 1:27.13.

Harvard’s momentum continued throughout the remainder of the second day. In the 100-yard butterfly, Gures took down the program record, touching the wall with a time of 45.48 – a tenth of a second faster than the previous mark, which he also set in last year’s Ivy Championships.

On the 3-meter board, junior Alec DeCaprio and first-year Luke Foster were the Crimson’s top divers. DeCaprio finished fourth, posting a score of 307.60, while Foster was right behind with score of 302.15 in the event.

• First-year Will Grant registered a first-place finish in the 200-yard backstroke. Clocking in in with a time of 1:42.15.

• On the distance side, first-year Cole Kuster registered a season-best time in the 500-yard freestyle, touching the wall in 4:24.13 seconds – besting classmate Noah Brune‘s previous mark by a second.

• Junior Charles Vaughn eclipsed, Daniel Chang‘s season-best time in the 200-yard breaststroke, clocking in at 1:57.33 to claim second place. Chang finished fourth in the event with a time of 1:58.51.

• Harvard’s 400-yard freestyle relay squad of Will Grant, Mahlon Reihman, Corban Rawls, and Ryan Linnihan, closed out the meet finishing second with another season-best time of 2:56.94.

Next Up
Harvard prepares to defend its Ivy League crown when it returns to the pool for the four-day Ivy League Championships hosted at Blodgett Pool on Feb. 26 – 29.

PRINCETON, N.J. – The HYP meet is known for its intensity and electric atmosphere and the 2020 edition lived up to the hype as the Princeton University men’s swimming & diving picked up a 182-171 win over Yale University and came up just short against Harvard University 192-161 Sunday inside DeNunzio Pool.

“We knew we’d have a battle on our hands with both teams today and that’s exactly what happened,” said head coach Matt Crispino. “I’m proud of our guys for being resilient and earning a hard fought victory over Yale. The breaststroke crew, led by Raunak, was huge. This weekend was a great step forward toward the Ivy League championships in four weeks.”

Raunak Khosla continued his outstanding season, picking up victories in the 400 IM with a time of 3:46.59 seconds and the 200 breaststroke after he touched the wall at 1:56.00 seconds. Both times were NCAA B cuts and his time in the 200 breaststroke was the third-fastest time in program history.

Princeton also picked up a pair of second-place finishes; the team of Derek Cox, Daniel Arris, Nicholas Lim and Charles Leibson took second in the 200 medley relay in 1:28.00 seconds while in the 500 freestyle Roman Horoszewski finished in a time of 4:24.96 seconds.

Up Next
The Tigers will take on Columbia University on Saturday, February 8 at 2 p.m. inside DeNunzio Pool in their final regular season meet.

PRINCETON, N.J. – Following a difficult first day, the Yale men’s swimming team gave its all this afternoon in the final events of the H-Y-P meet. While the Bulldogs did fall to both the Tigers and the Crimson, their effort on Day 2 led to the competition being a much tighter affair. Yale lost to Harvard 222–131 and to Princeton 182–171.

The freestyle event was strong for Yale throughout this meet. Henry Gaissert continued his senior year brilliance, winning the 100-yard freestyle with a rapid 43.49 finish. Philippe Marcoux was close behind, taking second with a time of 43.49.

Christian Bell took home third in the 200-yard backstroke with a final time of 1:45.79. Similarly, Patrick Frith was third in his 100-yard butterfly event, posting a strong 47.71 finish.

Yale shined in the diving, capturing a crucial victory. Christian DeVol and JP Ditto took first and second in the 3-meter dive with scores of 339 and 321.20 respectively.

The Bulldogs were once again superior in their relay events, especially in the 400-yard freestyle relay. The team of Gaissert, Joseph Page, Nathan Stern, and Marcoux blew their competition out of the water with a blistering 2:53.86 time to secure first.

Yale gets back to work at the Ivy League Championship later this month.

Dreaming. A Khosla-led Princeton will never crack the NCAA top 20. Harvard will be top 5 next season.

Best swimmer out of anyone in the Ivy League by far.

There was no H-Y-P for the men in 2016-17. They beat Yale in that year, but the Princeton men’s team was suspended. I believe that’s why they only alluded to three straight in their press release. In the season prior to the suspension, Princeton had won the tri-meet.

Sort of. In 2016-2017, the Princeton suspension meant there was no HYP meet. So, they haven’t LOST HYP for 4 years, but they’ve only WON 3 straight HYPs. Princeton won the year before their suspension.

What’s up with Will Grant being called Gunner?

Seems to be a nickname. That’s what he’s been called in a lot of their press releases.