Handling The COVID-19 Break Is Nothing New For Peter Lermo 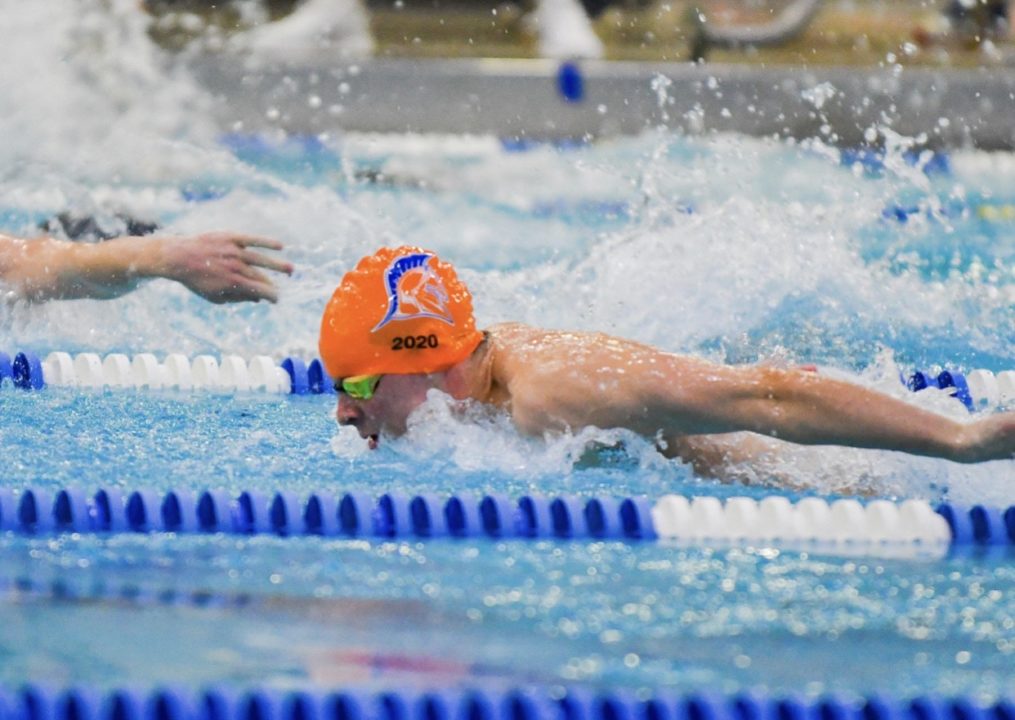 Lermo, a member of the US Paralympic National Team, is familiar with taking extended time out of the water due to surgery. COVID-19 is just another challenge. Archive photo via Peter Lermo

The COVID-19 pandemic has forced swimmers to sit out of the water for an extended period of time. For many, this has been the longest break from the sport for five or 10 years, and it can be very discouraging.

All of the recent progress made in the pool will largely be gone, and you’ll have to essentially start from scratch when things get back up and running. In some respects, the path to regaining your previous form, much less dropping time, seems quite daunting.

However, for Peter Lermo, this type of setback has become commonplace over the last six years of his life, and he’s confident that he and everyone else going through this will persevere if they’re willing to put in the work.

Lermo, a member of the 2020 USA Paralympic National Team who competes with Machine Aquatics, was born with leg length discrepancy, a condition where one of his legs was naturally longer than the other and grew at a disproportionate rate.

This condition led to a series of surgeries, the first occurring in February of 2014, where the Springfield, Va., native was forced to take an extended break from swimming.

“Basically what they did was they cut open the sides of my knee, at my tibia and femur, covering both bones with plates and screws that would arrest the growth in my right leg,” said Lermo, who actually first got into swimming after breaking his arm playing soccer. “This allowed my left leg to continue growing while my right leg was temporarily stopped so that they could be even again.

“After that first procedure, I didn’t really do well in the pool. I swam at the PVS Junior Olympic meet at the University of Maryland in March, and it was atrocious. All of the hardware damage that they did on my leg, putting hardware in is a lot more traumatic on your bones because they’re drilling holes and stuff like that and it takes a little bit more time for a hardware surgery to recover just because it’s very rough.”

It would take Lermo until the long course season to begin approaching his best times again. After a difficult recovery process that included spending time in a wheelchair, he would make his first Zones cut during the summer.

In January of 2015, he had the hardware removed his femur, and then in August, it was taken out of his tibia. Comparatively, these were “relatively easy” procedures that he was able to bounce back from.

After getting his growth plates removed for good in April of 2016, an issue with his foot was identified, requiring another surgery.

Corrective left foot surgery was performed in September of 2017, causing him to miss the first 4-5 months of the competitions season, and every team practice until late November.

The constant starting and stopping began to really take a toll on Lermo, not just physically, but also mentally.

“I had kind of seen a pattern where I would have surgery, get back into the pool…I’d get fast. I’d be as fast as my peers,” he said. “And then I’d get surgery again and I’d have to start over at square one.

“That aspect of it made it more challenging mentally because I would always overthink and ask these questions. ‘Peter are you going to get surgery again? Are you ever going to get fast, are you ever going to catch a break where you won’t have surgery?’ For a while, I thought that answer was no, and that was very depressing for me. I wasn’t at a very good spot in my life. I was depressed, I was upset.”

Leaning on friends and family, while also working on improving his own mental space, has helped Lermo persevere through his numerous setbacks.

The month of May is Mental Health Awareness Month. If you saw my live on May 4th many of you may know that I have had multiple corrective surgeries, and other various injuries. Many of you did not know that I was very depressed for a couple of years, because I felt like I was never going to be completely healed. My surgeries felt like a vicious cycle-I’d get back in shape, do well at meets, then have surgery (again)- and for a while I wondered if it ever would end. I never got help, maybe because I thought I didn’t need it, maybe because I was too afraid to ask, but I was able to work through it, because I never wanted to see myself quit, and let my injuries get the best of me. That being said, please don’t make the same mistake I did. If we all struggle internally, bottle our emotions, and never tell anyone what’s going through our minds, it can lead to stress and other unhealthy ways of coping with our thoughts. During those times, I was a pain to be around because oftentimes when I was recovering I was so negative. However, the love and support from my friends and family inspired me to be a better person and be a better athlete. I realized after my last surgery that it only got easier for me to get back in the pool because I had done it so many times. I finally turned my attitude around and understood that I can work my way up again. For a while, I had a longterm goal of qualifying for junior nationals. I didn’t know when, I didn’t know how, I just wanted to make it happen. With little distraction, a lot of effort, and a lot of detail work in and out of the pool, I did it. No matter how hard things may seem, no matter how hard you may struggle, the tides will turn in your favor eventually, and if you look hard enough, you will find greatness. There were many factors I couldn’t control, like when I was having my next procedure. But the things you can control (sleep, foods you eat, people you hang out with, etc.) are the things we need to focus on, so we can ensure we did everything we can to get to that next level. So, don’t be afraid to get help, it’s ok to let our emotions out! Be yourself, find happiness, and spread love and positivity to help us make the

In total, the 18-year-old has gone through seven surgeries during his swimming career (eight including the broken arm that got him into the sport), and he has managed to continually come back stronger.

In addition to May being Mental Health Awareness Month, Lermo’s motive for sharing his story is also to provide some inspiration to those athletes who doubt their ability to return to form after the COVID-19 storm has passed.

“A lot of people on my team that are a little bit younger are kind of discouraged, and I totally get that,” he said. “I was very discouraged when I heard NCSAs was cancelled this year,as well as the Paralympic World Championships in Indianapolis. So it was kind of difficult to cope with the situation at hand right now. I was upset, I was angry for a while. Not at myself, not at anyone else, but just what the world has come to, and I had told the younger kids, look, it is possible to come back even if we’re out of the pool, for no matter how long. It’s going to be hard, it’s not going to be easy, it’s not going to be fun either.

“That first couple of weeks can be very challenging because your body hasn’t necessarily been used to doing that kind of work or those workouts, or whatever you’re doing to get back in shape. And when your body’s not used to it, it struggles. Once we get over that hump and once we get over that initial struggle it only gets easier, you just have to work through it. That was something I had done every single time.”

While he acknowledges that a forced break due to pool closures and having a traumatic surgery are two very different things, Lermo draws some parallels and is using his experience to inspire the younger generation.

“That was something I had always worried about, no matter what surgery was,” he said. “Easy or hard, I was always wondering if my body was going to get to its peak point. At a young age if that happened it would’ve been very heartbreaking to me.

“So those were a couple of the thoughts going through my mind earlier this year when I heard that corona was cancelling everything, and that was something that had always gone through my mind after every surgery.”

After his final surgery last August, a minor foot procedure, Lermo had a breakout performance at the NCAP Invite in December, dropping eight seconds in the 400 IM to make an NCSA cut, something he had long doubted he could do.

“I never expected to get it, because there was this vicious cycle in my mind where I’d get fast but not fast enough for an NCSA cut, or whatever cut I wanted,” he said. “And finally, that cycle was broken.”

It wasn’t until recently, after a suggestion from one of his coaches, that Lermo began pursuing competing as a para-athlete. He’s classified as S10/SB9/SM10, the lowest level of disability.

Now a member of the Paralympic National Team and committed to swim at Mary Washington University in the fall, Lermo, like the rest of us, is just waiting until things get back to normal. But one thing we know for sure is that when they do, he’ll be ready.

“No matter how hard we struggle, no matter how hard things may seem, the tides will eventually turn in your favor and you will find greatness if you keep believing in yourself,” he said. “As far as I know, I’m done with all my surgeries. The only thing holding us all back now is the coronavirus.

“We can get back in shape, we can do anything we want to do as long as we believe in ourselves, we have a goal and we set our mind to it.”

Thank you so much!!

It’s been a joy watching you this season and can’t wait to see more from you! Thank you for sharing your story! You’re an inspiration!