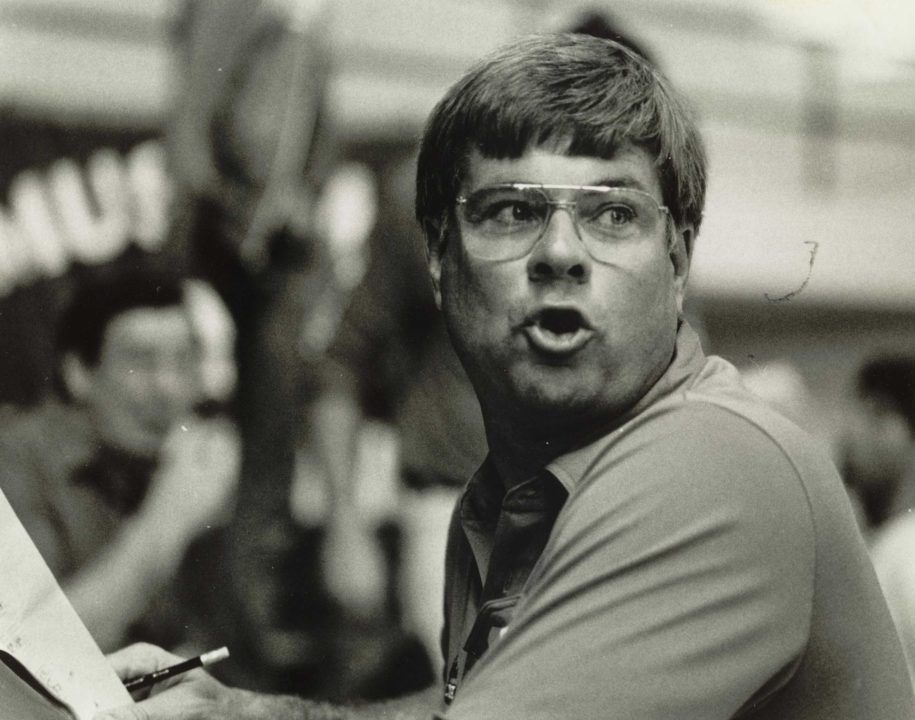 Jochums placed a swimmer on every American team traveling to a major international event from 1968 to 2006, with the lone exception being the 1996 Olympics. His swimmers broke 25 world records and brought home 12 Olympic medals, including two golds. Jochums served as an assistant or head coach on eight U.S. national teams.

Jochums began his coaching career as an assistant at the University of Washington, where he had competed as a collegiate swimmer under John Tallman. He also worked as an assistant at Cal under the guidance of Pete Cutino before taking his first head coaching job at Cal State Hayward. After a stint at Long Beach State, he returned to the Pac-12 (then Pac-10) in 1978 to lead Arizona’s program. In 20 years at the college level, his teams tallied 12 top-10 finishes nationally.

He transitioned to the club level in 1995 and won three national titles with the Santa Clara Swim Club’s men’s team (1996-98) while earning 18 top-5 finishes. In 2007, he retired from full-time coaching with an impressive resume. Jochum’s swimmers combined to set seven NCAA records and 60 American records in total.

An early proponent of high-quality interval training, Jochums developed a reputation as a middle distance guru. Tim Shaw, recipient of the 1975 James E. Sullivan Award for the nation’s top amateur athlete, once simultaneously held world records in the 200, 400, 800, and 1,500 freestyle. Jochums coached the last club team to set a world record in 1975 when his Long Beach Swim Club quartet of Rex Favero, Bruce Furniss, Shaw, and Steve Furniss lowered the global standard in the 4×200 free relay.

At the 1975 World Championships, Jochums’ swimmers topped the podium five times. Shaw racked up three gold medals, Greg Jagenburg won two, and Steve Furniss added one. But Jochums’ impact was perhaps felt most the following year at the 1976 Olympics, where he put seven swimmers on the U.S. men’s team. Five of them — Shaw, Bruce Furniss, Dan Harrigan, Steven Gregg, and Jack Babshoff — won medals in Montreal.

During the next Olympic cycle, he trained a pair of medal contenders in Bob Jackson and Jagenburg, but the U.S. ultimately boycotted the 1980 Summer Games in Moscow. Jochums also mentored 1984 Olympic medalists George DiCarlo and Peter Evans as well as 2000 Olympic medalist Tom Wilkens.

Jochums has received several honors recognizing his contributions to the sport. In 1974, he was named Coach of the Year by the American Swim Coaches Association (ASCA). Thirty years later, he was inducted into the ASCA Hall of Fame. Jochums was also chosen for the International Swimming Hall of Fame in 2017. In 2019, he was selected into the Aquatic Capital of America Hall of Fame located in Long Beach along with the Furniss brothers.

It was some 50 years ago. At that time I was a distance freestyle swimmer from London, England who had always wanted to be a swim coach. I had just finished a swimming coaches course but I felt I needed to know more before I started out. So, after saving all my money, I travelled all the way across the pond to California to visit the famous Long Beach Swim Club.That was when I first met the then Head Coach Dick Jochums. He had a swimmer by the name of Tim Shaw who was dominating world distance freestyle. Looking back now, I realize that he was absolutely instrumental in helping me to form my identity, not only as a coach… Read more »

My mentor and coach and who drilled into me who I became today and I am so grateful because if I live through what I am going through it will be because of what this guy did to all of me and my entire team when we were kids which was work the crap out of us, never coddle us, demand perfection then took the time to teach that with the discipline to follow through to become ‘excellent’~ I will never forget him~

Dick made me tougher. Wanted to hang up my swim cap one practice at UofA and I got out of the water in the middle of practice. He said(haha okay, he yelled), “Where are you going?”. My response was, “I am not doing this anymore.” He said, “Get Back in the water!” I did. 😄 Thanks Dick for showing me I am tougher than I thought.

I once read an article by or about Dick where he clearly described the process of achieving swimming excellence as being about “agon” and “arete”. That article really went a long way to shaping my own coaching philosophy. I never met Dick, but I am forever grateful for his effect that he had on me.
Everyone that I knew that swam for him talked about the great life’s lessons that they learned from him.
Rest in Peace…..

Gold in the Water made me love this guy. Unreal career. May he rest in piece

He always told me “I want to be tied to a tree with a bottle of whiskey”. Hope it went something like that my friend. RIP and see you soon

Some of my favorite DJ quotes from when I swam for him:

“Real men cry, but not over a swim race.”

If you were feeling down or frustrated:

“Just remember, there’s a billion Chinese people who don’t much give a sh!$.”

To say that Dick was a personality is an incredible understatement.

Dick was a good man.

One of a kind and a legend. Thanks, Coach.