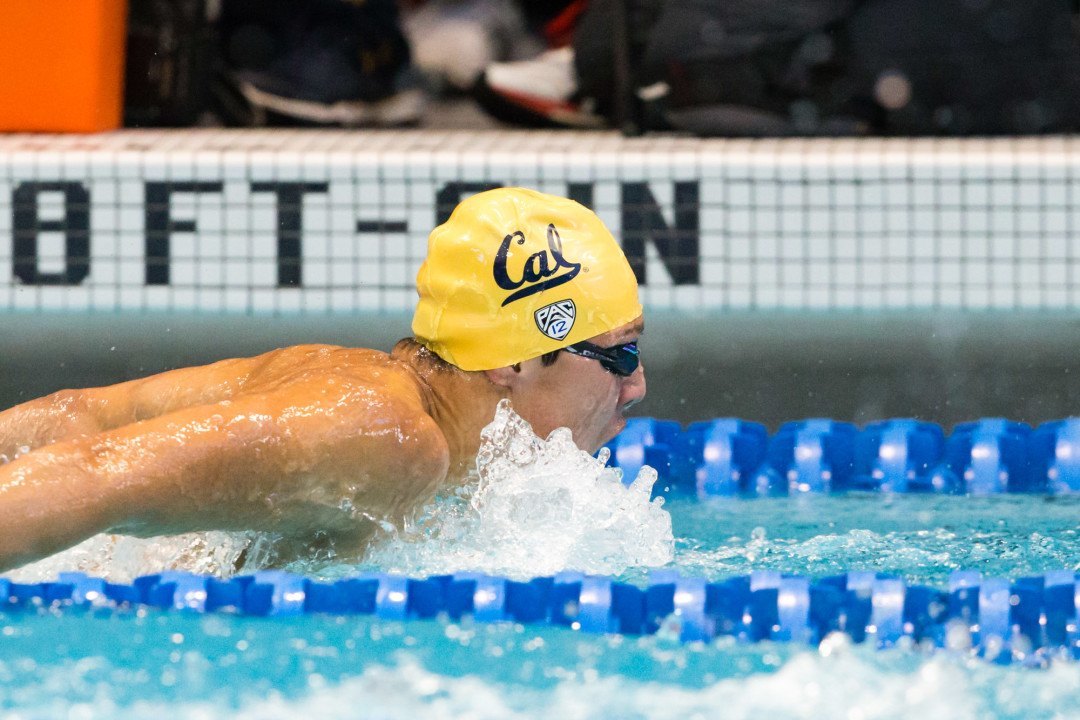 Cal's Long Gutierrez was back in action today in the Golden Bears' first meet of 2017. Transfer Matt Josa also made his season debut, swimming in his first NCAA meet with Cal. Archive photo via Tim Binning/TheSwimPictures.com

Cal’s Long Gutierrez was back in action today in the Golden Bears’ first meet of 2017, as the Cal men and women both brought home a victory over Arizona on the road. He and teammate Ryan Murphy battled closely in the 200 free, with Gutierrez taking the slight edge on the final 50 to win in 1:36.62 to Murphy’s 1:36.89. Additionally, Gutierrez won the 100 free, posting a 43.71 to lead a 1-2 finish with freshman teammate Michael Jensen (44.57).

After taking a close 2nd in the 200 free, Murphy came back to win the 200 back by 6 full seconds with a quick 1:43.25. The backstroke ace didn’t swim both distances of his stroke specialty today, however, as transfer Matt Josa took over the 100 back in hs first appearance for Cal in the NCAA. He won that race handily with a 48.97. Josa then went on to take 2nd in the 100 fly, clocking a 48.18 behind teammate Justin Lynch (47.81). Both Josa and Lynch swam butterfly on the 200 medley relays, each clocking a time in the 20.9-range.

On the women’s side, the Bears decided to change things up on their 200 medley relay today, using freshman Abbey Weitzeil on the breaststroke leg rather than their traditional breast option Marina Garcia, who swam on the B-relay. Weitzeil’s 27.54 split was over a second faster than anyone else in the field as she helped the Bears to their winning time of 1:38.15.

TUCSON, Ariz. – Racing for the first time since December and removed by only a few weeks from training at altitude, the Cal men’s swimming team returned to competition in style as the Bears posted the top time in every event to score a 161-113 victory over Arizona in a Pac-12 dual meet in Tucson.

Cal, which improved to 2-0 in dual meets in 2016-17, didn’t wait long to find its rhythm as the No. 1-ranked Bears kicked off the second half of their collegiate season. The team of Ryan Murphy, Connor Hoppe, Justin Lynch and Pawel Sendyk stopped the clock in 1:27.67 to win the 200-yard medley relay and beat teammates Mike Thomas, Carson Sand, Matthew Josa and Michael Jensen, who finished second.

Success carried into the distance freestyle as Ryan Kao and Ken Takahashi combined to finish 1-2 in the 1,000 freestyle. Kao’s winning time of 9:23.76 is a season-best for the junior. The distance shortened with the 200 free but Cal teammates again battled for the win as senior Long Gutierrez finished in 1:36.62 to place just ahead of Murphy and Kyle Coan.

Josa found himself in the winner’s circle in his first dual meet as a Golden Bear, clocking a time of 48.97 to lead a trio of Bears – Thomas and freshman Andy Song included – in the 100 backstroke. Senior Hunter Cobleigh followed with the first of two wins on the day, out-touching Hoppe to win the 100 breaststroke with a time of 54.88. That pair battled again in the 200 breast and again Cobleigh prevailed with a time of 1:59.00 but this time fellow Golden Bear Carson Sand got into the mix, narrowly pulling into the wall for second ahead of Hoppe.

The Bears proved proficient in the sprint freestyle events as well, showcasing a bit of their youth as well as some veteran speed. A pair of freshmen, Jensen and Sendyk pulled away in the 50 free with Jensen getting the win in 20.09. Gutierrez added some experience to the mix as the senior finished in 43.71 to finish just ahead of Jensen and win the 100 free.

Sophomore Nick Norman and freshman Andy Song made it a distance freestyle sweep for the Bears as Norman won the 500 free in a time of 4:29.12 and Song placed second ahead of four Wildcats. Cal also earned its share of points in diving as freshman Connor Callahan continued a strong stretch of competition with wins in both the 1-meter and 3-meter. In both cases, Callahan set a season-best in scoring, recording a mark of 314.48 in the 1-meter and 346.65 in the 3-meter.

The Bears wrapped up their day with a strong performance in the 400 free relay as the team of Gutierrez, Dillon Williams, Josa and Lynch finished in 2:58.96 to touch the wall first.

Cal won’t wait long to jump back in the water. The Bears head to Tempe on Saturday for an 11 a.m. showdown with Arizona State. The meet will be streamed live through Pac-12.com and the Sun Devils’ website, TheSunDevils.com.

Freshman Abbey Weitzeil swept the 50 and 100 freestyle events, while sophomore Amy Bilquist captured the 100 and 200 backstroke, and junior Noemie Thomas claimed the 100 and 200 butterfly. Bilquist remained undefeated in either backstroke in dual-meet competition this season, and the same holds true for Thomas in both butterfly races and Weitzeil in the 50 free.

The Golden Bears picked up one victory each from senior Marina Garcia in the 200 breaststroke, senior Celina Li in the 200 individual medley and sophomore Phoebe LaMay on the 3-meter springboard. Cal also prevailed in both relays – the 200 medley and the 400 free.

The meet was the Bears’ first since returning from a 10-day training trip and coincided with the end of the first week of the spring semester.

“The first meet is always a little tough because of the transition back to school and our regular routine,” head coach Teri McKeever said. “With good leadership from our senior class, I thought we really stepped up in the second half of the meet. I like the way we responded after being challenged. This was a total team effort.”

Cal won four of the first eight races, then took seven of the last eight events, including a 1-2-3 finish by Weitzeil, senior Kristen Vredeveld and senior Farida Osman in the 100 free.

The Bears return to action on Saturday, facing off against Arizona State in Tempe at 11 a.m. The meet will be streamed live at this link.

TUCSON, Ariz. – Arizona swimming and diving dropped its first Pac-12 home meet to California on a chilly day in Tucson. The tenth-ranked women couldn’t hang on and ultimately lost to the No. 2 Bears, 119-181. Meanwhile, the No. 11 men were out-scored by first-ranked California, 113-161.

Freshman Hannah Cox had a standout performance against California, winning two of her three events. Cox outdueled California’s Katie McLaughlin to win the 200 free by five-hundredths of a second, touching in 1:49.43. The freshman later dominated the 500 free, winning by a body length with 4:52.78. This is her fourth victory in the 500 free this season, one coming against No. 8 USC. In her final event, Cox was runner-up in the 200 IM with 2:02.26.

In diving, senior Sally Hackett contributed points for the Wildcats as she won the 1-meter with a score of 295.80. She later placed second in the 3-meter with 263.70.

Junior Tjasa Oder showed off her distance skills, winning the 1,000 free with a time of 10:04.42 and over a body-length lead from the next swimmer. Sophomore Sarah Shimomura placed third in the event (10:11.61) followed by freshman Kirsten Jacobsen (10:12.19).

The women had multiple swimmers in the top three in five events, including a 2-3 finish in the 400 free relay to close out the meet.

Freshman Steven Medvedev also had a second-place finish in the meet, coming in the 200 back with a time of 1:49.25.

Up Next: Arizona swimming and diving hosts Stanford on Sat. Jan. 21 at 12 p.m. MST at Hillenbrand Aquatic Center.

I can already hear Bobo saying that Cal is ruining Weitzeil by having her swim breastroke on a relay.